Porto’s Bakery & Cafe in Burbank was named the highest rated restaurant in 2016 on Yelp’s list of the 100 best places to eat in the United States.

Business owners attribute the win to social media and their young customers who regularly seek out reviews on Yelp to choose what businesses to patronize as well as offer their own recommendations. 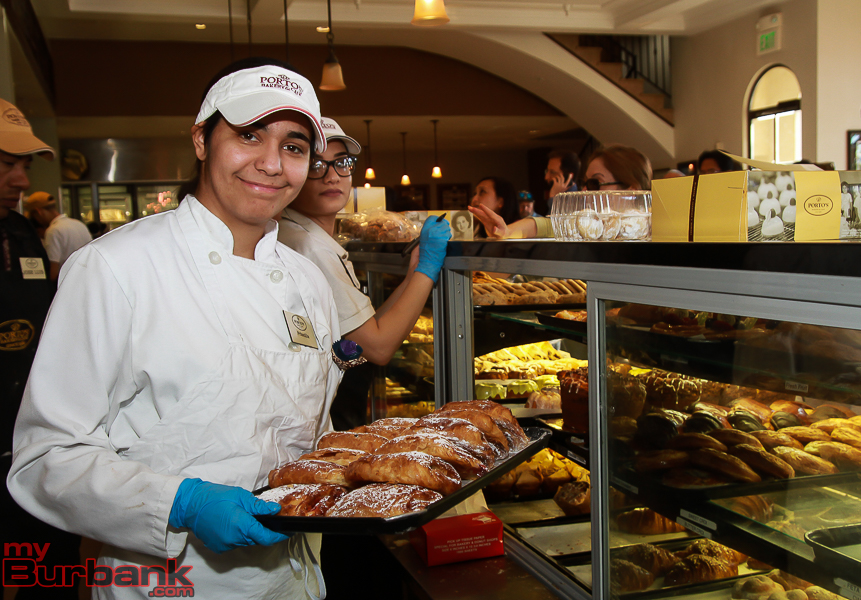 The reason for the Burbank location’s popularity is the same one for all the stores, said Betty Porto, vice president of community relations.

“It’s the quality, the prices and customer service,” she said. “But we also have the studios nearby and younger people and families that use social media — Facebook and Yelp — to share their experiences and encourage new customers.”

The Burbank Porto’s, just like the other locations in Glendale and Downey, are consistently busy. While it’s not unusual to see a line of people stretched out the front doors on a weekend, the bakery’s efficient staff keep the queues moving. 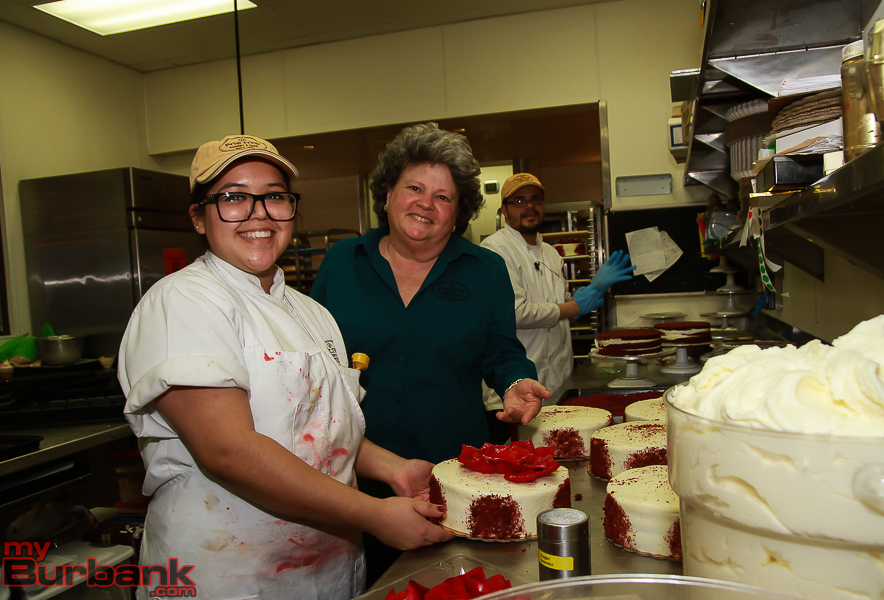 Porto also credited the company’s philosophy to change up its menu as a great way to keep customers coming back.

For the Lenten Season, Porto’s has introduced ceviche with shrimp, New England Clam Chowder and the new seafood potato ball with squid, shrimp and white fish.

“We are introducing these new food items to keep things exciting for our customers because people need to have excitement in their life,” she said.

Yelp, the user-contributed rating website, analyzed a variety of data points from past reviews and announced the findings last week on its blog. 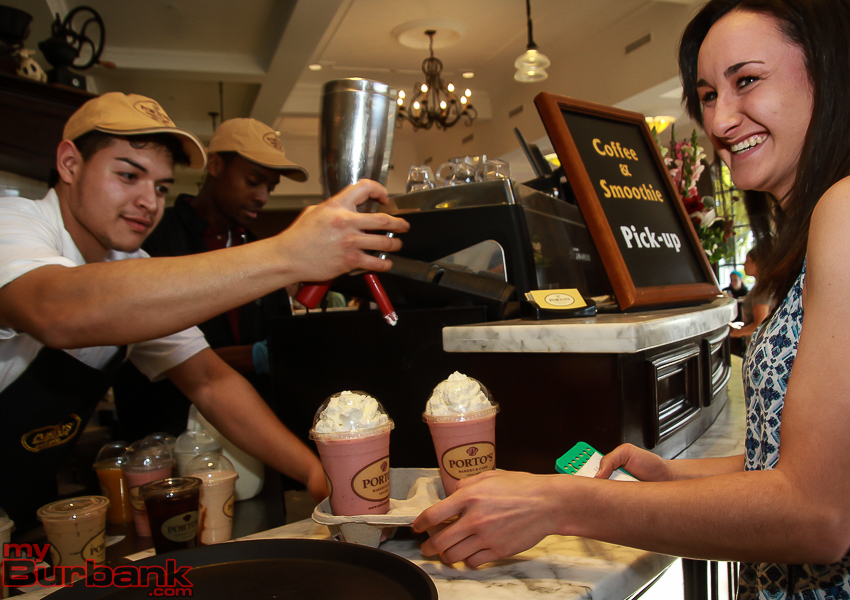 Each restaurant was ranked based on a combination of factors, including the total number of reviews and average rating. Businesses with multiple locations listed were ranked based on the highest rated location. Porto’s Bakery & Cafe locations in Glendale and Downey were also ranked in the Top 100 of this year’s list. The 2016 ranking is based on the aggregate popularity of each restaurant and reviews were considered since the founding of Yelp in 2014.

Porto’s Bakery has made the Yelp list top ten for the past several years, but 2016 marks the first year the Southern California spot has hit number one.

“We come to work every day because we have a passion and our family loves what we do,” added Porto. 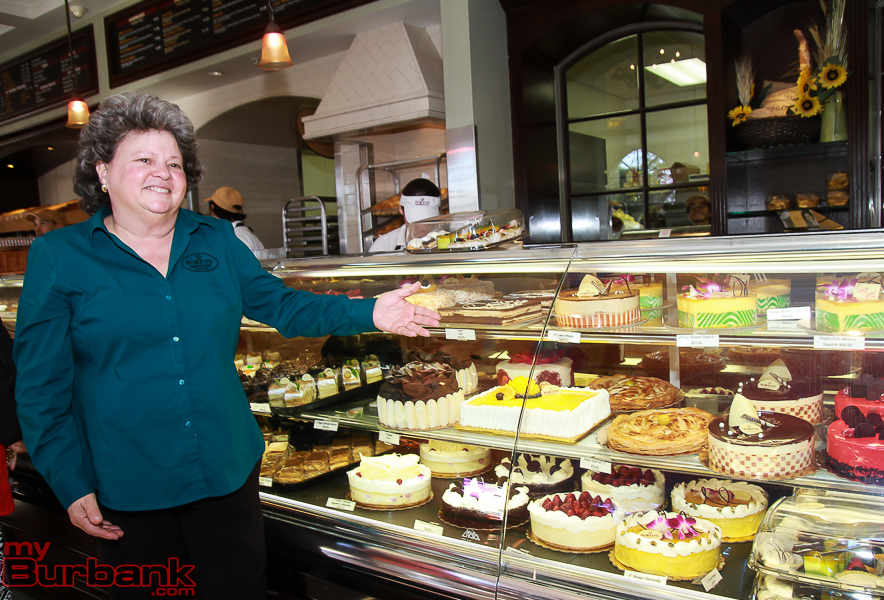 Being named the top place to eat in the U.S. by Yelp users “lets us know we are doing something right, especially with the youth.”

She also talked about the bakery’s connection with the Burbank community, noting the bakery is very involved in supporting local grassroots organizations, schools and service groups.

Porto’s Bakery & Cafe was founded by Rosa Porto in Manzanillo, Cuba, shortly before the Porto family emigrated to California. The demand for her cakes grew from the humble origins of the family’s home to the three current locations in Glendale, Burbank, and Downey. 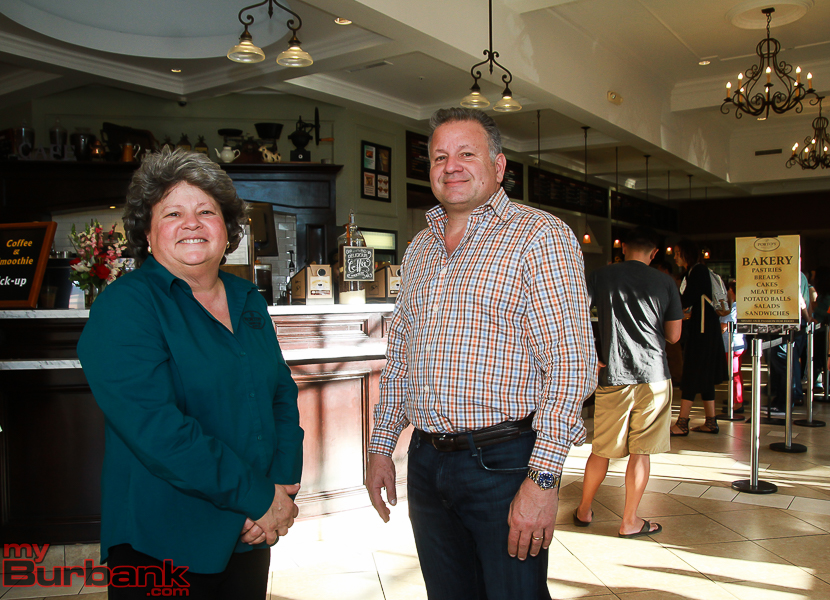 Betty and Raul Porto. (Photo by © Ross A. Benson)

Two new locations are planned, Porto said. The chain is building a new bakery from the ground up in Buena Park, which is scheduled to open in 2016. Then work will begin on a West Covina site, with plans for doors to open in 2017. Managers are already being trained for the new stores at the Glendale, Burbank and Downey locations.

Betty and Raul Porto. (Photo by © Ross A. Benson)

The court cases of police officers took another turn today as the Ninth Circuit Court of Appeals reversed the lawsuit the Angeleo Dahlia filed against the City of Burbank and other individuals after his firing from the police department.

Judge Harry Pregerson stated,”that plaintiff’s speech that reported unlawful acts by his fellow officers was protected under the First Amendment from retaliation by his fellow superior officers at the Burbank Police Department regardless of whether he reported the police abuse up the chain of command or outside the chain or command.”

Here is the complete text of the decision that was handed down on August 21.  City of Burbank officials have yet to comment on the decision 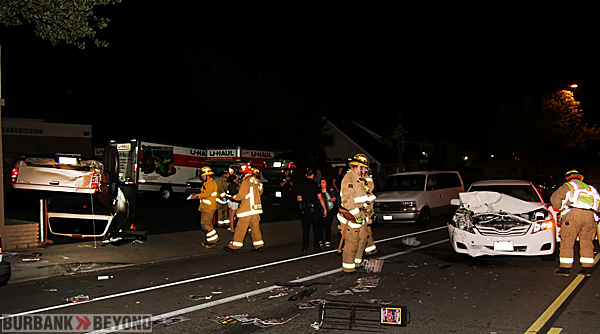 Burbank Firefighters survey the damage and treat a driver at the scene of this overturned truck on Verdugo west of San Fernando, Sunday evening. (Photo by Ross A. Benson)

Burbank Police were first to arrive and they found the the driver of the pickup had self-extricated herself, but needed Paramedics to look at a bloody knee. 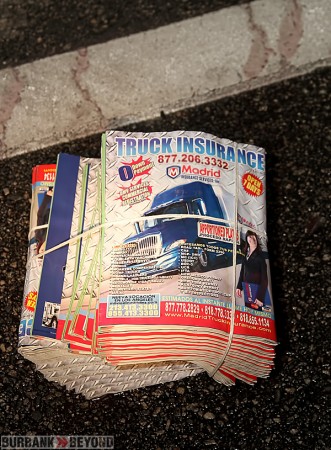 The Title says it all, the magazines that were thrown from the pickup were being distributed, and there auto truck magazines, with an ad for truck insurance on it’s cover. (Photo by Ross A. Benson)

Apparently the driver of the pickup was delivering magazines and racks and was pulling into the driveway of the auto repair business when she was struck from behind and overturned. The lone female occupant of the pickup was transported to a local hospital with minor injuries, the other car suffered moderate damage and required towing.

Thousands of copies of the magazine she was distributing ended all over the street, with it’s cover highlighting truck insurance, which we hope she had. 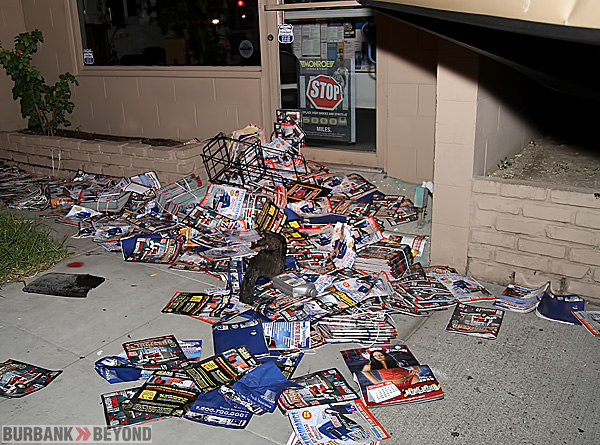 Debris that was thrown out of the rear of the pickup after it was overturned. (Photo by Ross A. Benson)

At around 10:15 p.m. Sunday night, Burbank Fire and Paramedics along with Burbank Police responded to reports of a two car traffic collision with a vehicle striking a light pole at the intersection of Hollywood Way and Magnolia Blvd. 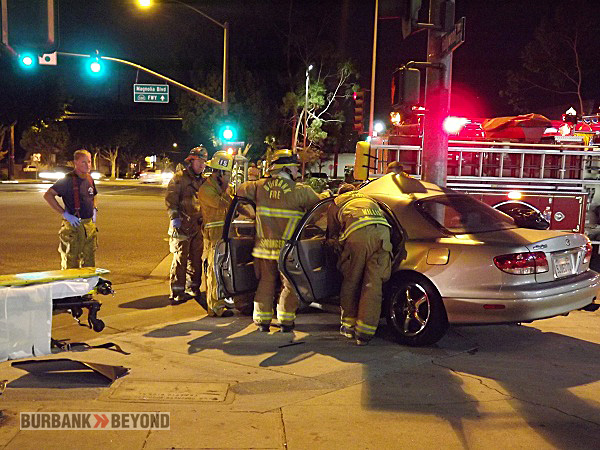 Burbank Firefighters work to free a woman after the car she was driving was involved in an accident, sending it into a pole at the corner of Magnolia and Hollywood Way (Photo By Nick Colbert)

Burbank Police were first on scene and reported one car with minor damage in the middle of the intersection, and one car up against a light pole on the northwest corner of the intersection. The vehicle that struck the pole, a beige sedan, was reported to have gone through the intersection heading westbound on Magnolia just as the light turned red, clipping the car that was turning north onto Hollywood Way off of Magnolia.  The sedan was then flung sideways and smashed into the pole on the passenger side.

The driver of the sedan had her dog on her lap during the accident but the dog was unharmed. The woman however suffered multiple injuries but refused transport by paramedics to the hospital. The driver of the other vehicle was the only occupant and was unharmed.
Multiple lanes around the intersection were blocked by the emergency crews, and westbound traffic on Magnolia was blocked at the intersection for close to an hour for the duration of the investigation and the clean-up.

Former Burbank Deputy Police Chief William Taylor won his unlawful termination lawsuit against the City of Burbank and was awarded $1.29 million by a jury.

After learning of the verdict, the City responded with the following statement:

After a lengthy trial, a superior court jury returned a verdict against the City of Burbank in a workplace retaliation lawsuit filed by former Deputy Police Chief William “Bill” Taylor.

From the beginning, the City believed that its actions were justified and in the best interests of the Department and City. Accordingly, the City vigorously defended this case and is disappointed with the decision.

Burbank’s City Attorney, Amy Albano, responded to the decision by stating, “Although the City is obviously disappointed with the decision, we are confident in our position and will be looking at all appropriate options about how to move forward as a result of this decision.”

The City would like to acknowledge the hard work of its legal defense team, in particular attorneys Ron Frank and Linda Savitt.

Looking toward the future, Burbank’s Mayor, Jess Talamantes, stated, “In consultation with the City’s legal team, we will continue to work for the best interest of the community. Ultimately, the City would like to successfully resolve cases like this and move forward in continuing its mission to ensure the public safety and welfare of our citizens.”

This is the first of the lawsuits to be heard filed by officers against the City of Burbank during a time in which a robbery investigation at Porto’s led to allegations of abuse of suspects in the case and then a burglary inside the police department itself was allegedly swept under the table.

Approximately 10 officers have been fired for different reasons after the incident and Taylor’s case is the first to come to a jury.  The City of Burbank has already spent millions of dollars on legal representation and investigations and have yet to release any of their findings to citizens.

A FBI and Sheriffs investigation into the department have also not either been finalized or is so, the report has not been presented to the public.

The amount of lawsuits could increase as members of the police department who were fired two years ago are still awaiting their arbitration hearing that is mandated by the City.  Because there is no provision in the Burbank Police Officers Association contract with the City on how soon after termination a hearing is required, the City has continued to stall on the hearings, leaving the former officers status uncertain.

The Burbank Chamber of Commerce reports that in light of the recent Earthquake and Tsunami/Nuclear Crisis in Japan, Porto’s Bakery & Cafe is once again gearing up to help those affected by these tragic events. April 11 to 14, Porto’s will donate 20% of all sales of regular size cheese roles directly to the Red Cross for Japan relief.