After receiving more than 20 applications and conducting a rigorous selection and interview process, Superintendent Jan Britz and the Board of Education announced the appointment of Michael Bertram to the position of principal of Burbank High School. Mr. Bertram formally accepted the position at last night’s Board Meeting. Mr. Bertram has been a professional educator since 1988. He received his B.A. at California State University, Northridge, in 1991 and his M.A. and administrative credential at Point Loma Nazarene University in 1998. Mr. Bertram is currently enrolled in the Educational Doctorate Program at the University of Southern California.

Mr. Bertram has grown into a proven leader who can make positive change happen. His many years of administrative service in a variety of roles prove that he can succeed in any assignment with any group or team. He possesses the strong character traits which match those identified by parents and staff members for the principalship at Burbank High School. His experience and knowledge of the culture, history, and community will further assist him in achieving continued success at Burbank High School. Please extend a warm welcome to Mr. Bertram when he takes up his new role with the District on July 1.

Principals at Thomas Jefferson and Walt Disney Elementary Schools announced that at the end of the current school year, they will be trading places.

As of June, 2013, Sandra DeBarros, who has been the principal at Disney Elementary School for six years will become Jefferson’s principal. Likewise, Melissa Kistler, principal at Jefferson Elementary School for the past four and a half years, will become Disney’s principal. According to Dr. Tom Kissinger, Director of Elementary Education, this is a positive change, and one that allows the District and school communities to take advantage of the strengths and skills of two talented principals who have already been successful in the District, but have expressed an openness to change.

When Dr. Kissinger approached the two principals about this idea, both welcomed it and have communicated a genuine willingness to work in school communities with different challenges and opportunities. “Melissa (Kistler) and Sandra (DeBarros) are both highly skilled and very talented individuals,” said Kissinger. “The Superintendent and I have every expectation that they will continue to be successful at their new schools.” Kissinger also pointed out that the principals who are moving will have the added support of their curriculum specialists, who will be making the change with them.

Before coming to Burbank, Ms. DeBarros taught Kindergarten and 3rd grade in the Mountain View District in El Monte. She began her career in Burbank as a teacher in 1995. In 2002, Ms. DeBarros was selected as the District’s Teacher of the Year. Ms. DeBarros, who has a Master’s Degree from UCLA, has been the principal at Disney since 2007.

Ms. Kistler began her teaching career in the Covina Valley Unified School District in 1993. She served as an assistant principal in Temple City and has been the principal at Jefferson since January of 2009. Ms. Kistler earned her Master’s Degree at USC and is currently enrolled in USC’s doctoral program in Educational Leadership. 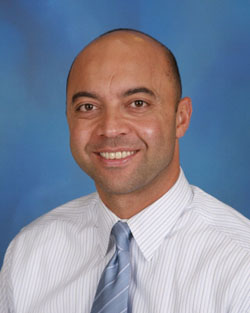 Youssef has been a professional educator since 1994. He received his B.A. at California State University, Northridge, in 1995, and his M.S. and administrative credential at Mount St. Mary’s College in 2000. For six years, Hani taught English at both the high school and middle school levels before serving as an administrator. He has acquired experience as an administrator in three different districts: Los Angeles Unified, Conejo Unified, and Burbank Unified school districts. He has been serving BUSD students since 2003.

Youssef has grown into a proven leader who can make positive changes happen. He possesses strong character traits and leadership abilities. His experience and knowledge of the district and community will aid him as he creates future successes at BUSD.

Youssef will begin his new role on July 1. As part of the recruitment process to hire a new principal, Dr. Britz will meet with staff and parents at Burbank High School. The staff meeting will be held April 10 at 3.15pm in the BHS Cafeteria. The parent meeting will be scheduled shortly.

The district has not announced a timeline in selecting a new Principal at Burbank High School.

Burbank High Principal Bruce Osgood announced to staff at an afternoon meeting that he was stepping down as Principal effective at the end of the year to accept an Administrative staff position at Village Christian School in Sun Valley.