It was her mother’s wish that when she died, family and friends would gather and celebrate her life with a good old Texas barbecue.  And so on Saturday, September 7, Mary Hector’s daughter, Mary Whitney, is doing just that.

Mary Hector was born on the family farm near Sherman, Texas in 1916. The farm was near Denison, Texas, and the family had a winter home there just a couple of doors down from a family from Kansas named Eisenhower.  Mary’s mother would tell her how she held the Eisnehower’s son, Dwight David , on her lap when he was just a baby.

Mary was the youngest of seven children in the Steele family. Like many people from her generation, growing up in the “Great Depression,” Mary came to California in 1938.  One of her brothers had already moved to California and found a job as a chauffer for William Wrigley.  He was able to get Mary a job as a maid at the Wrigley Mansion in Pasadena. Eventually her mother and two more brothers came to work for the Wrigleys. She and her mom lived in the maid’s quarters in the mansion’s basement.

In 1940 while working as a waitress in Hollywood, Mary met a young man named Howard Hector, who was a mechanic at a nearby auto repair shop.  In 1941, Howard purchased a house being built on California Street just north of Burbank Blvd.  It was one of the first houses on the street. It would become their family home.  When Howard was drafted into the Army in 1942, the young couple decided to go to Las Vegas and get married before he left to fight in World War II.  They were married for 38 years before Howard’s death.

During the 65 years that Mary Hector lived in Burbank, she raised her three children, watched her grandsons grow up, and enjoyed  the pleasures of being a great-grandparent.  Her grandchildren, and great-grandchildren affectionately called her Mermaw.

When her children were in school, Mary was active in the PTA at Bret Harte Elementary School, Luther Burbank Junior High School, and John Burroughs High School.  She received a Honorary Life Membership from the Bret Harte PTA for her outstanding service.

She was a member of the Little White Chapel Christian Church, Disciples of Christ, for 70 years.  She was involved with the Christian Women’s Fellowship at the church, and hosted their annual rummage sales in her backyard.  A tireless worker, she was always there when the work needed to be done, and rarely stayed to take credit.   She worked into her 80’s at the Burbank Board of Realtors, where she served coffee and doughnuts at their weekly meetings.

Mary was very close to her brothers and sisters, and her nieces and nephews.  She loved to have big family reunions.  She and her husband enjoyed going on trips, first in their trailer, and later in their motor home.

Mary died on July 27, at age 97, in a nursing home in San Gabriel where she spent the last six years of her life.  She is survived by her daughters, Mary Whitney of Burbank, and Joyce Cole and her husband Curtis of Fresno.  She is also survived by her grandsons, Howard Whitney and his wife Kelly; Kevin Whitney, and Chris Whitney and his wife Jill; and four great-grandchildren.   She was preceded in death by her husband, her son Howard Mase Hector, and son-in-law Kent Whitney.

The celebration of Mary Hector’s life will be held at 4 p.m. Saturday, September 7, at the home of her daughter, Mary Whitney, at 1027 N. Lamer St., Burbank  All who knew Mary are invited to attend.  Per her request, the song “The Yellow Rose of Texas” will be sung at the celebration.  In addition, her daughter is decorating her home with yellow roses.  A big yellow rose wreath now adorns the front door. 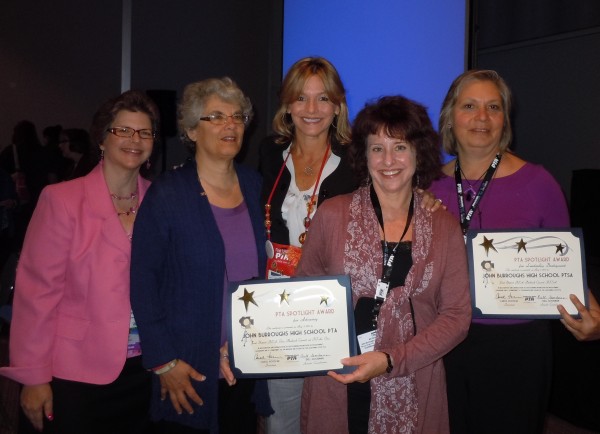 There were only 8 awards given across the state and John Burroughs High School received two of the prestigious awards.

Some of the hardest working people in the community, who volunteer their time, talents, and resources for the benefit of children, were honored when the Burbank Council Parent Teacher Association (PTA) held its 63rd Annual Honorary Service Awards dinner. 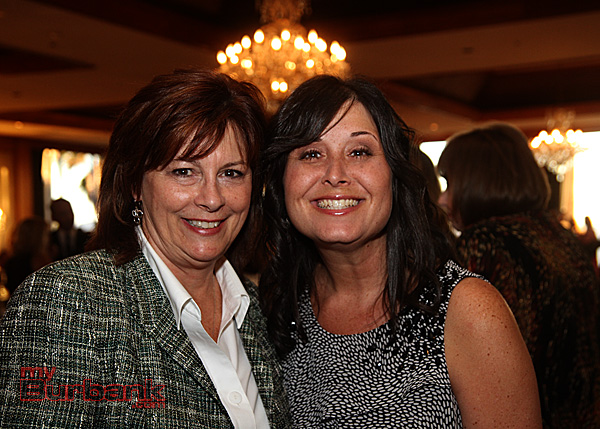 Honorees were selected by the Burbank Council PTA and of the 16 PTA or PTSA units at each of Burbank’s public schools.   The Council recognized two recipients of Honorary Service Awards, The Burbank Town Center and Kathy Yaeger.  The Burbank Town Center was selected based on their “My School Is Cool Program,” which has contributed in excess of $150,000 to our school over the past five years.   Yaeger, who is the Senior Administrative Secretary for the Burbank Unified School District’s Facilities Services, received the HAS for her work above and beyond her job in helping volunteers  groups in the district.

Continuing Service Awards are given in special recognition of ongoing or longtime service to children and youth.

Trish Vosper, who has been a teacher for 32 year was presented the Golden Oak Service Award by the Emerson Elementary PTA.  It is the most prestigious PTA award, given to an individual or organization that has made significant contributions to the welfare of children in a school or community. She has been at Emerson the past 25 years, and is retiring this year.  She received the award for her priority to put children first. 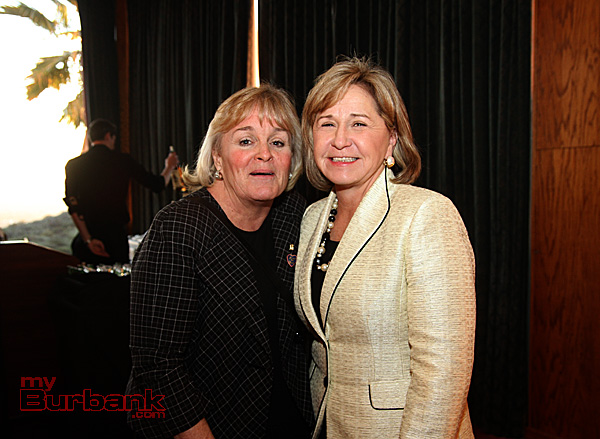 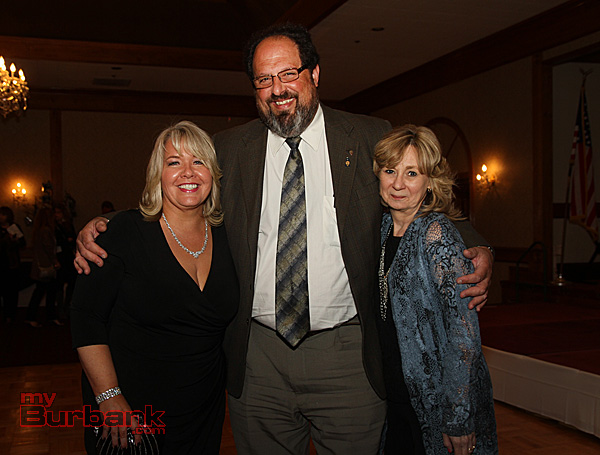 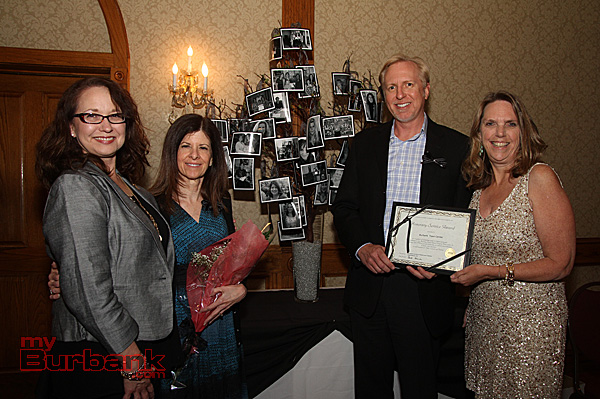 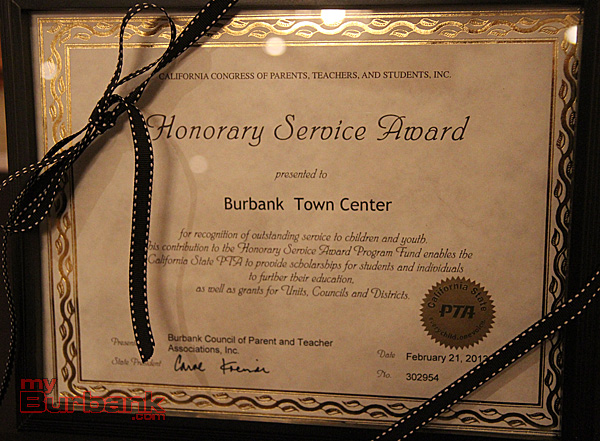 Five years ago the PTA at William McKinley Elementary School created the McKinley Alumni Scholarship both to help a young person who went to McKinley as a young child achieve their dreams of a higher education AND to inspire current McKinley students to aim high in their own educational efforts. This year’s recipient, Karen Moreno, has volunteered countless hours at the 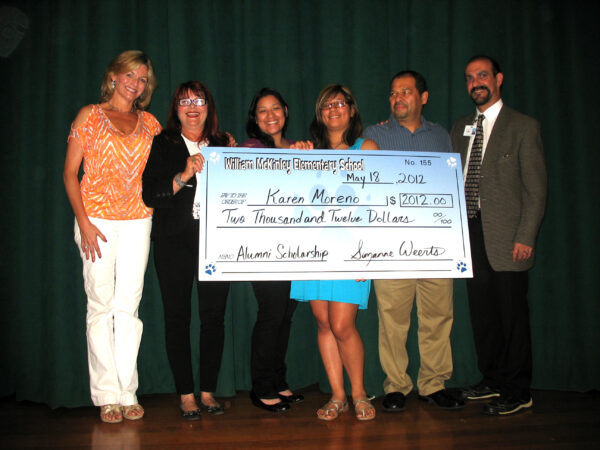 Buena Vista library, excelled in numerous ROP courses at John Burroughs High School, maintained exceptional grades and graduated 25th in her class of 666 students. She credits her parents Juan Antonio and Hortencia Moreno with inspiring her to always do her best and leading her to believe that college wasn’t just an option – it was a certainty for her future.

On Friday, May 18th, Karen read her application essay to the staff and students of McKinley Elementary. Also in attendance were BUSD Director of Elementary Education, Dr. Tom Kissinger; School Board Member Ted Bunch; and JBHS Principal Emilio Urioste. Three of Karen’s former teachers were also present for the awards ceremony. Shawn Mulloy and Laura Mixon still teach at McKinley and Marie Coyne is now at Providencia Elementary. In her speech, Karen encouraged the “little panthers” in the audience to work hard in school, but to also make plenty of time to play and be kids.

The 2012 McKinley Alumni Scholarship was for $2012. The money was raised partly by the McKinley students during “College Month” in November, when the children collected spare change in a scholarship jar on their library days. Other donations were contributed by Alumni along with a generous donation local Rancho Realtor and McKinley community partner, Jay Geisenheimer of Rodeo Realty.

Students in Carol Derry's second grade class take their turn in the Pumpkin Patch. (Photos By Ross A. Benson)

Nestled in a in an improvised field of straw and hay bales, guarded by several scarecrows and diligent parents, hundreds of pumpkins awaited adoption by eager students on Friday morning at William McKinley Elementary School.

In its 12th year, McKinley’s PTA Pumpkin Patch provides students and parent volunteers a break from the routine, giving children a taste of Halloween and American culture.
“Many of our students have never had a chance to see a real pumpkin patch” remarked event organizer Stephane McCorkle.  At the Pumpkin Patch, all McKinley students had a chance to rummage through the straw, picking out their favorite fruit.  “Everybody gets a pumpkin” confirmed McCorkle, ensuring a great time for all the kids.
As Mr. Danielson’s 4th year class approached, the ‘Patch was transformed into a sea of colors, laughter, giggling, teasing, and a scene of teachers and volunteers connecting with students.  Some explaining to critical children a bit of the history of pumpkins, taking patience describing the abstract of a farm to city kids, others helping youngsters pick out the perfect pumpkin for their prize.

Shannon Douglas, a volunteer at the ‘Patch and mother of a McKinley student praised the efforts of the McKinley PTA and teachers.  “This is the greatest school we have been to” said Douglas, “This is the hardest working PTA I’ve ever seen, and I am very impressed with the level of participation and positive attitudes of everybody in the school system.”

Volunteers started building the Pumpkin patch at 6 in the morning, all excited to bring this slice of happiness to McKinley students – although it was a bit difficult to determine who was having the best time, as parents and volunteers shared and traded laughter equally with the students.
As all the children showed off their trophies, teachers ensured no student, even those who were absent, lacked a pumpkin.  Then, as each student signed a large “Thank You” card for the PTA, volunteers prepared the ‘Patch for the next class of children cheerfully anticipating their time on the McKinley farm.