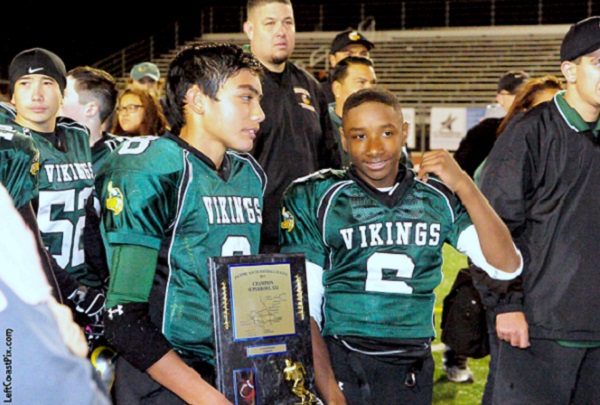 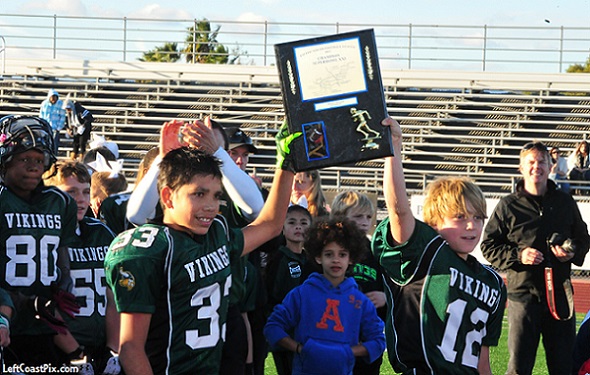 An unprecedented two-year run of excellence continued for the Burbank Vikings Junior Green, which added the Camarillo Roadrunners to the mounting list of teams having fallen after a 14-8 victory in the Pacific Youth Football League East Conference Super Bowl on Saturday.

The Vikings (12-0) now own a 26-game winning streak and became the only Burbank squad to claim back-to-back titles, but it came with quarterback Bryce Young’s injury in the first quarter.

Burbank’s game-winning drive was dramatic and covered the length of the field as wide receiver Isaac Cordova, who stepped in for Young, capped the trek by finding wide receiver Sebastian Leal (22 yards on two receptions) with a 13-yard pass in the final quarter for a six-point lead.

After a scoreless opening quarter, the Vikings made productive use of an inside and outside running attack that led to the game’s first points.

Tailback Dante Coxsom (46 yards on 14 carries) is an outside speed demon, while fullback Loyal Terry (59 yards on five rushes and one catch for 11 yards) does his best work inside the tackles. To put it mildly the combination is tough to contain.

The scoring drive was finalized when Leal (nine rushes for 36 yards) took a handoff from Cordova (five of eight pass attempts for 85 yards) and scooted into the end zone from seven yards out that made it 6-0. Cordova (64 yards on 11 carries) kept the ball on the two-point conversion as the Vikings led 8-0.

Burbank had the opening possession of the second half, but fumbled the football at its 12-yard line. Camarillo, which faced the Vikings in Week two and were routed, took advantage of the short field and seven plays later found pay dirt.

The Roadrunners, who managed 60 yards on the ground and 24 yards through the air, were successful on the two-point try and it was deadlocked at 8-8.

The Vikings were paced on the defensive side of the ledger by Jake Moore, Malachi Meeks and Manny Pimentel as each contributed five tackles.

Michael Sorokin also recovered a fumble, Coxsom had an interception and another pick he returned 80 yards at the end of the second quarter that was called back. Leal added an interception, and Trystan Daggs one pass defended on a critical fourth and long that halted a Camarillo drive.

(On a side note, we would like to congratulate Coach Corey Enman on his team’s success. More importantly, we would like to thank Coach Enman for ALL of his game summaries that he sent to us for the ENTIRE season. Many of the head coaches chose not to share information to the public. This is all about the kids and unfortunately we had too many no-shows from the coaches. Corey Enman, however, cared enough to share the positive news with all of you each and every week!)