Burbank YMCA Service Club members take to the grills to cook up the fare at annual Pancake Breakfast. Funds raised allow kids to participate in programs even if their parents can’t afford it. 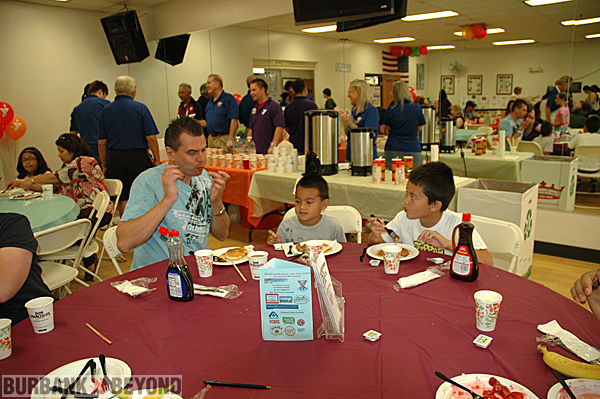 Mikhail Lazarev with his sons, Alec, center, and Nicolai, enjoying breakfast at the Burbank YMCA Service Club's Pancake Breakfast on May 12. (Photo by Joyce Rudolph)

The delicious scent of sizzling sausage pierced the air of the YMCA parking lot. Jeff Prutz, a member of the Burbank YMCA Service Club, was rolling the links across the grill for the annual Pancake Breakfast to raise funds for youth programs on May 12.

His reason for giving back to the community put a lump in the throat.  A member of the Marine Corps Reserves, Prutz is waiting to be deployed to Afghanistan, he said.

“In case I don’t come back, I want people to have a good image of me,” he said.

He also gives time to Boy Scout Troop 209 in Burbank and Toys for Tots in Kern County. 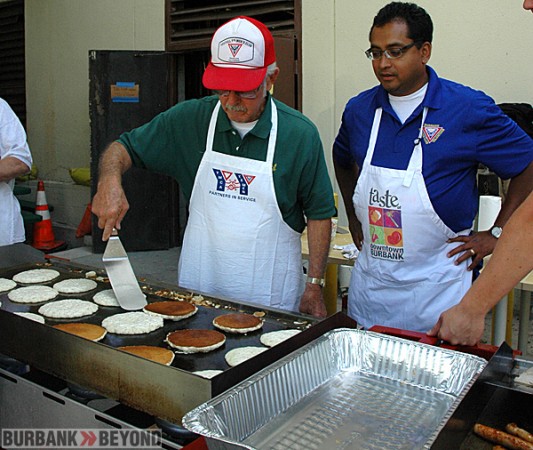 Next to him Art Wetton, was flipping the golden disks. Arnie Lee was taking note of his technique. Co-Chairmen and husband and wife, Kamyar and Melanie Kalantari, were overseeing the operation.

The couple joined the group after shopping for a Christmas tree two years ago and finding out the funds raised by the pancake breakfast and tree lot go to youth programs, Kamyar Kalantari said.

Inside the all-purpose room, families were poking at links and pancakes doused with strawberries or maple syrup.

Mikhail Lazarev stopped to fuel up his boys, Alec and Nicolai, for swim practice at the YMCA, their father said.

Bernie and Dorothy Katz came from Newhall for the breakfast. Dorothy was sitting with friends from the YMCA Arthritis Exercise class on Mondays, Wednesdays and Fridays, she said. They include Julie Kenyon, Brenda Ballesteros and Yvette Hampton and their instructor Shari Brandon. 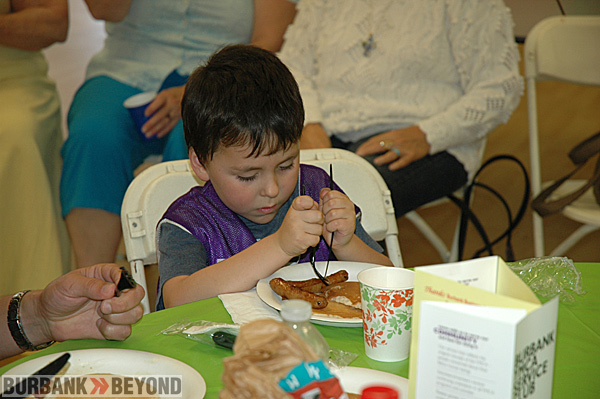 “It’s my favorite event,” Koll said. “It pulls everyone in from the community. We see small kids to seniors and everything in between ~ people from the entertainment industry and small businesses. And it is a fundraiser that helps kids from families who can’t afford the programs.”