Two Los Angeles men were arrested for burglary Wednesday afternoon after police stopped their vehicle on Frederic St., south of Magnolia Boulevard and saw women’s purses and two rifles in the back seat, according to Sgt. Darin Ryburn of the Burbank Police Department. 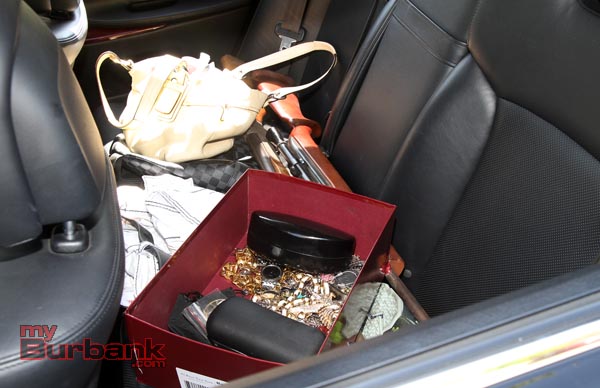 The occupants of the black Lexus, Marc Smith, age 21, and Terry Jones, age 24, were arrested for burglary after victims from a nearby residence on the 400 block of N. Catalina St. identified the property in the back seat as items stolen from their home earlier Wednesday, May 28.

“Based on information from previous residential burglaries in the area, we are investigating these suspects’ possible involvement in the recent string of daytime burglaries in the western part of Burbank,” said Ryburn. “Additional charges could be filed.” 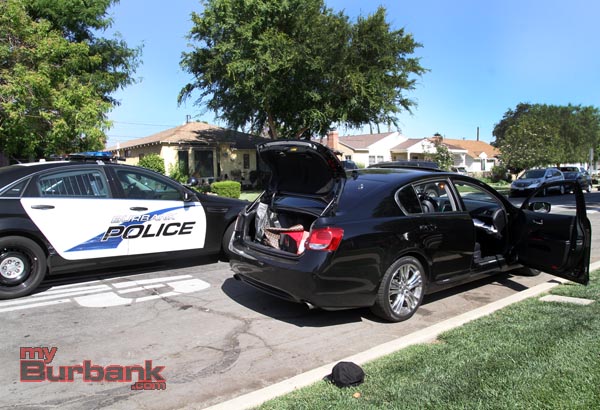 At 1:50 p.m. Wednesday, officers responded to the 400 block of N. Catalina for a residential burglary. The victim had been away from her home between 12:30 p.m. and 1:50 p.m. Upon her return, she saw the side door open and the house had been ransacked.

A checkbook, multiple pieces of jewelry and other items were reported stolen. The victim may have left the side door unlocked, through which thieves gained entry.

Officers, detectives and investigators descended upon the area, added Ryburn, to investigate the burglary scene and canvass the area. Police were looking for the suspect vehicle, a black Lexus with paper plates. 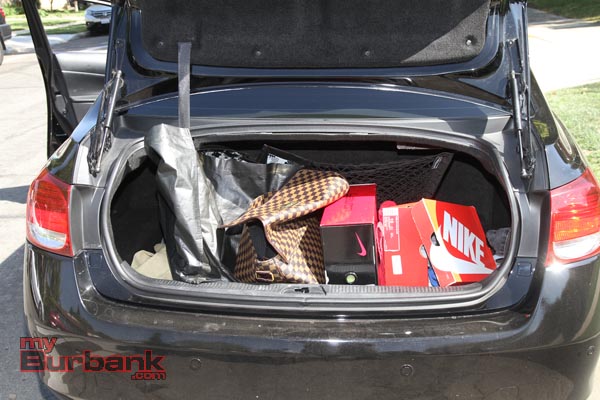 Police were also looking for a male Black suspect, who was seen during one of several residential burglaries reported on Monday, May 19, continued Ryburn.

Additionally, a burglary suspect entered a home on the 600 bock of N. Lima on May 19 at 3:15 p.m., but he ran away without taking anything. A 71-year-old woman was at home and heard a knock on the front door and did not answer the door. She then heard the rear sliding door being opened. The woman yelled out and heard the suspect run out of the house, said Ryburn.

Another residential burglary was reported on the 800 block of N. Buena Vista on Tuesday, May 27. 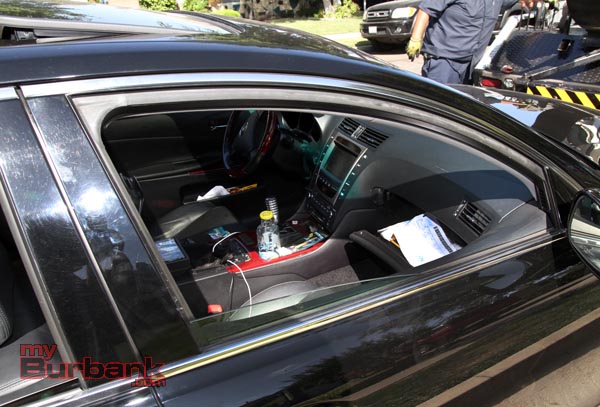 While police were looking for the residential burglary suspects on Wednesday, May 28, officers responded to a home burglary alarm on the 400 block of N. Buena Vista St. at 2:08 p.m., which had been triggered at 2:00 p.m.

The police airship responded to the location ahead of officers and reported an open window on the south side of the house and a window screen lying on the ground, said Ryburn. Officers cleared the house.

Jewelry, belts and diamond earrings were reported stolen from the Buena Vista house and entry was made through an open window. 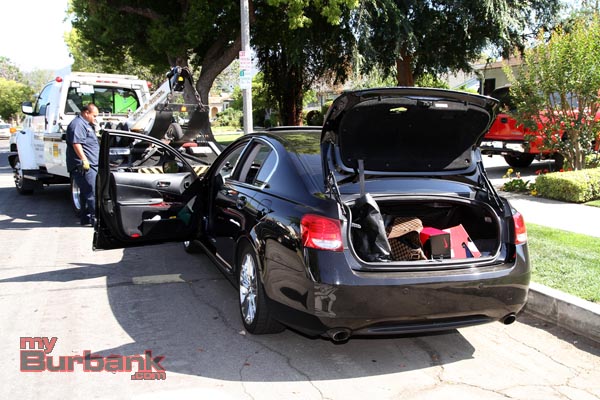 At 3:10 p.m. Wednesday, officers noticed and pulled over the vehicle matching the suspect vehicle description, with Smith and Jones inside, along with the property identified as stolen from the Niagara St. home.

Smith and Jones are being held on $50,000 bail and are due in court tomorrow.

“We are making every attempt to identify and locate property stolen from residents here in Burbank and return items to their rightful owners,” said Ryburn. 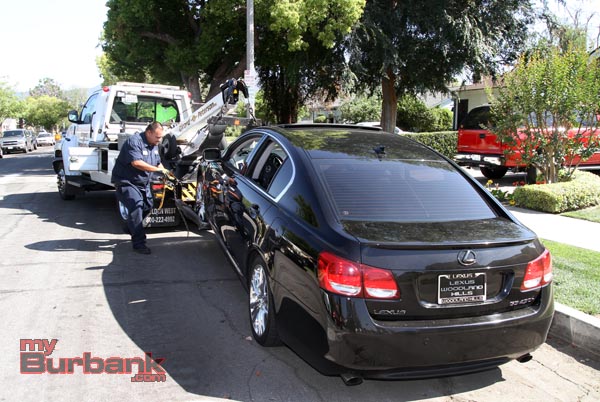 Thieves got away with at least nine items of jewelry including diamond and gold pendants, gold and silver rings and gold bracelets, according to Sgt. Darin Ryburn of the Burbank Police Department. They also took an undisclosed amount of cash.

The victim returned home to a ransacked house and called police. The thieves are believed to have made entry through an unlocked second-floor window.

On March 17 between 9:00 a.m. and 3:00 p.m., unknown suspects broke into a home on the 500 block of S. Sunset Canyon Drive, taking a large computer, a Mac All-in-One computer including a 25″ monitor, an antique watch from the victim’s father, an iPad and a large black leather duffle bag.

When the victims returned home at 3:00 p.m. that day, they noticed the front door was open and a window in the back door had been smashed for entry, according to Sgt. Darin Ryburn of the Burbank Police Department. The victim’s jewelry box had been opened and dumped on the bed and drawers and cabinets were standing open.

The residence had been undergoing renovation and several large items were taken including a bathroom vanity still in the box, a water heater, power tools and a ceiling fan still in the box.

Entry is thought to have been made through an unlocked slider window.

Since the stolen items are large and would require a large truck or delivery van to carry away, Burbank Police ask for anyone in the area who may have seen something suspicious to contact them at 818-238-3210.

Two more residential burglaries were reported at locations in the Burbank Hills recently. In both cases, the unknown suspects made entry through open or unlocked windows during the daytime.

On Tuesday, March 11, between 11:30 a.m. and 2:00 p.m., thieves entered a residence on the 500 block of Orange Grove Avenue through an open bedroom window facing a walkway.

The downstairs, two-bedroom apartment had some drawers left ajar and the only reported loss was under $1000 in U.S. currency in an envelope form the victim’s dresser, said Sgt. Darin Ryburn of the Burbank Police Department.

While there was no pry bar marks on the bedroom window, the window screen could not be located outside the apartment, he added. There are no suspects, video or descriptions of possible vehicles at this time.

Another daytime burglary was reported on the 800 block of S. Sunset Canyon between 8:00 a.m. and 4:30 p.m. on Wednesday, March 12. In this case, unknown suspects cut the screen and entered through an unlocked bedroom window.

When the victim arrived home from work and saw the residence was ransacked, he called police to investigate in case someone was still inside. The Burbank Police airship assisted with the ensuing search of the area and discovered a ladder propped against the house next to the bathroom window, according to Ryburn.

A rifle, several watches and jewelry were reported stolen from the residence. There are no suspects, video or further information about the case at this time.

Two daytime residential burglaries were reported from apartment complexes in the City recently.

Entry is thought to have been made through an unlocked window with a broken latch next to a walkway on the east side of the complex.

Between noon and 4:30 pm. on March 7, prescription medications were taken from a downstairs apartment on the 400 block of E. Tujunga. When the victim returned home, he noticed the interior was ransacked and believed the suspects possibly still inside, so he called police.

Burbank Police searched the apartment but found no suspects. The residence, however, had been gone through and items were moved and strewn about, including jewelry and an iPod, which were not taken. Three prescriptions for Xanax, Vicodin and Oxycontin were reported stolen.

Entry is believed to have been made via an unlocked window by the front door. The window’s screen had been removed.

Two transients were arrested by Burbank Police on charges related to at least 15 residential burglaries in Burbank during the past three weeks. Nicholas Caves, age 25, and his girlfriend and alleged accomplice, Tabitha Gallagher, age 24, were taken into custody on Monday and Tuesday, respectively.

“Burbank residents experienced a recent rash of residential and garage burglaries,” commented Sgt. Darin Ryburn of the Burbank Police Department. “There have been fifteen reports, primarily of theft of power tools, computers, and sound equipment, in just the past three weeks.”

“Through our investigation of these thefts and with the assistance of evidence recovered by our forensic specialists, a suspect was identified,” added Ryburn.

Police obtained an arrest warrant and when Caves went in to the BPD station on Monday, February 17, for another matter, he was arrested on residential burglary charges that afternoon.

Investigators continued to work on the cases and identified another suspect, Gallagher. She was arrested without incident in the area of the 1300 block of N. Beachwood Drive on Tuesday, February 18.

“A large amount of stolen property was recovered from several locations in the city after the arrest of both suspects,” Ryburn said.

Fifteen separate victims have been identified and Burbank police are in the process of notifying the victims and returning the stolen items to their rightful owners. BPD is also working with other area law enforcement agencies to see if some of their unresolved garage and residential burglaries may be connected.

Caves was arraigned yesterday, February 19, in Burbank Superior Court and continues to be held without bail.

Gallagher is being held on a felony warrant for possession of stolen property and residential burglary and is due in court today, February 20. Her bail is set at $26,000.

Computers and jewelry were taken in a daytime residential burglary reported on Monday, February 17, from a home on the 300 block of S. Lincoln Street. Sometime between 12:30 p.m. and 3:30 p.m. that day, unknown suspects smashed a window in a rear door to gain entry to the residence.

Two laptop computers, one desktop and some jewelry, including a pendant and a wedding ring were reported stolen. The cleaning lady had left the premises and locked up around 12:30 p.m. Monday. When the owner returned home at 3:30 p.m., he saw all the drawers were opened and items thrown about the home.

There are no suspects or vehicle information at this time, according to Sgt. Darin Ryburn of the Burbank Police Department.

A digital camera, two camera lenses, an iPad, a Sony Playstation 3 and a 29″ flat screen television were reported stolen in a daytime burglary from a residence on the 1700 block of Scott Road on Wednesday, February 12. Sometime between the hours of 5:45 a.m. and 5:00 p.m., the unknown thieves entered the residence, possibly through an unlocked window, according to Sgt. Darin Ryburn of the Burbank Police Department.

When the resident returned at 5:00 p.m., the victim noticed several items missing and the house had been gone through. There are no suspects or vehicle descriptions at this time, and Burbank Police ask for anyone who may have noticed something unusual in the area during the daytime of February 12 to contact the department at 818-238-3210.

When the victim came home at midnight, he noticed the front door to his residence was damaged and the interior ransacked. The only item determined to be missing was a pillowcase from the master bedroom.

“Often in a residential burglary, a suspect grabs a pillowcase to fill with items,” commented Sgt. Justin Meadows of the Burbank Police Department.

The investigation is ongoing and there are no suspects at this time.

Multiple small items were taken in a residential burglary on the 3300 block of Brace Canyon Drive on Wednesday, January 15. When the resident returned home at 4:20 p.m., after leaving the house at 7:20 a.m. that day, and parked her car in the garage, she noticed the door from the garage to the house was locked, which was unusual, according to Sgt. Darin Ryburn of the Burbank Police Department.

Inside, the house had been thoroughly rummaged, with drawers and closets open and items scattered about. The resident reported the theft of a camcorder, iPod, about $600 to $700 in cash and a black briefcase containing personal documents.

Entry was made through a smashed rear kitchen window. There are no suspects at this time. The Burbank Police Department encourages anyone who may have seen something unusual or out of the ordinary, like a strange vehicle or person, in the area during the day on Wednesday, to contact them at 818-238-3210.