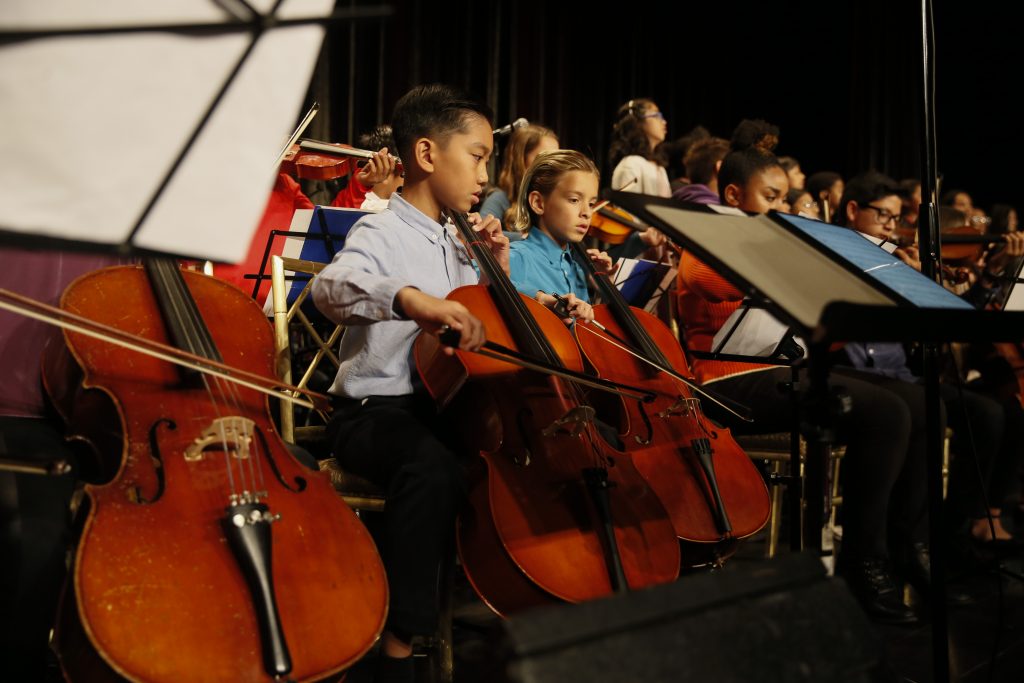 “I would not be who I am if it weren’t for organizations like ETM-LA,” said Ledisi, acknowledging she benefited from in-school music education, as she also thanked Minor for his long-time mentorship. 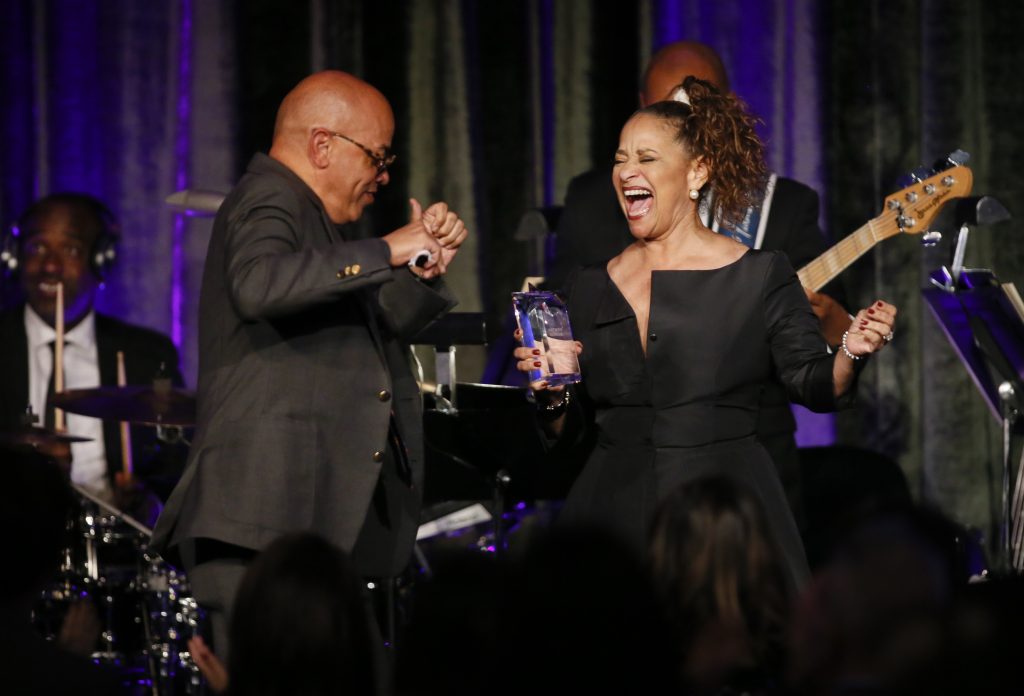 “Music has changed not only my life, but it changes the vibration of this planet,” commented Minor. “Through music, we can make this world a better place.”

“I love what I do… I look forward every day to being inspired by my students,” said honoree Woo, who has taught for over 25 years and is the Director of Instrumental Music and Chair of the Department of Visual and Performing Arts at John Adams Middle School in Santa Monica. 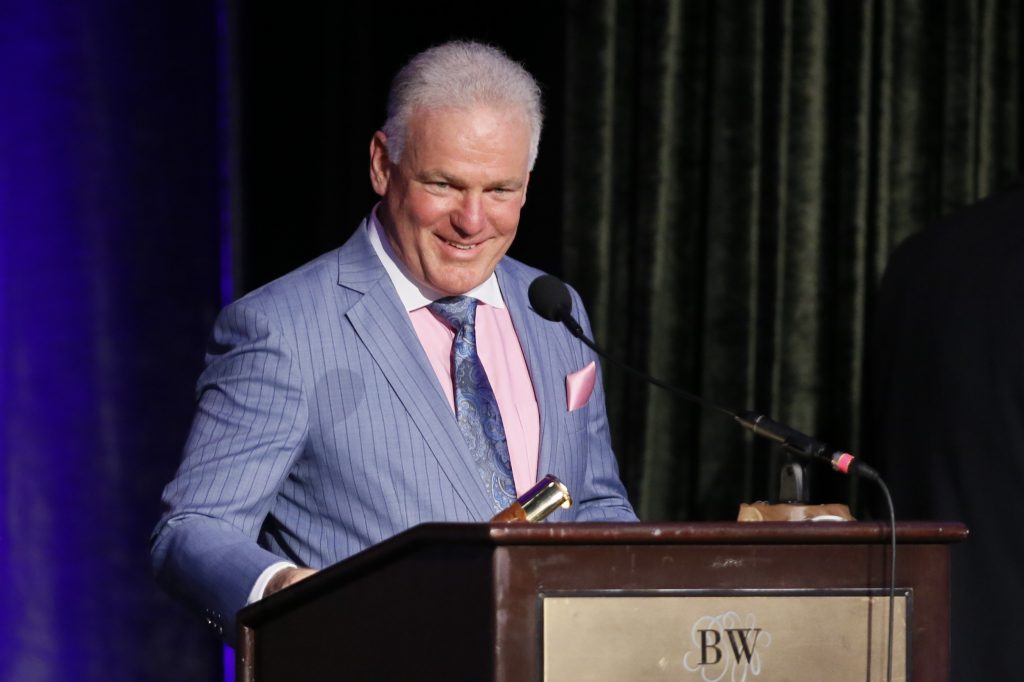 “Education is really important in order for people to have full and successful lives,” stated Michael Cusumano, who received the Shining Star Award on behalf of his company, Cusumano Real Estate Group. “Music is an integral part of the education that our children should receive.”

Lola Debney and Alecia Spendlove served as Co-Chairs of the gala. 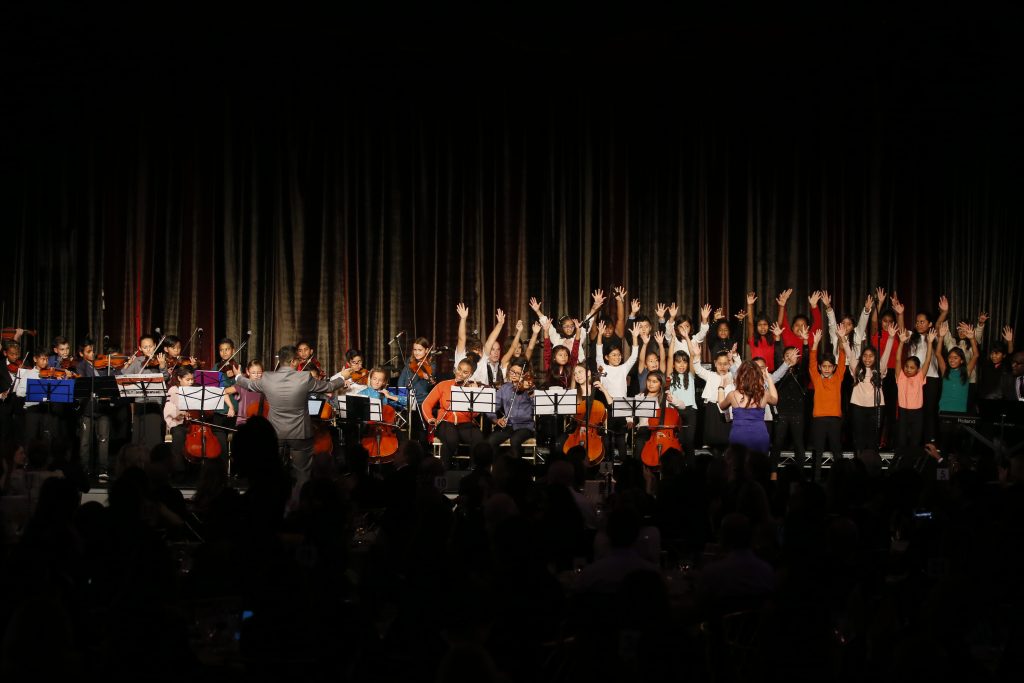 “We are grateful to our amazing honorees – true shining stars – for championing quality music education for all children in local disadvantaged schools,” commented ETM-LA Executive Director Victoria Lanier. “They demonstrate leadership in furthering our mission to ensure all students have an equal opportunity to reach their fullest potential through music and the arts.”

More images from the event can be found on the ETM-LA website here.

On Tuesday evening, December 10, Jordan Middle School choir and music teacher Christine DeMore was presented with the Shining Star award along with Burbank-based composer John Debney by Education Through Music – Los Angeles (ETM-LA.) Actor Ed Helms emceed the event, held at the Skirball Center, and the entire Madrigals choir group from Jordan were part of the featured entertainment along with a number of Grammy-winning musicians. 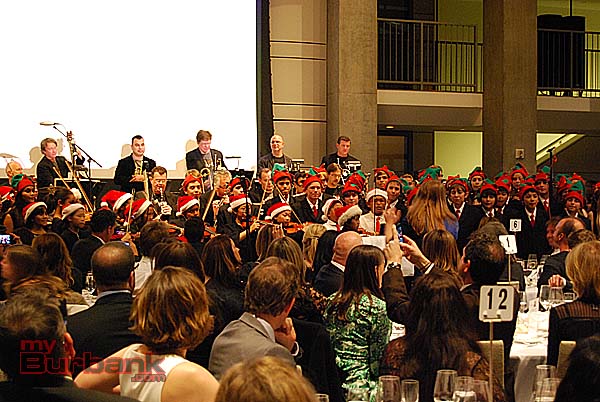 As Vocal Music Director at Jordan Middle for the past 14 years, Christine DeMore oversees five award-winning choirs, comprised of 300 students – a full one-fourth of the school population, focusing on a classical choir program. The choir groups at Jordan, especially the primarily 8th-grade populated Madrigals, are also recognized as one of the top show choirs in Southern California. Many of these students go on to be soloists and members of John Burroughs High School’s nationally recognized choir program. 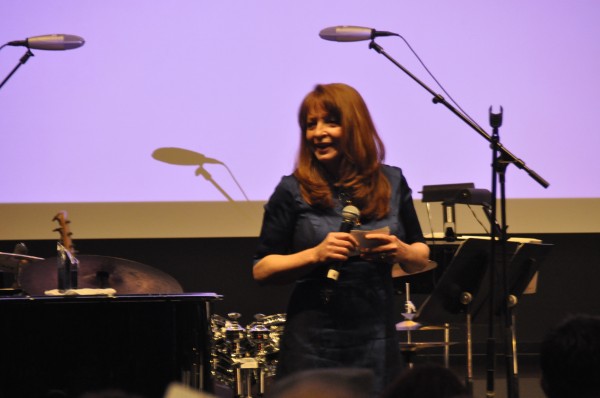 Mrs. DeMore also directs Vocal Ensemble, an auditioned group of 12 voices, known for their a capella work. Every year, as Mrs. DeMore explains the choir program to parents, she emphasizes the college-level vocabulary and music theory she teaches to the children. In addition to vocal music, Mrs. DeMore teaches general music classes as part of the 6th grade elective program.

“I started teaching in college but I didn’t get this fabulous job here at Jordan until later in life. Children have fabulous imaginations at this age and if you can draw on their imagination, they can make incredible sounds,” commented Mrs. DeMore. “It’s more fun to teach and work with children because they sing with imagination.”

“What’s unique about Jordan kids are the sounds they make – their willingness to imagine sound and make that sound,” Mrs. DeMore added. “It’s all about how you design that sound, and they are such willing players.” 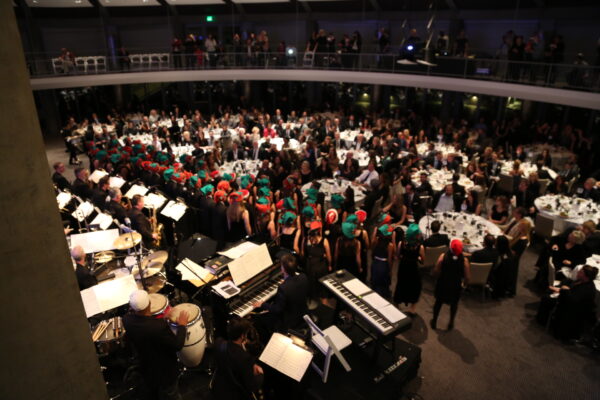 “What interests me is education, even more than music. Any type of music interests me, and in an educational way. I’m always wondering how to find a better way to teach kids: how much can you get from them; how high can the expectation be?” Mrs. DeMore went on to explain. “The more I expect, the more I get. The more music I give them, the more they want. They’re insatiable. So I’m always curious about schools that are low performing – they’re middle schools like us. How come the expectation isn’t that high? How come I’m not seeing that across the board?”

“It has to do with educating and with kids coming out of college – who’s guiding you to take on a group of children and make something special? You have to have a personal drive. That’s what I like about teaching at USC, to see these teachers in the final phase of their master’s degree. I’m telling them: ‘You must set your expectations high. Here’s how to get there, here’s how to do it. But go out and be the best you can be and try to get more from kids.'”

“It’s just the expectations seem so low so much of the time and that’s what’s mind-boggling,” continued Mrs. DeMore. “I think what we do isn’t that special, but there’s never a free moment. There’s always work happening. You’d think kids would reject it and not want to work, but that’s not true. They want more.” 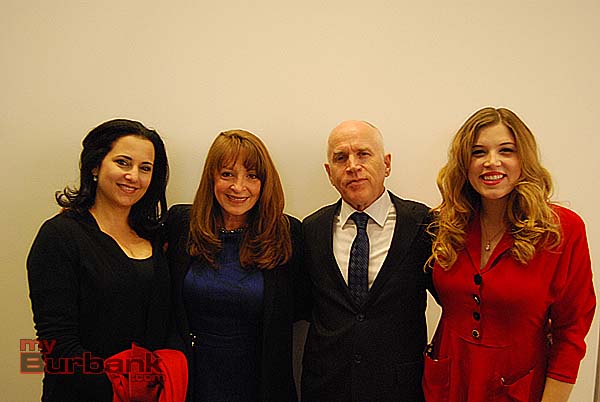 Mrs. DeMore serves on the faculty of the USC Thornton School of Music, Master of Arts in Teaching program, teaching “Choral Conducting in the Classroom” and “Vocal Pedagogy” for choral and instrumental music graduate students. In 2008, Mrs. DeMore was awarded Burbank Teacher of the Year award and the Los Angeles County Teacher of the Year award. She and her husband David have two children and three grandchildren.

“Typically we honor those individuals that may fly under the radar and are very well-respected in their field. After Christine DeMore was nominated, I went to see her teach and I was blown away,” commented Victoria Lanier, ETM-LA Executive Director. 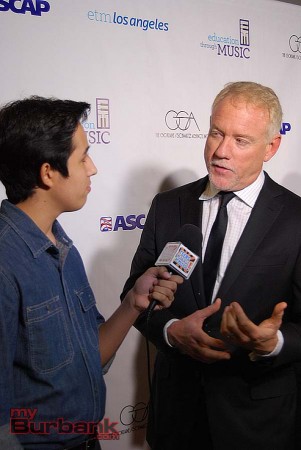 Composer John Debney speaks with a teen reporter on the red carpet. (Photo By Lisa Paredes)

Award-winning composer John Debney was honored as well that evening with the Shining Star. Mr. Debney’s score for The Passion of the Christ was nominated for an Academy Award and he has scored box-office hits including Elf, Bruce Almighty, The Princess Diaries 1 & 2 and Iron Man 2. Mr. Debney recently scored The Call with Halle Berry and Abigail Breslin and Jobs, starring Ashton Kutcher. Currently, he is working on Draft Day with Kevin Costner, SpongeBob Square Pants 2, and the TV mini-series Bonnie & Clyde.

Mr. Debney was born in Burbank and grew up in nearby Glendale. His studios are located in Burbank and he has performed at Providencia Elementary as part of the ETM-LA enrichment music classes. He, his wife and children also reside in the area. In his acceptance speech, he spoke of the challenges a musician and composer faces, including rejection, and lauded perseverance.

“Receiving this wonderful honor has touched a special place in my heart. Being able to give back to children by helping foster music education in our schools is of paramount importance,” commented Mr. Debney, after the event. “Music can enrich a child’s life in so many ways. It helps develop the mind and the heart. It is an outlet and a unifying force for good between all people. That is why my wife Lola and I felt that this organization was one we wanted to be a part of. Education Through Music LA helps so many kids, and we are honored to be a small part of this amazing organization.” 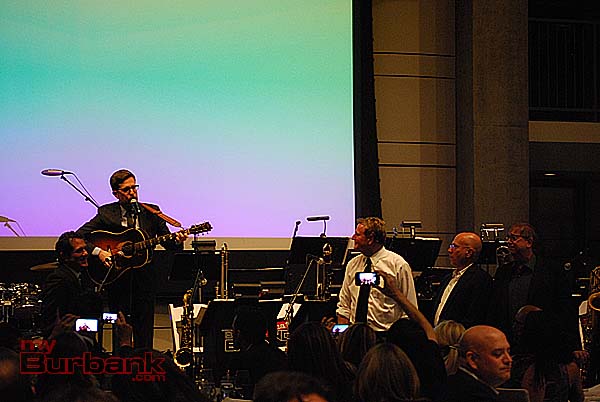 Mr. Helms entertained the guests throughout evening with song, comedy and some auctioneering. A group of four music industry executives bid $10,000 each for four signed banjos and a song made up on the spot and serenaded to them by Mr. Helms. Monica Mancini performed her father Henry’s classic “Moon River” with Gordon Goodwin’s Big Phat Band. Lisbeth Scott performed music from The Passion of the Christ with Chris Bleth, Steve Erdody and Mike Watts to a hushed audience.

ETM-LA’s Shining Star Award is bestowed upon one educator and one composer at the Annual Benefit Gala. The annual fete brings together some of the largest names and personalities in the music and performing arts arenas, and serves as a fundraiser to support ETM-LA’s ongoing partnerships and programs at certain LAUSD and BUSD schools.

“It’s is an amazing team of supporters and is making a real difference in children’s lives,” stated Ms. Lanier. “We are committed to honoring these composers and educators who do so much to further musical education for children.” 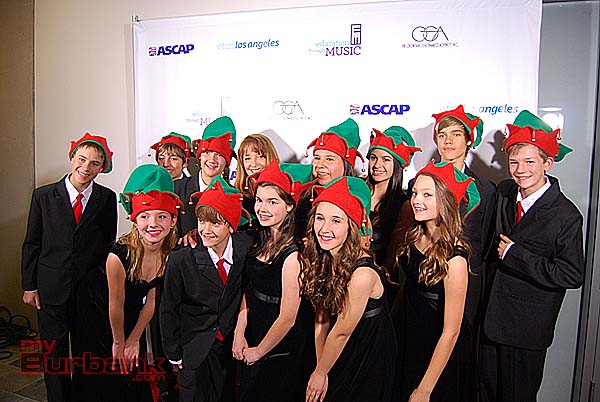 Christine DeMore poses with some of the members of the Jordan Midd;e School Madridals on the red carpet at ETMLA’s annual benefit gala at the Skirball Center. (Photo By Lisa Paredes.)

Last Tuesday’s event raised more than $200,000 for ETM-LA’s programs, via online and in person auctions and personal and corporate donations. The nonprofit will hopefully reach their goal of $250,000 once all the donations are tallied.

Education Through Music started more than 20 years ago in New York City as a nonprofit organization dedicated to provided music teachers and instruments in public schools. Now in it’s eighth year in Los Angeles, ETM-LA has partnered with several schools in LAUSD in addition to BUSD’s Providencia Elementary and Washington Elementary, at which they provide weekly music teachers and present special guest artists, including Mr. Debney and Mr. Helms.

Christine DeMore conducts the Madrigals performance of John Debney’s theme from “Elf” at the Skirball Center. (Photo By Lisa Paredes)

Victoria Lanier speaks at the gala. (Photo By Lisa Paredes)

Music exec Rickey Minor is interviewed by a teen reporter on the red carpet. (Photo By Lisa Paredes)

Lisbeth Scott performing music from “The Passion of the Christ.” (Photo By Lisa Paredes)

Ed Helms stirs up the bidding at the fundraising auction. (Photo By Lisa Paredes)

Ed Helms warms up the party. (Photo By Lisa Paredes)

Christine Demore poses with some of the members of the Jordan Midd;e School Madridals on the red carpet at ETMLA’s annual benefit gala at the Skirball Center. (Photo By Lisa Paredes.)

Composer John Debney speaks with a teen reporter on the red carpet. (Photo By Lisa Paredes)

Two guitars signed by Jewel and Jason Mraz at the auction. (Photo By Lisa Paredes)