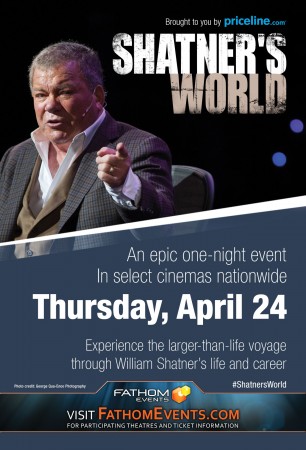 Fathom Events and Priceline.com’s present SHATNER’S WORLD. This is an entertaining, all-encompassing show for any audience. The show takes audiences on a voyage through William Shatner’s life and career, from Shakespearean stage actor to internationally-known cultural icon. He is known far and wide for his unique persona as well as his expansive body of work on television, in film, in commercials and for recording with such artists as Brad Paisley and Ben Folds.

William Shatner is far more than just Captain Kirk. In addition to his acting, he is also a director, producer, writer, recording artist, philanthropist and outside of the entertainment business, a horseman. As noted by the New York Times, “This is not a show designed for a Trekkie convention.”

The show, which has been touring over the last few years to sold-out audiences and continues to tour today, has received great acclaim from press all over the country. This is a show that combines storytelling, comedy and touching real life stories that will keep any audience enthralled for almost two hours

If you would like to win 2 tickets to the Burbank screening on April 24 at 7:30, just send an email to shatnersworld@myburbank.com.  Five lucky winners will be chosen at random!