Twelve students from Burbank’s sister city Incheon, South Korea, are visiting Burbank and southern California as part of an ongoing student exchange program between the two cities. The students, whose trip runs from July 22 through August 4, toured places of interest in Burbank on Wednesday, July 23.

The students, along with their chaperone, saw City Hall and met Mayor Dr. David Gordon and visited the Police and Fire building. They also had lunch and shopped at the Burbank Town Center. 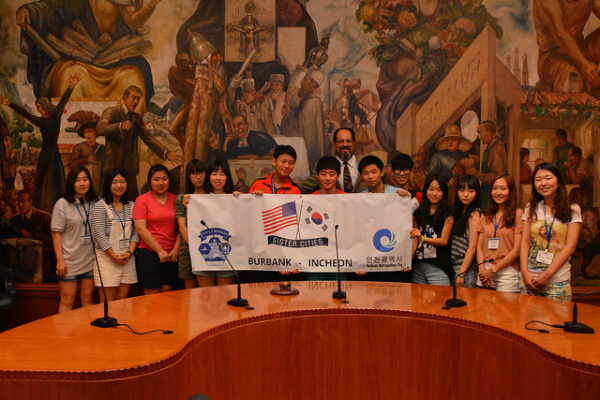 Students also visited Cartoon Network Studios and learned about the Shorts Program from Supervising Producer Mike Roth and how the studio takes pitches, the process of making a show and the large number of people needed to produce a cartoon from Producer Nate Funaro.

“They were surprised to hear how long it takes to complete a show,” said Zita LeFebvre, Director of Operations and Community Relations at the studio. “They had a sneak preview of a new short, The Royals, that has not aired yet. They all loved the show and can’t wait to see it on Cartoon Network.” 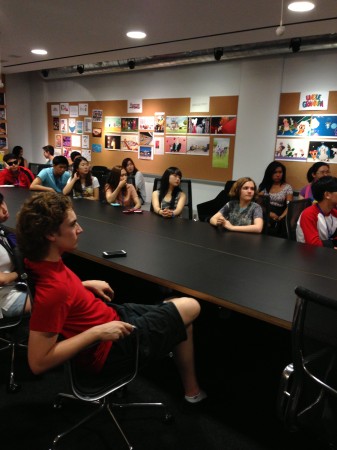 Roth also told the students about a Public Service Announcement (PSA) he is working on with the local Boys and Girls Club of Burbank. They watched a short film,You Are Special, written and storyboarded by Jordan Middle School student Sherryn Sims, that was animated by the studio.

Andres Salaff, Supervising Director on Adventure Time, spoke to the kids about their favorite characters on the show, said LeFebvre, who also told the exchange students about the Young Writers Program Cartoon Network has with Burbank schools.

“They said the kids in Burbank were so lucky!” added LeFebvre.

“While here, they are staying with local Burbank families and participating in a variety of activities where they get to learn more about Burbank and surrounding areas, American culture and lifestyles, as well as some local history,” commented Sharon Cohen, Library Services Director at the Burbank Public Library.

Future trips include visits to JPL, the San Fernando Mission, downtown Los Angeles and Disneyland. The visit is coordinated by the Burbank Sister City Committee.

The Burbank students who visited Japan reported “a fabulous time during their stay in Ota,” added Cohen. “Like the Korean students visiting here, our students stayed with host families while in Ota, visiting local attractions.”

The Committee, a nonprofit organization, is partially funded by the City of Burbank and through fundraising efforts. More information on the Committee is available at www.BurbankSisterCity.org.

The Committee will begin accepting applications in September from Burbank students who are in grades 9-12 for the Summer 2015 student exchange trip to Incheon. Applications will be available on the website.

Buena Vista Library auditorium was a hub of excitement on Tuesday afternoon. 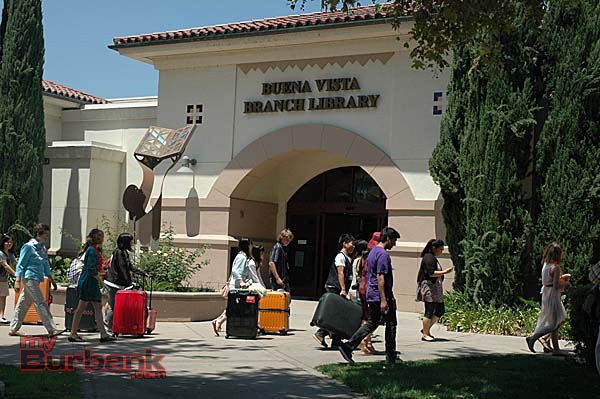 Students from Ota, Japan, arrive Tuesday at Buena Vista Library for a welcome reception given by the Burbank Sister City Committee (Photo By Joyce Rudolph)

A bus had just dropped off 12 students and two chaperones visiting from Ota, Japan as part of the Sister City student exchange program.

Doug Grimshaw, president of the Burbank Sister City Committee, greeted the guests and told them they would be spending the next two weeks meeting people from diverse cultures, touring TV and film studios, learning about the history of Burbank and Southern California and seeing a Dodger game and Disneyland.

“Many people here in Burbank, especially your host families, are happy that you are here and are very excited to meet you,” he said. 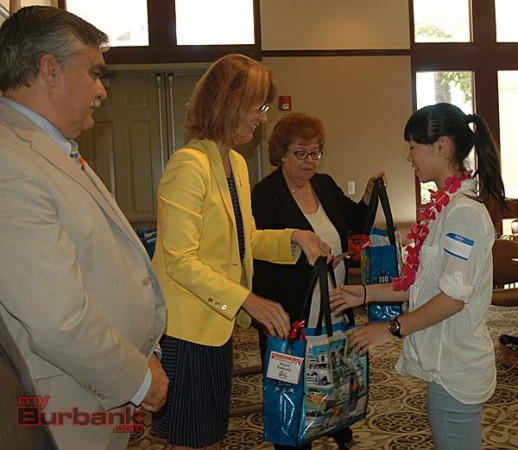 The delegation was welcomed by Mayor Emily Gabel-Luddy, who had written half of her speech in Japanese to make the guests feel at home.

The mayor thanked the pioneers who started the friendship with Ota more than 30 years ago, and the members who have kept the program going, especially the host families that have opened their homes to the guests.

“Each month members of the Sister City program come together in a genuine effort to learn from one another and build bridges of peace for future generations,” she said.

The mayor was joined by council members Jess Talamantes and Bob Frutos in presenting centennial souvenir tote bags filled with mementos including I Love Burbank lapel buttons. So charmed by the button, guest student Yuka Saito held it up in front of one eye when a photographer snapped her picture. 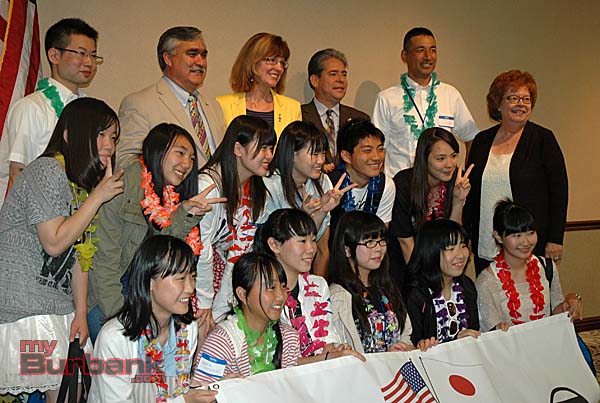 Sharon Cohen, library services director and committee liaison, invited the contingent to see a photograph of Burbank taken in 1932.

“It will give you a good idea of what Burbank looked like before all the tall buildings were constructed,” she said, 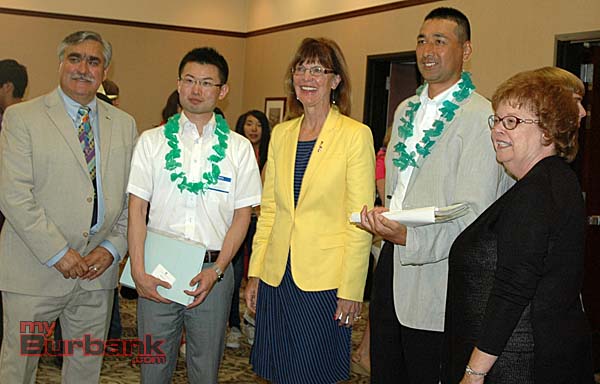 Each guest introduced themselves in English to the audience and told what they wanted to accomplish during their visit to Burbank.

One young girl said she wanted to make friends and learn “teenage English.”

The Burbank Sister City Committee has resumed its connection with another sister city this summer. A Burbank delegation just returned on July 18 after four weeks of visiting the sister city of Gaborone, Botswana. Dena Zelig, chairwoman of the Gaborone Sister City, was joined by Grimshaw and six other adults on the trip. Zelig and Grimshaw are teachers at Burbank High School. Over the last six years, students at Burbank High and Burroughs have been donating funds to a campaign to fight malaria. 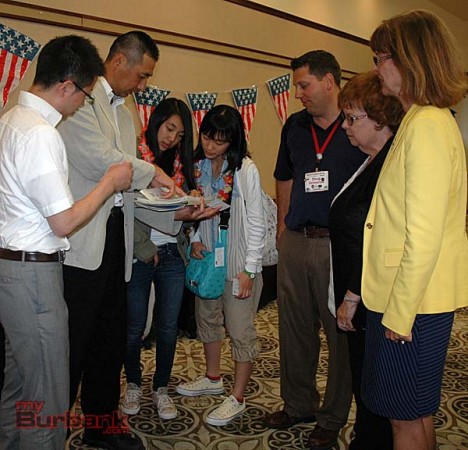 The main reason for going was to present funds the group had raised to Gaborone officials leading an effort to purchase mosquito nets to help prevent malaria in the village of Molalatau. The delegation also brought $400 worth of toys donated by Burbank High School students. They also met with officials to spread the word about regenerating the Sister City program, Zelig said.

The Burbank group also took a workshop in Gaborone to learn about malaria, how it is transmitted, its effects and prevention, Grimshaw said.

Out of the six adults who went, five had actually participated as high school students in Ota, Japan trips with the Burbank Sister City exchange program in previous years, Zelig said.

“So they are longtime Sister city members and their families have been involved for years as well, so it was like a little family,” she added. 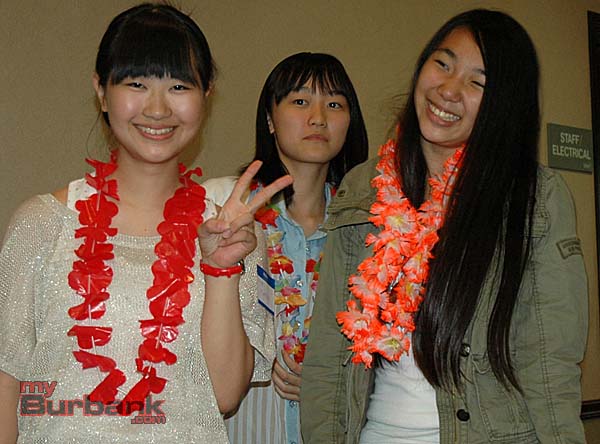 Three of the students from Ota are, from left, Mari Murata, Miu
Horikoshi and Aya Kimoto (Photo By Joyce Rudolph) 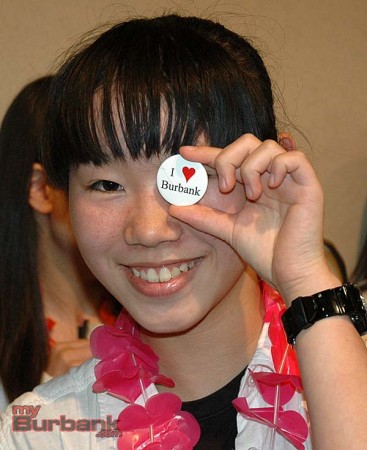 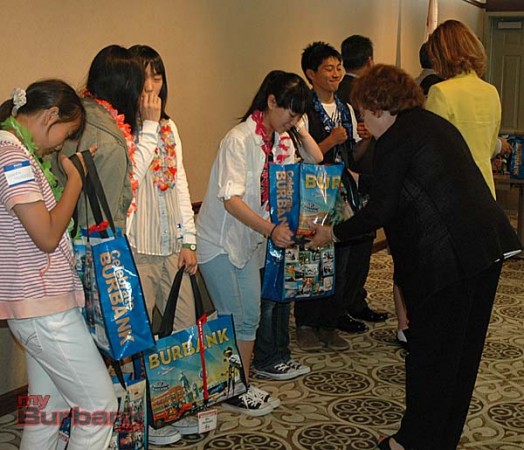 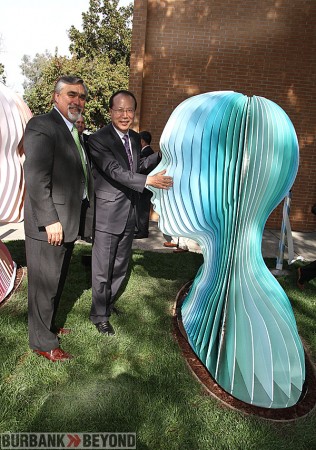 It all started 50 years ago, when a group of Burbank residents setup tables and collected books on San Fernando Blvd.  They were shipped to Incheon Korea and a bond or friendship formed and today, 50 years later, Incheon Korea is one of Burbank’s Sister Cities.

On Monday evening members of the Incheon Metropolitan City Dance Theatre preformed and on Tuesday they were back to preform during the unveiling and dedication of an art piece called, “Mutualism”, in the front of the Northwest Library. Joining the ribbon cutting ceremonies were Burbank Mayor Jess Talamantes, along with Mr. Kim jin-Young, The Deputy Mayor for Political Affairs in Incheon Korea.  Mr. Shin Yeon Sung Consul General of the Koren Consulate here in Los Angeles was also on hand. 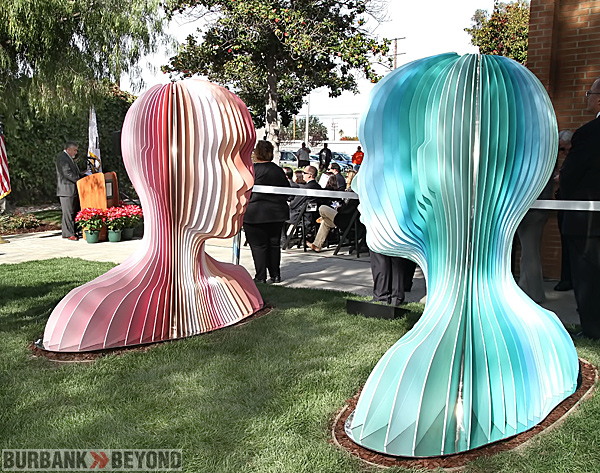 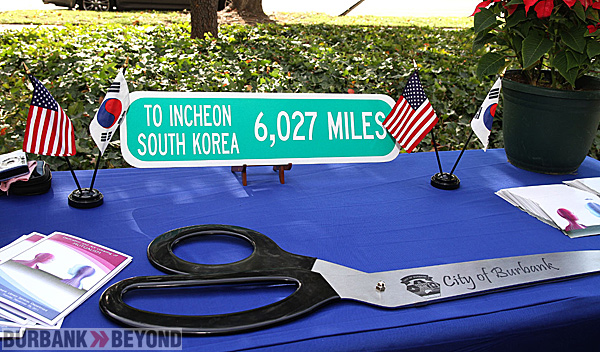 Burbank is only 6,027 miles from Incheon Korea.

Monday evening the Incheon Metropolitan City Dance Theatre preformed a special  preformance celebrating 50 years of Sister City Friendship.  The performance was held in the auditorium at Bellarmine-Jefferson High School.   The room was filled with guests who had the opportunity to see one of the most well known dance companies in Korea.  Incheon, South Korea is one of Burbank’s sister cities. 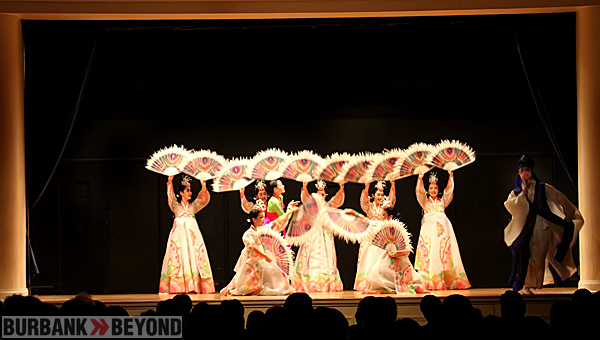 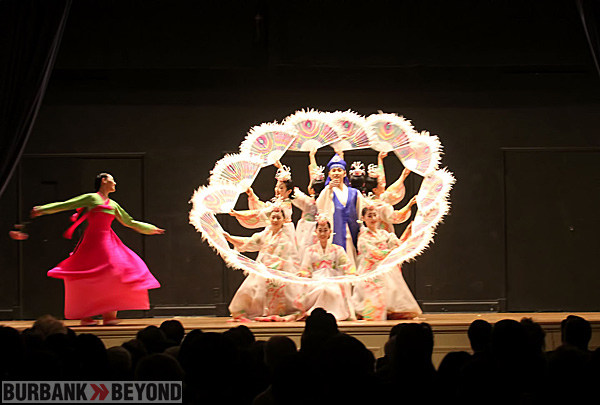 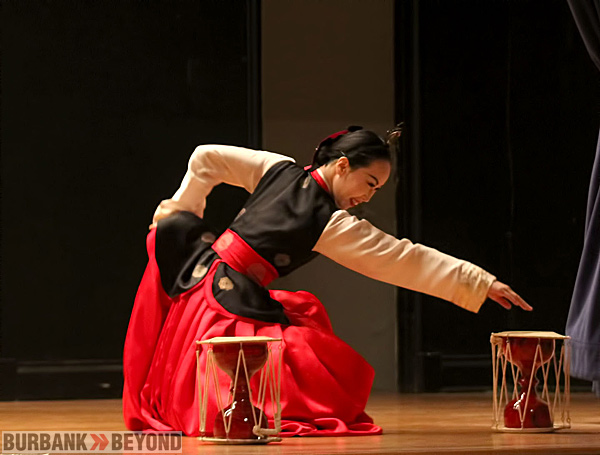 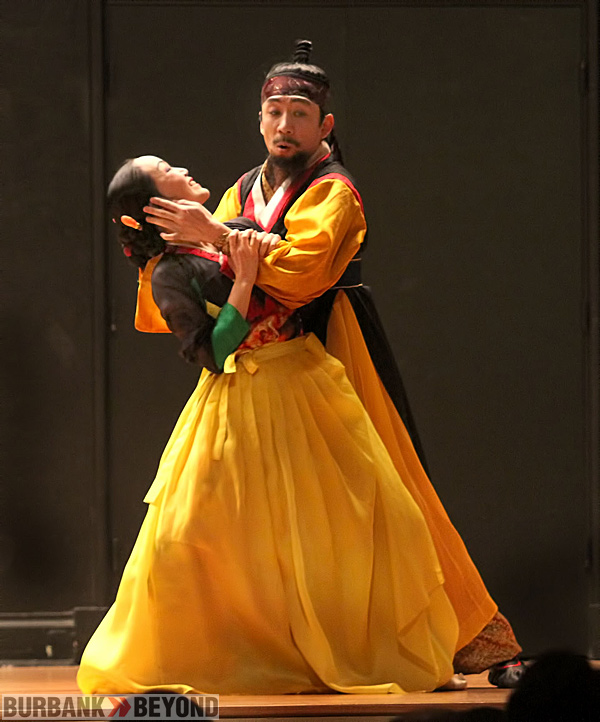 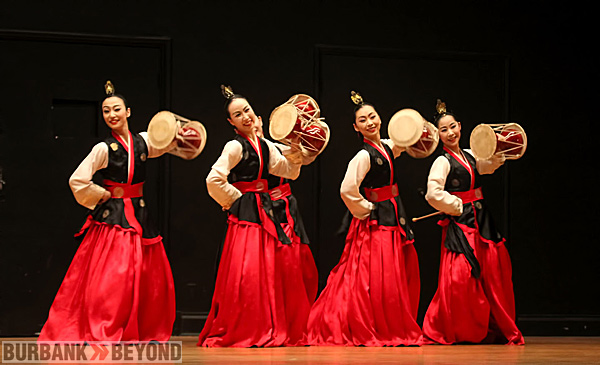 The Burbank Sister City Committee is looking for families to host exchange students from Ota, Japan, this summer.  The high school students will be in Burbank from July 26 through August 9 and host families are needed to house them during all or part of their stay.  For further information or if you are interested in hosting, please contact Sharon Cohen at the Burbank Public Library, 818-238-5551, or check the website, Burbanksistercity.org.