Due to increasing interest in the Burbank Unified inaugural Spanish Dual Immersion program, district officials plan to offer two Kindergarten classes and at least one first grade class for the 2014-15 school year. Director of Elementary Education Dr. Tom Kissinger leads two informational meetings for parents on the Spanish Dual Immersion program at the BUSD offices; the English presentation will be held on Monday, February 10, and the Spanish presentation on Tuesday, February 11.

“We want to make sure people understand every aspect of the Spanish Dual Immersion program before they commit,” commented Kissinger. “We have an overwhelming interest in this program and we will have to have a lottery for the classes.”

The district may have enough interest to add an additional first grade class for 2014-15. If that is the case, Kissinger said he would seek Board of Education approval to expand the program to that extent. If the Spanish Dual Immersion program continues to be successful, Kissinger has indicated the possibility of starting an Armenian Dual Immersion program in the 2015-16 school year.

The Spanish Dual Immersion Kindergarten program is housed at Disney Elementary and is populated by approximately 20-25% of children whose school of residence is Disney. The rest are drawn from throughout the district and permits.

Of the 29 students in the pilot Kindergarten program, the majority are English speakers and only three are totally fluent in Spanish, with four more who understand Spanish, Kissinger explained in a recent report to the Board of Education. The goal is to have a 50-50 ratio of fluent English and fluent Spanish speakers in each class. To this end, district officials have done more community outreach about the program and Kissinger feels confident the 50-50 ratio will be obtainable for the 2014-15 school year.

In the recent presentation to the School Board, parents of the children in the class, Disney Principal Melissa Kistler and Kindergarten bilingual teacher Juliana Sanchez all spoke in glowing terms about the Spanish Dual Immersion program.

“It’s a smashing success. It’s a very bright and enriching environment,” Kistler told the Board of Education. “It’s filled with positivity and the teacher is well-organized and highly effective.”

Sanchez described the daily activities of the class to the School Board members and explained that at the beginning of the year, comprehension was very challenging for the students. Eighty percent of the class is taught in Spanish and 20% in English for the daily Language Arts study.

“It’s incredible to see how far they’ve come in just a few months,” Sanchez said. “Now they know our routines and, for the most part, understand what I am saying.” 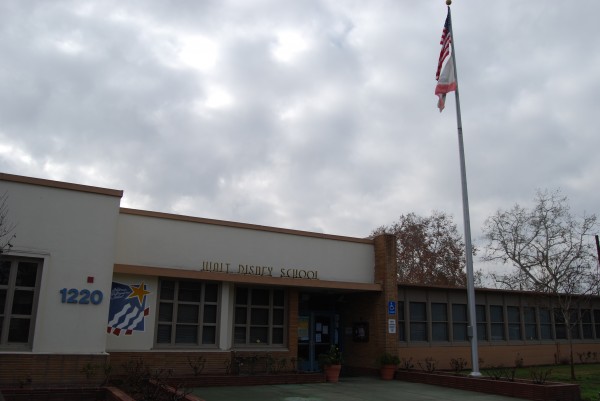 “Principal Kistler, the staff and the curriculum specialist at Disney have provided excellent support,” added Kissinger. “Parent volunteers work in the classroom and are well-utilized by the in-class aide.”

As the program adds more classes, more rooms will be needed and Kistler has a plan to use existing classrooms on campus, Kissinger told the School Board. The district is planning to form the classes by May 2014. The lottery for class spaces will begin February 10 and end April 11.

Each class costs approximately $110,000 per year to fund and a six-year program, with one class per grade, would eventually cost the district $660,000 annually. With two classes per grade, the cost would double to 1.2 million dollars.

In the long-term, Disney Elementary could become a language magnet school, but district officials also want to continue traditional classes for those who don’t want to participate in the Dual Immersion program. At the January 16 meeting, School Board members and Kissinger talked about the need for a long-term plan and ways to integrate middle and high school language programs.

“The benefit of this program is only enhanced if we can continue this through grade 12,” commented Board of Education member Larry Applebaum.

“We have had a significant number of our students who did not stay in this district because our neighboring schools offered this option,” BUSD Superintendent Dr. Jan Britz said at the meeting.

“We have a need and parents want more classes like the Dual Immersion program and we’re going to try and fill that need,” concluded Kissinger.

More information on the Spanish Dual Immersion program for primary grades can be found on the BUSD website or by contacting the district offices at 818-729-4401.

The class reaches 50% Spanish and 50% English instruction by fourth grade. BUSD encourages more native Spanish-speakers to apply for the Spanish Immersion Kindergarten, as Language Arts is taught in English and the English Language Learners program is available for those children requiring more English language development. An additional meeting focusing on the Spanish Immersion program will be held on February 10 and 11 at the district office.

District officials are considering a plan to add more elementary teachers to reduce class sizes in grades K-3 in the coming years. Currently, the Kindergarten class size is 28 children to one teacher, but BUSD is discussing measures to make that ratio 26:1 for the 2014-2015 school year.

Enrollment for the 2014-15 Kindergarten program begins February 3. The Burbank Adult School is located at 3811 Allan Avenue, near Hollywood Way. More information can be found on the district’s website at http://www.burbankusd.org/.