Tiffany Kaloustian, who was recently honored as one of the Teacher’s of the Year, would like readers to hear the story of Dylan  Mahoney and Dylan Cook who are the students who began the mission of  Lollipops for Love … resulting in the amazing donation of nearly $6,000 to be presented to the Make-A-Wish Foundation.


An assembly was recently held at Roosevelt Elementary School that was attended by the Mayor of Burbank as well as the Make-A-Wish Foundation’s president and CEO of the Greater Los Angeles Chapter.

After adopting the theme of “Making a Difference” in my 5th grade class, Dylan Mahoney and Dylan Cook began this fundraising effort in the hopes of making a difference in their community.  Throughout this entire process, they have expressed their hopes that one day, when this particular fundraising effort came to a end, they would be able to not only thank all who were involved, but to share with other children and adults of Burbank (and the world, if they had the forum to do it) the importance of volunteering in their community and making a difference for others.  They have always wanted to share their own experiences with others, and remind people of all the wonderful local organizations that are trying their best to help others every day.  Dylan Mahoney and Dylan Cook realize that these organizations do not have the resources to do it on their own, and that is where people like us come in.  These organizations cannot survive without the help of volunteers – whether it be hands on, financially, or otherwise.  Dylan M. and Dylan C. want the world to know how wonderful it is volunteering and to inspire others to follow in their footsteps!

“Lollipops for Love” was created by Dylan Mahoney and Dylan Cook (aka “the Dylan’s”).  As I mentioned in the above paragraph… for the 5th graders, this year’s theme is to “Make A Difference,” and they took it upon themselves to meet that challenge!  It was during a lunch recess one day last October that Dylan M. and Dylan C. decided they wanted to sell lollipops to raise money to help sick children.  That very afternoon, Lollipops for Love was born!  It was determined they would sell Dum Dum lollipops for 25 cents each with all the proceeds going to the Make-A-Wish Foundation of Greater Los Angeles.  I, of course encouraged this feat and with the approval of our school’s principal, Dr. Meglemre, these boys enlisted the entire 5th grade class to become a part of something bigger than themselves and join in this quest.

Our first attempt at selling lollipops came during Roosevelt Elementary’s Fall Festival in late October.  Low and behold, 5th grade kids walked around school grounds, clad with sandwich boards asking people to “buy something sweet for yourself, DO something sweet for someone else!” and “Make a difference, make a wish come true!”  By night’s end, these children raised close to $400 – on 25 cent lollipops!  Shortly thereafter, I contacted the Make-A-Wish Foundation and teamed up with a wonderful employee by the name of Ashley who was more than excited about our fundraising endeavor.

Next I thought …  “What if we work to raise enough money to adopt one child’s wish?!“ $2500 would be the goal we set for ourselves – the funds needed to grant a specific child’s wish!! Ashley met with our 5th graders and told them what an amazing job they had already done (we were the top fundraising school in all of Los Angeles, and we had only just begun.)  Ashley informed us that we would be able to adopt a specific wish and that we would be able to get a bio of the child we adopted by the end of the year before our 5th graders graduate so that we could bring this journey full circle and the children would be able to see the fruits of their labor!

Soon after, the motto became “Making A Difference, One Lollipop at a Time” and the sales became personal efforts.  Children from not only 5th grade, but several 3rd graders as well, took it upon themselves to sell lollipops on their own time to family and friends.  The Dylan’s, along with Dylan M.’s younger brother Luke, and cousin, Olivia, worked for 3 hours during the walk on Toluca Lake in December- collecting hundreds of dollars in donations and lollipop sales.  Next came our Variety show.  Again, all weekend (and through the following week), the Dylan’s, Luke and 5th grade volunteers, sold Valentine candy grams to audience members of the show and students of the school – bringing them closer to their goal with each sale.  The fundraising chart continued to grow, as did the children’s excitement and dedication to this cause.

Lollipops for Love sparked a school wide effort to reach their goal of granting a child’s wish.  Children were selling lollipops to family and friends, donating their allowances, asking for donations to Make-A-Wish in lieu of birthday gifts, selling mustaches, running lemonade stands on the weekends – all to help bring Lollipops for Love that much closer to helping a sick child’s wish come true! My Hula Club show graciously donated all its proceeds to Lollipops for Love, as did Mrs. Wills’ “Change Squared” fundraiser… asking people to donate and “make a wish for a wish!”  From two boys asking themselves “what if” came the birth of a fundraiser that turned into something more than just selling lollipops – it brought an entire school together!

By the end of March, these kids had not only raised their original goal of $2500, but almost doubled it!  Their hard work and dedication raised $4000 on behalf of the Make-A-Wish Foundation! Dylan M. next contacted the Spangler Candy Co. in Ohio, the distributors of Dum Dum lollipops and shared his excitement over their success with selling Dum Dum lollipops.  He expressed his desire to have the Spangler Candy Co. join forces with Lollipops for Love and be a part of something special.  They were so touched by Dylan’s enthusiasm, they agreed! A $1,000 donation by the Spangler Candy Co. put us at $5,000 and with it, two wishes could now be granted – thanks to Lollipops for Love and its partners!  Our newest grand total raised is $5,781.17!!  Since then, Dylan M. has written (through me) to the Ellen show,  is currently writing to various online shows and  doing whatever he can to get the word out that kids can make a difference if they try!

When our wonderful contact (Ashley) had moved on from Make-A-Wish LA to teach children in Africa, we joined forces with two new contacts, Development Associate, Deborah Herman and Dimitri Czupylo, Senior Director of Marketing and Communications. They were so impressed with Dylan M., they inquired about the Dylan’s coming to speak at their annual Board Retreat in May to discuss their experience with Kids For Wish Kids (the name of their fundraising program.)

Through it all, the Dylan’s have always been passionate about having an assembly with news coverage (or any media source) in hopes their story of teamwork and dedication to Making A Difference, would inspire other kids to follow suit.

In light of these troubled times, when spirits and moral are low, a story of an elementary  school community coming together for an honorable cause is exactly what the world needs to hear!  The world needs to know, in these times of doubt and uncertainty, our children are coming together in unity to make this world a better place! These boys and the whole school have inspired me, as their teacher.. in  more ways than I could ever express… 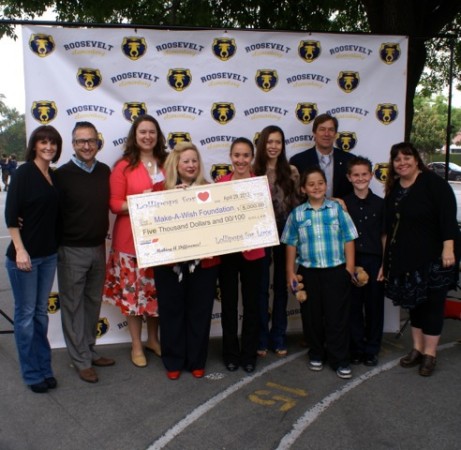 Burbank Elks Lodge No. 1497 is hosting its 4th annual Community Service Awards dinner on Wednesday, October 10.  Four recipients will be honored for their dedication and commitment to serving the Burbank community.

On Thursday evening April 28, the Masons of Burbank hosted a Public Schools Recognition Night at the Burbank Masonic Center (406 Irving Dr.). The event was hosted by the two presiding officers of the Lodges; Al Moen, Master of Burbank #406 and Michael Strand, Master of Magnolia Park #618. The Master of Ceremonies duties were shared by Erik Adams and Mike Campbell, Senior Deacons of their respective Lodges.

The festivities were kicked off with a musical presentation by solo vocalist, Talin Silva of Providencia Elementary School. The music then continued with a performance by “Clef Hangers”, an all Boy Choir from David Starr Jordan Middle School, conducted by Christine DeMore , with accompanist, Judie Stroh.

The program continued with a special recognition of three of Burbank’s Finest (local teachers that is), who were recommended by their Principals and selected for their devotion to their profession and dedication to their students. Those recognized were: Kay Cee Mills, Burbank High School; Ted DeVirgilis, John Muir Middle School; and Tyson Colt , Edison Elementary School.

Each teacher was presented with a framed Certificate of Appreciation, an engraved commemorative the occasion and a small Honorarium. Each of the musical presenters were given a small Honorarium to go toward their respective school’s program.

The evening concluded with music provided by the Burbank High School Jazz Band, conducted by Mike Stanley. After which all in attendance were treated to a Bar B-Q supper prepared by the Lodge members.