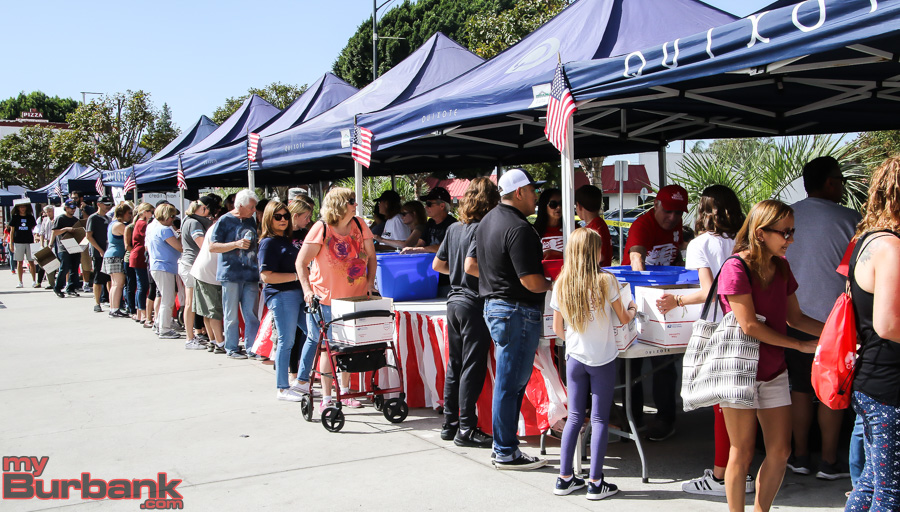 Last Saturday, volunteers as well as Veterans gathered in the UMe Parking Lot to put together boxes to be shipped to soldiers during the Thank-A-Soldier Event that had been started by Keller Williams and now hosted by UMe Credit Union as part of their UMe Cares outreach since 2016.

According to Joyce Starleaf of Keller Williams, “Thank a Soldier event began 9 years ago at Keller Williams Burbank.  We were located at 401 S. First Street, Burbank at the time and we had a huge lot to hold the event.  The original idea of the event was conceived by our manager at the time, Paul Sessum. He and I , Barry Gussow and Karen Volpei-Gussow were the original 4 musketeers eventually joined by many of the agents and staff at the office.

For this event, we held 3 fundraisers as it is an expensive endeavor.  Each box costs about $18 to mail and of course, we need lots of items for each box.” 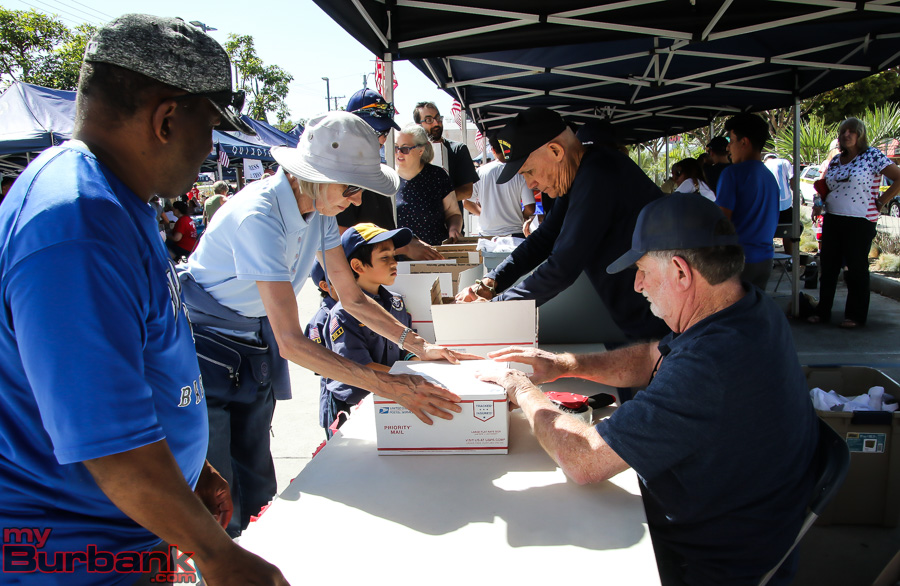 “Paul Sessum decided that he would like us to do something for the servicemen and women, continued Starleaf,  “For me, it was an easy decision and mine was based in part on my brother in law who served in Vietnam and as you probably know, they were treated poorly on their return and felt extremely unappreciated.  We started the event with just 100 boxes packed and we were thrilled.  It went up from there-250-then 400 and is now at about 1000 boxes.  We work in conjunction with Burbank’s Hands Across the Battlefield which is headed by Mickey DePalo.  He acts as an advisory capacity and works at  the event with us along with the people on his committee.”

DePalo has been a driving force behind the veteran group in Burbank, serving on the City of Burbank’s Veterans Committee and has been working on the revamping of the Memorial at McCambridge Park that will be ready for this year’s Veteran’s Day Celebration.

“Thank-a-Soldier packed over 935 boxes to be shipped overseas to the men and women who are defending our freedoms.” Depalo shared on a Facebook post, “Thanks to all the great people at Keller-Williams for their dedication and commitment and to all of our Burbank residents, ranging in age from kindergarten through senior adults for coming out and being a great help in packing and showing why Burbank is indeed a wonderful community! Rest assured, the Burbank Veterans Committee and Keller-Williams will mail each and every package early enough so that packages will arrive at our troops before Christmas!!” 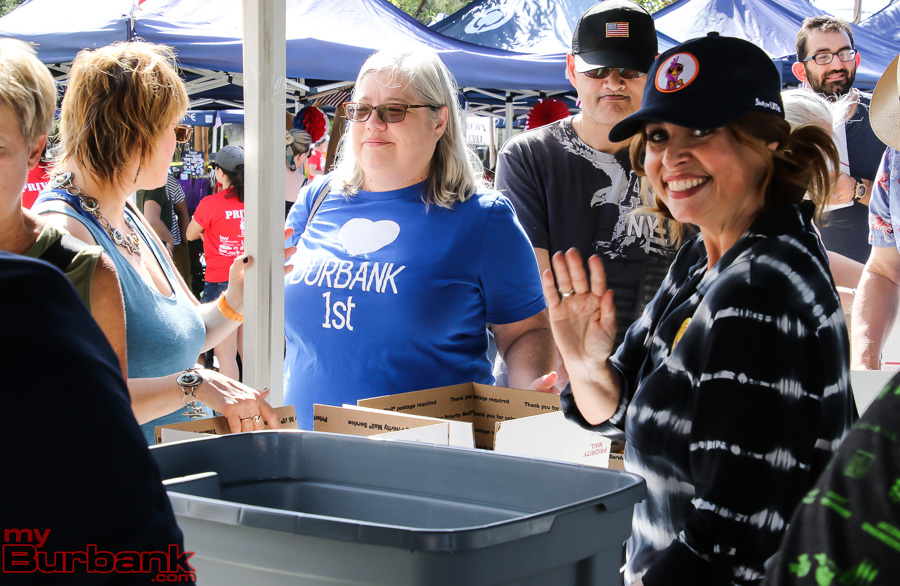 Anita Hutchinson of the UMe Credit Union was more than happy to donate the use of their parking lot for the assembly of the boxes. ” I worked the end of the assembly line, putting letters to soldiers (written by kids and community members) and photos from the event in each box before they were taped up — and thanking each person for participating — it was such a rewarding experience!

There were people of all ages there working together to put together thoughtful care packages that our deployed troops will receive during the holidays. Some veterans who were working the event as well as creating boxes told me that they, themselves, had received care packages when they were deployed, and told me how meaningful it was to have tastes from home.” 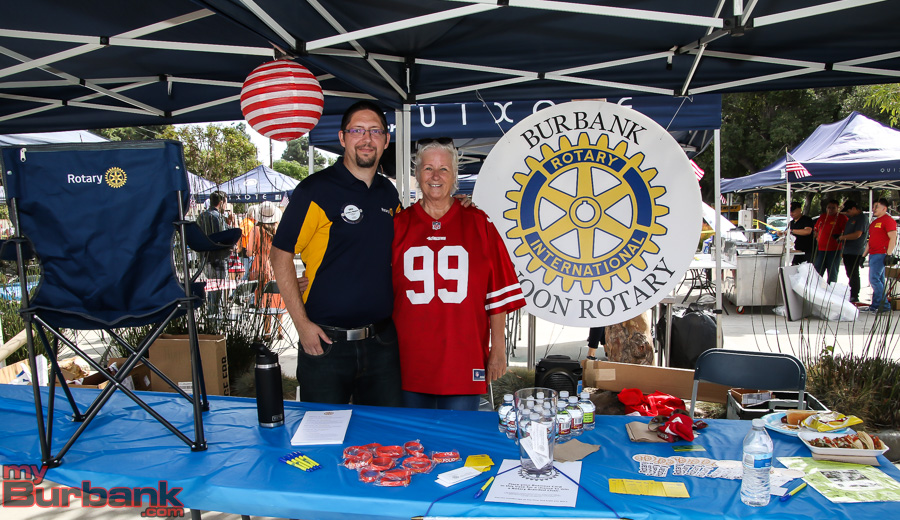 Starleaf was quick to praise UMe Credit Union and their members, “Once our building was sold on 1st street in 2016, we needed a place to hold our event. One of us spoke to Ume and they volunteered their lot immediately.  They have been very supportive.  We have access to their backroom two days before the event where we sort all of the product that is donated.  They also have bins in their lobby where they ask their members to contribute items and they a monetary contribution.”

All of the care packages will be shipped to Burbank residents serving their country. 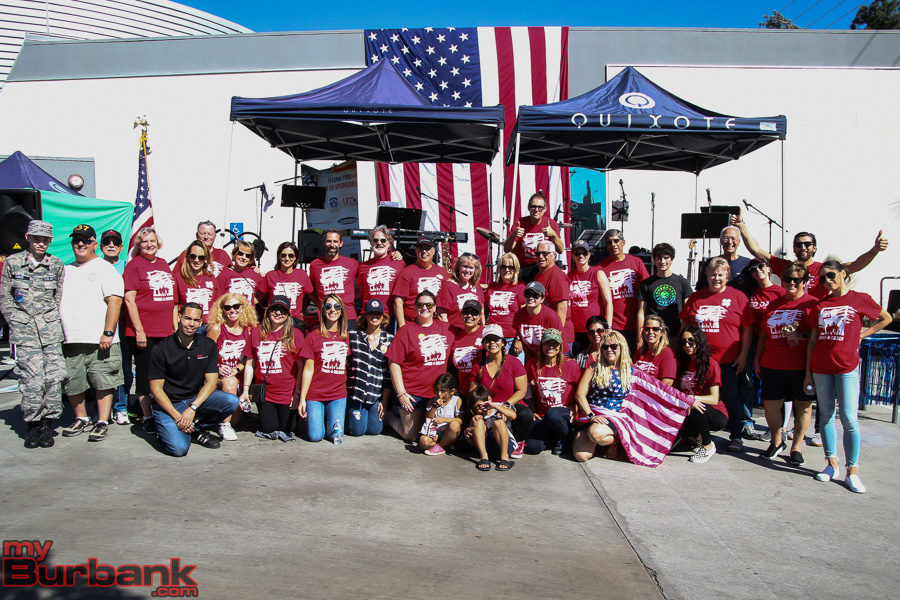 According to Starleaf there are many sponsors who donate during the year to make this happen including the Cusumano Family, The City of Burbank, Quixote Rentals, HouseAmerica Financial Services, Noon Rotary, First Trust Escrow, Vault Mortgage, Aldrich/Taylor Insurance, Handy Market, Tony’s Darts Away, Gain Credit Union and Flappers Comedy Club.

Starleaf added, “The event this year had many more volunteers than in previous years which made the workload much lighter. This is really a community event and there are many individuals who donate every year and volunteer every year.”

We’re pleased to partner with our friends at Keller Williams for the 9th Annual Thank-A-Soldier Care Package Project! Now through October 18th, you can drop off new personal supplies, non-perishable snacks, or entertainment items (books, magazines, DVDs, etc.) right here in our lobby. Just look for the big red bins when you walk in our doors.

Then, this Saturday, October 19th, join us in our parking lot for the big Thank-A-Soldier Care Package Assembly Party. There will be FREE food, live music, and fun activities from 10am – 2pm.

With your help and support, we were able to assemble over 1,000 boxes last year — and we are aiming for even more this time around! Every box will give our men and woman overseas a reminder of home and serve as a Thank You for their dedication and sacrifice.

Thank you all in advance for all your help and support, it really goes a long way. For a list of suggested donation items and more information, click here.

Wishing you the best,
Team UMe

Donation items will benefit U.S. troops stationed overseas, and should include new personal supplies, snacks and entertainment items. See the full list of accepted donations below.

UMe is working through its philanthropic arm UMeHelps, an initiative that facilitates members and the Burbank community supporting local organizations and individuals in need.

After the donation period, on October 19th, UMe will host the Thank-A-Soldier Care Box Assembly and Community Lunch Event in partnership with Keller Williams. The event will be held in the UMe parking lot from 10 a.m. to 2 p.m., and will feature live music and free lunch with a donation. Donated items will be packaged on site and readied for troops as a thank you for their hard work and sacrifice.

UMe is located at 3000 W. Magnolia Blvd. in the Magnolia Park neighborhood of Burbank.

° soap (no heavily scented soaps such as Irish Spring or Zest, please)

Soldiers overseas will be very happy to see all the boxes coming from Burbank, California, this holiday season. 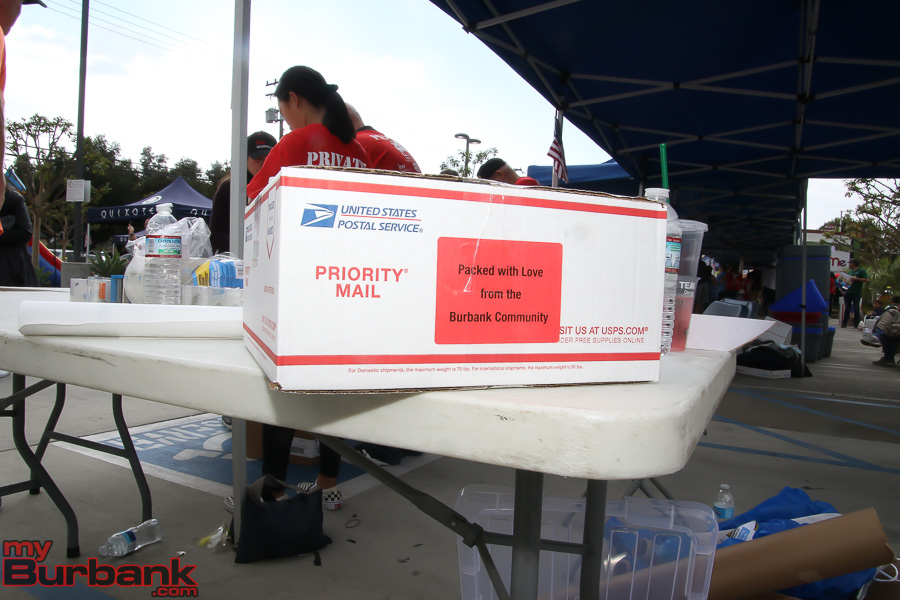 While some packed boxes, others wrote personal letters of thanks and children colored pictures to be included in the packages. 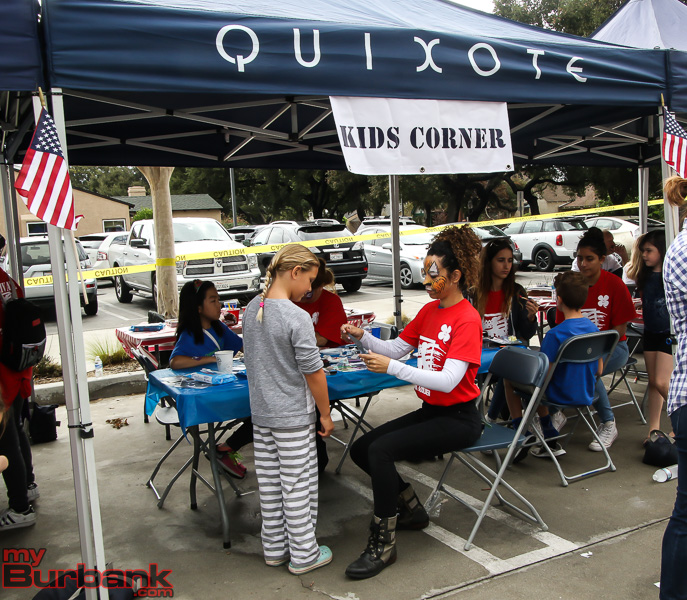 Here is a photo gallery from the event. 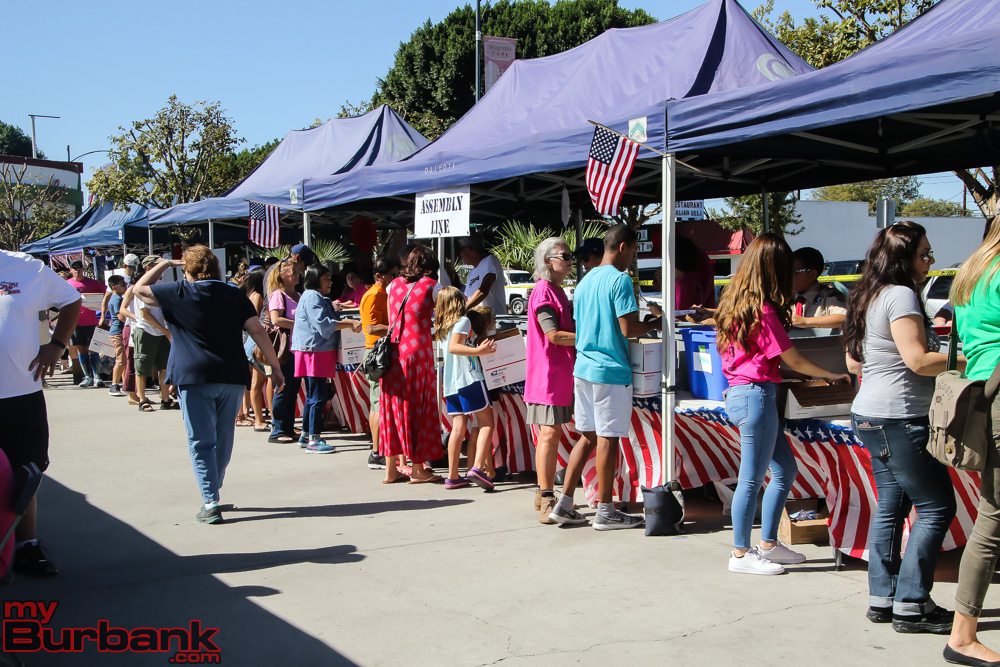 UMe members and community neighbors brought donations to the credit union branch during September and October to be packed up by volunteers.

This past Saturday UMe hosted the Thank-A-Soldier Care Box Assembly and Community BBQ Event which feature live music and free lunch (with a donation). Donated items were packaged and prepared for troops as a thank you for their hard work and sacrifice.

From September 11 through October 20, 2017, UMe members and community neighbors can bring donations to the credit union branch during business hours. 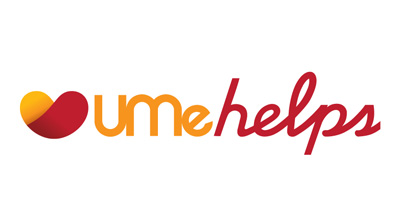 The project is part of UMeHelps, an initiative that allows UMe’s members and the Burbank community at-large to support local organizations and individuals in need.

Following the donation period, UMe will host the Thank-A-Soldier Care Box Assembly and Community BBQ Event on October 21, 2017. Held in the credit union parking lot from 11 a.m. to 2 p.m., the event will feature live music and free lunch (with a donation). Donated items will be packaged and prepared for troops as a thank you for their hard work and sacrifice.

In the spirit of the credit union philosophy of “people helping people” – we’re asking UMe members to help us collect donations for the 7th Annual Thank-A-Soldier Care Box Assembly project. You can drop off donations at the Credit Union anytime September 11 – October 20.

Acceptable donation items are listed below. Thank you!

° soap (no heavily scented soaps such as Irish Spring or Zest, please)