On Thursday afternoon, September 19, the Verdugo Aquatic Center was transformed into a “Rock A Hula”-themed party for Burbank seniors, 55 and older. There were over 300 in attendance. 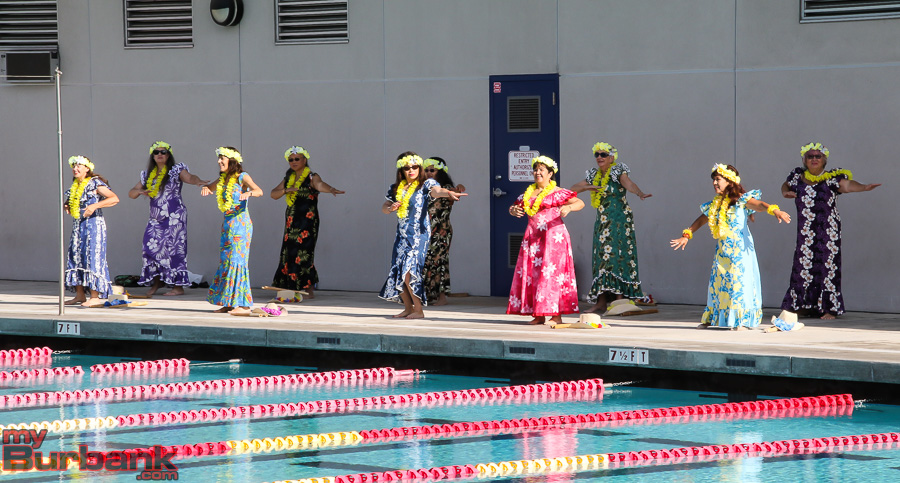 This was the sixth year that the Parks and Recreation Department transformed the pool area into a hula party, with blowup palm trees, tiki torches, table decorations and dozens of beach balls in the pool.

According to Lynn White-Shelby, Burbank Senior Board Chair, this year’s event was one of the best Rock A Hula events ever held. 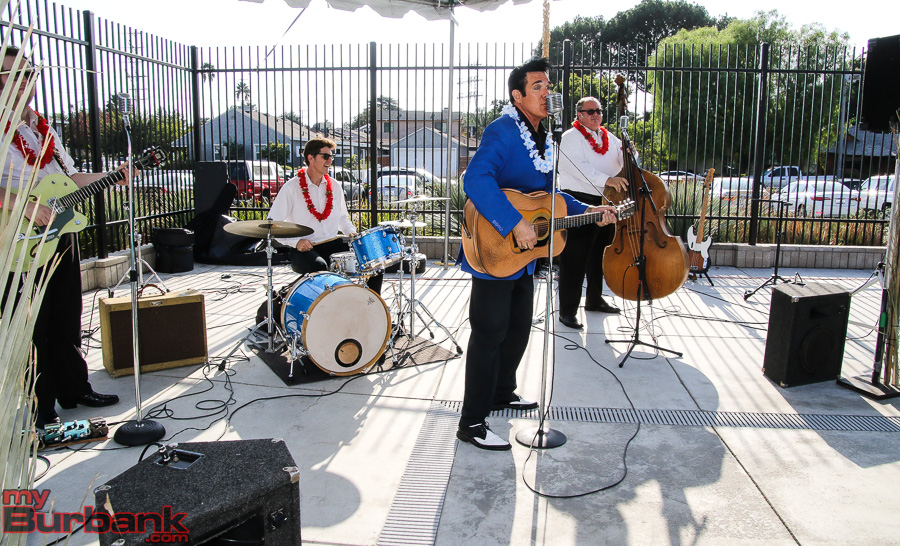 As in past years, Elvis impersonator and singer Elvis Scot Bruce and his band performed traditional Elvis songs along with Don Ho numbers for those in attendance.

Hotdogs were served along with ice cream sandwiches, chips and drinks. While some ate, others danced and some even exercised in the pool.

Here is a photo gallery from the Rock A Hula event: 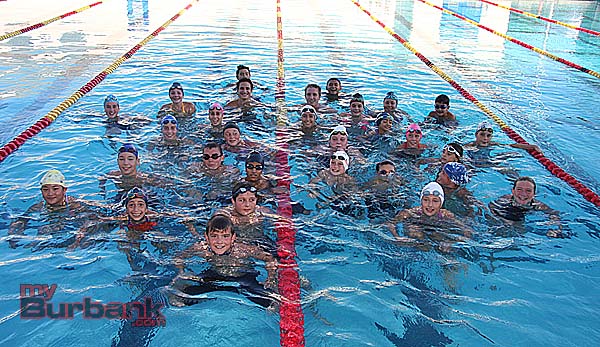 Splashes of excitement and enthusiasm have been echoing from the distance every afternoon at the Verdugo Aquatic Center. The Burbank Los Angeles Swim Team, also known as BLAST, is proud to call the pool its home.

The newly formed swim program established itself in September of 2013 as a full-service swim club designed to serve the city of Burbank. 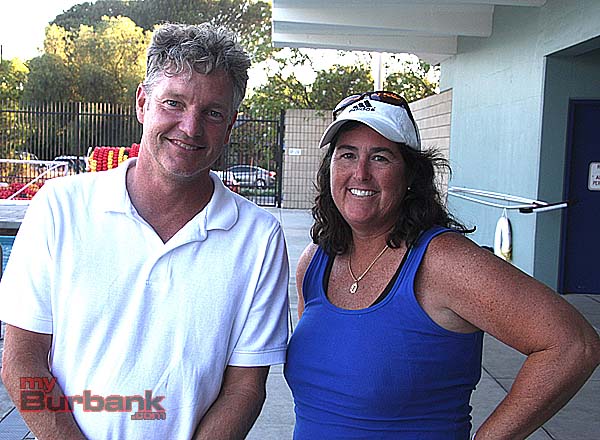 More than 60 young boys and girls ranging in age from six to 18 have joined the program since its inception 11 months ago. Novice, age group and senior teams are available. To be eligible to join, swimmers must be able to swim (continuously) two lengths of the pool freestyle and two lengths of the pool backstroke. They should also have experience with the four swim strokes.

With more than 20 years of experience in coaching and training, Peter Lambert was hired as head coach to oversee the program. A graduate and collegiate swimmer at the University of Wisconsin, Lambert is a member of American Swim Coaches Association and is an accredited swim coach with USA Swimming.

Lambert is joined at BLAST by fellow coaches Meg Patrick and David Wilson.

BLAST is a member of both United States Swimming (USAS) and Southern California Swimming (SCS). The team currently competes in the silver division of the Pacific Committee League and has already reaped the rewards of hard work by winning several meets. 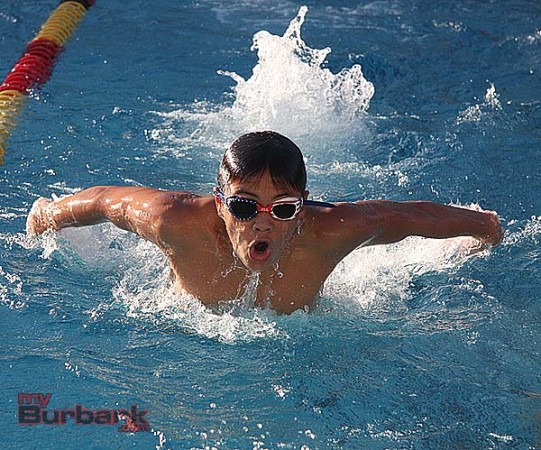 Ian Flinchbaugh, in the butterfly, and BLAST are swimming full force in the right direction (Photo by Dick Dornan)

“At first many of our swimmers were hesitant in competing at the club level,” Lambert said. “Now they are doing well. We have some hidden gems here. I’m super proud of them.”

In addition to his duties for BLAST, he is currently the swim coach at Marlborough High School where he won a CIF championship in 2010. Lambert relishes the challenge to build a program from scratch into a thriving organization that he hopes one day will compete at the national level.

“This group is so fantastic. We have great parents and great kids,” Lambert said. “They are smiling and they are happy. I really want to build a quality team. I want to be practicing at the National level.” 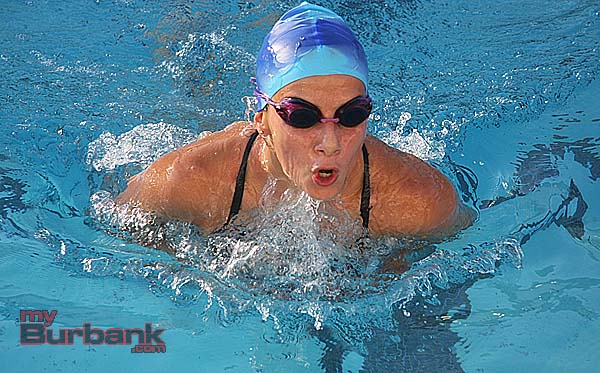 Tina Melkonian in the breaststroke (Photo by Dick Dornan)

Lambert brings not only a wealth of experience in the pool to the position, but also an abundance of knowledge as a fitness expert. He founded Streamline Fitness, Inc. and is the Aquatics and Fitness Director at the LA Tennis Club and Aquatics Director at the Brentwood Country Club.

Since the inception of BLAST, Lambert has focused in on technique and attention to detail to help the growth of each swimmer. He now includes dry land workouts to build and strengthen the core muscles. 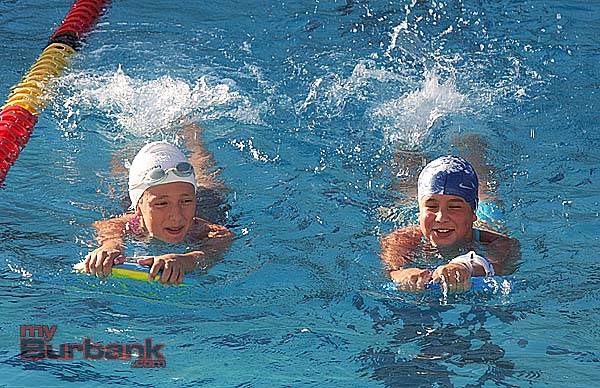 “For the first two months we worked on technique only. They didn’t know how to swim basically. Then we started to build an endurance base. By the time we got into the winter break, they were getting into shape with good form,” Lambert said. “Now we are starting to see their times plummet which is great for us. They are practicing completely different. We gradually eased them in and they are now responding. Everyone is very happy.”

Practices are held daily from 5 to 7 p.m. preparing athletes to maximize their aquatic potential. Members include kids as young as six-years-old (novice), middle school (age group) to experienced swimmers (senior) such as Dexter Brown and Madigan Roll, seniors at John Burroughs and Burbank High School, respectively. 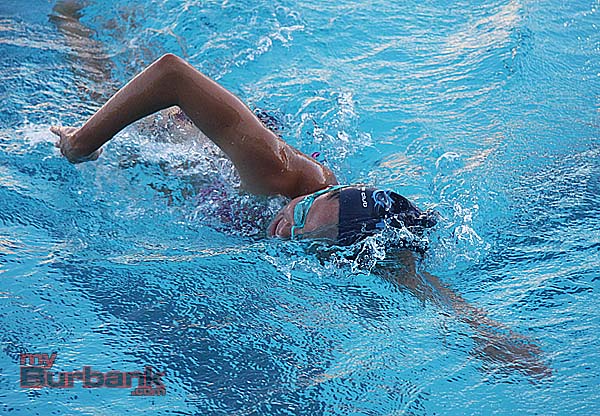 “I enjoy it because it’s close to home. It was too hard to juggle school and family at the same time while driving far away. So having this in Burbank really helped me focus on my school work as well as my swimming,” said Roll, 16, who used to swim for the San Fernando Rattlers and at the Rose Bowl Aquatics Center. “The coaching is not just high intensity training but it also works on technique.”

Roll has been a part of a Burbank High swim team that broke five school records this past season.

Brown credits Lambert as the reason for his success. 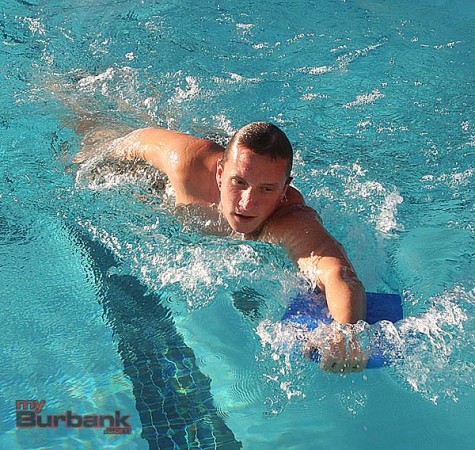 “I swam throughout high school under Coach Peter. I was dropping time at every meet which is always a good thing,” he said. “But when I started to drop major time through my taper (rest before big meets), that was all because of Coach Peter. He would plan out how much yardage to do every day. It was exactly what I needed to do well at league finals and CIF.”

Liz Roll, mother of Madigan, and Alexandra Helfrich have seen first-hand the maturation and development of BLAST and how it has benefitted their daughters.

“He has taken a lot of kids who were good swimmers and made them into great swimmers. Peter talks about building character and quality. He stresses the importance of not only academics and athletics but being a steward of the community,” Liz said. “My daughter wants to swim competitively in college and this will give her a leg up to do that. 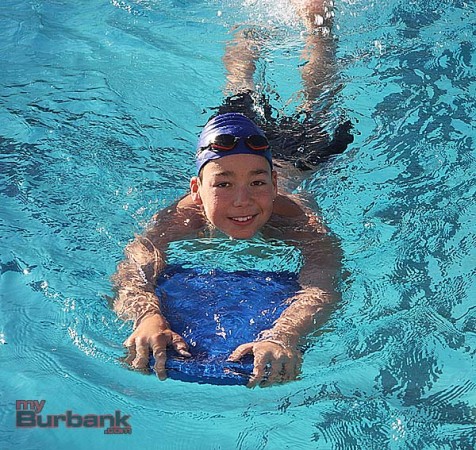 “A lot of kids are intrigued by it and are coming over. What I really think will help the high schools are the younger kids who are in the novice age group or are in middle school now. In a couple of years, we will have stellar high school programs.”

“This is a terrific opportunity right here in town to excel at swim. Kyra, my 15-year-old junior at Burroughs, is training there and has greatly improved,” Helfrich added. “She will likely have a strong high school record with the extra coaching support. I think BLAST has better coaches, more individual instruction and a better team spirit. It’s a real gem right here in town. And one of the coolest aspects is that both JBHS and BHS athletes are training and competing together. We’re starting to see a difference in the high school swimmers who train there.”

Lambert is looking for kids of high standard (in and out of the pool) who possess good character, dedication, and a hard work ethic.

Mikayla Gardner, 13, is one of a handful of middle school kids who continues to improve daily under the tutelage of Lambert.

“I like it because we get a good workout and we get better. He’s taught us a lot of technique and ways to work together,” said Gardner, who attends Jordan Middle School. “It also gives you self-esteem to join other activities because it makes you feel more athletic and gives you a chance to socialize with your friends. It’s not all work. We have fun at the same time.” 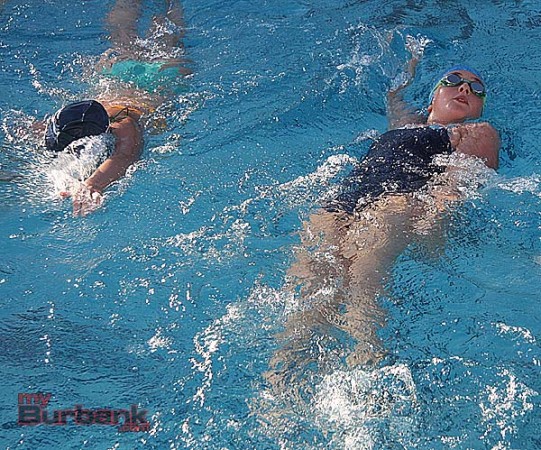 Swimmers work on the backstroke (Photo by Dick Dornan)

The swimmers, parents and staff at Verdugo Aquatics Center enjoy each other’s company and are very excited for the future of the program. Lambert has created a family atmosphere where swimming goes hand-in-hand with activities such as laser tag and bowling which in turn builds team camaraderie and strengthens relationships.

“I’m an advocate of the sport because of the discipline and hard work involved. It’s a solitary sport- it’s kind of you and your bubbles,” Lambert said. “But we try to create some great opportunities for them to function as a family. We want to cultivate that family feel.”

Recently, BLAST held a “swimathon” fundraiser that brought in more than $10,000 which will help purchase new equipment and bring state-of-the-art technology to Verdugo.

Five-time Olympian Dana Torres, owner of 12 Olympic medals (four gold, four silver and four bronze), visited with BLAST back in May. She shared valuable insight into her journey as a swimmer.

The two coaches hard at work (Photo by Dick Dornan)

Ian Flinchbaugh, in the butterfly, and BLAST are swimming full force in the right direction (Photo by Dick Dornan)

Tina Melkonian in the breaststroke (Photo by Dick Dornan)

Swimmers work on the backstroke (Photo by Dick Dornan)