A large part of Burroughs’ success this past spring was the sturdy pitching by All-CIF pitchers Thomas Wilson and Danny Bustos. They were simply the best duo in the surrounding area.

With the summer VIBL season winding down, two pitchers have emerged for the Indians with several strong performances. But none like Friday night’s VIBL playoff opener against Granada Hills.

Senior Kyle Nicol absolutely dominated the Highlanders in a complete game effort as Burroughs advanced to the quarterfinals with a 6-0 victory. The Indians (14-7) will play at No. 4 Saugus on Monday at 5 p.m.

“I was happy with their demeanor and attitude. We came out real strong,” Burroughs coach Craig Sherwood said. “We got comfortable once we got going but with Kyle Nicol dealing on the mound he was lights out.” 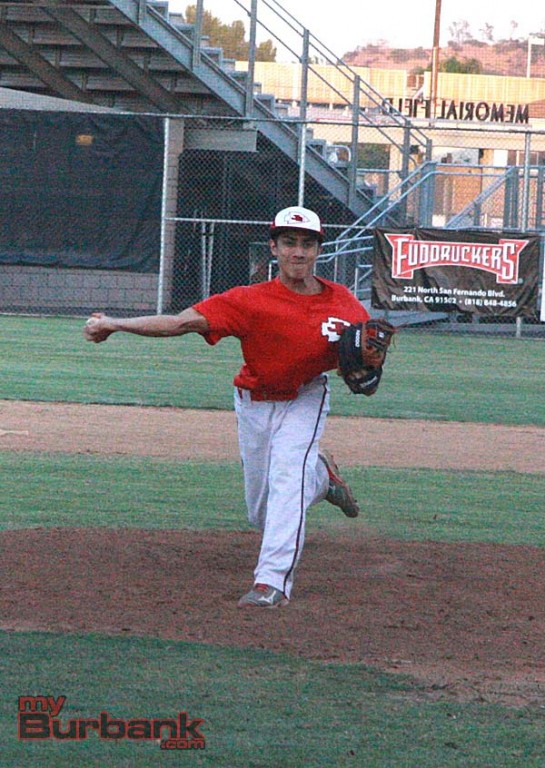 The right handed submariner baffled Granada Hills (4-11) from the outset as he threw a three-hitter, allowing only one walk while striking out 13 batters.

“I was feeling really good out there. From the first pitch I had a lot of energy so I knew I was going to last the whole game,” Nicol said. “Everything was working today. Both sliders and my fastball. I was able to locate everything especially inside. That was definitely my best performance on varsity.”

Nicol, who improved to 4-0 and lowered his earned run average to 1.08, was a spot reliever during the Indians league championship run. Now he is taking full advantage of his opportunity to impress the coaching staff with his desire to be the team’s ace.

Nicol’s mixture of two different sliders, changeup and fastball had the Granada Hills players’ heads spinning and bats whiffing. He struck out two batters in five different innings and ended the game throwing 90 pitches including 63 for strikes.

“Kyle was focused,” Sherwood said. “He knew what he wanted to do from the very start. He had the eye of the tiger the whole game. Every pitch he threw was fantastic. He was on.”

Nicol and senior Jesse Galindo (2-1) have had an excellent summer thus far. Galindo leads the team with a miniscule 0.33 era. Both are parlaying their junior seasons into productive summer auditions for their senior campaigns.

Burroughs, seeded No. 5 in the playoff field, jumped out to a quick 5-0 lead after the first inning and coasted the rest of the way. Junior Alec Saavedra broke the game open with a bases-clearing double to left center giving JBHS a 4-0 lead. Randy Catlett followed with a double to right center scoring Saavedra. 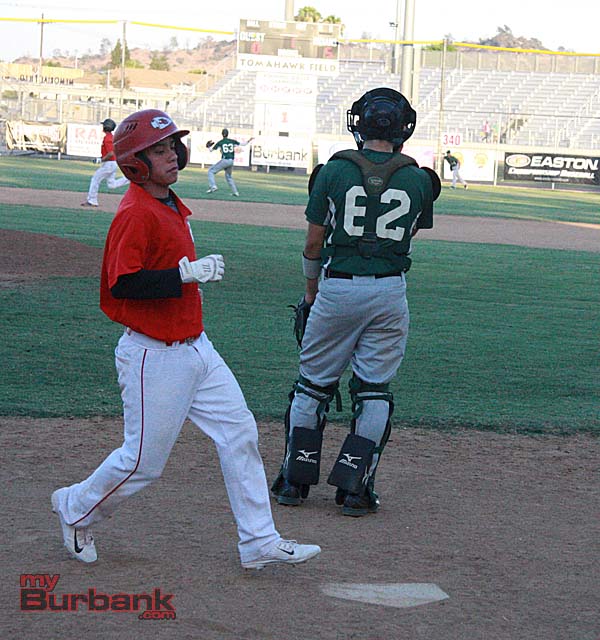 “I’ve been swinging at high pitches so I knew to stop and it was low so I just tried putting the bat on the ball and it worked,” Saavedra said. “It felt good when I got to second. I was happy everyone scored and I got those three RBIs.”

“This team comes out hot with the bats. Everybody is just swinging,” said Nicol. “Everybody has a good attitude. We are a good team right now.”

Tanner Whitlock and Justin Palafox added two hits apiece as the Indians won their 14th game of the summer. A year ago, Burroughs went 16-7 during the summer and used that as a springboard to a 24-5 season. Last year’s Tribe went 65-22 overall during their 11 month journey together.

This summer’s edition has seen young players such as Palafox and his brother Nathan, Sage Del Castillo, Matthew Rudas and Mitch Lefevre step up in their first varsity action while returners in Whitlock, Catlett, Omar Tejeda and Jason Whaley continue their stellar play for what is shaping up to be another promising season for the boys at Burroughs.

The 2015 baseball season ended five weeks ago and Burbank and Burroughs have since turned the page and begun moving forward. Ten All-League players have graduated from the two schools combined leaving a plethora of young talent ready to step up and fill their shoes.

On a mid-summer night’s VIBL matchup at Burbank High Monday night, the Bulldogs prevailed with a 4-1 victory over the Indians behind an outstanding pitching effort from Henry Leake. The junior fired a complete game five-hitter allowing one run, one walk while striking out seven. 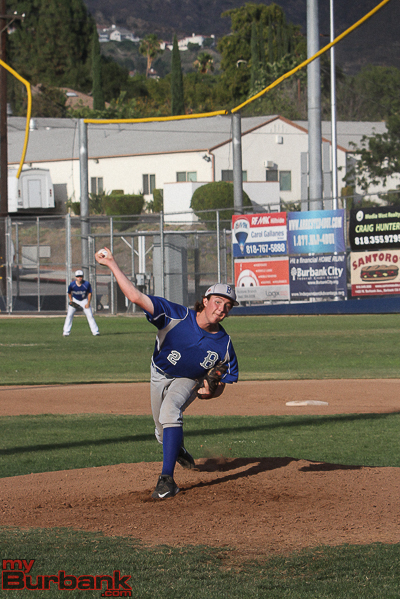 Henry Leake earned the win for the Bulldogs (Photo by © Ross A. Benson)

“He was pretty lights out. He’s a warrior,” Burbank coach Bob Hart said. “He’s got a competitive edge to him and a pretty good poker face when it’s not going well. That’s a good recipe for success.”

Burroughs scored its lone run in the top of the second inning. Leake shut the door on the Indians the rest of the way as Burbank improved to 4-4 in the Valley Invitational Baseball League.

“I felt really good. I kept the ball low and they didn’t get too many hits. I had really good defensive support,” Leake said. “Winning this game feels really good. It gives us confidence and it is going to propel us.”

The Bulldogs played a solid game of small ball putting the pressure on the Indians defense multiple times. 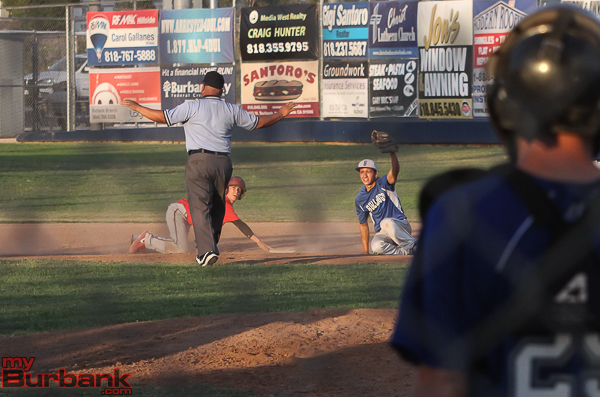 Burroughs’ Tanner Whitlock slides in safely for a double ahead of the tag by Ky Tanner of Burbank (Photo by © Ross A. Benson)

Burbank put two more runs on the board in the sixth courtesy of two push bunts up the first base line. First, Kelley drove in Chong with a perfectly placed bunt and moments later Leake put down a push bunt that brought confusion upon the Indians’ infield resulting in Tanner scoring and Leake earning an infield hit.

“We really emphasize that because we don’t have monster 350-foot home run guys,” Hart said of the Bulldog’s offense. “If we buy into that concept, it will be good for us. It puts pressure on the defense and it opens things up.”

Leake’s strong performance was indicative of his progress this summer. Hart has been very happy with what he has seen from Leake as well as the entire Bulldogs’ summer squad.

“Henry Leake has had an incredible summer for us,” Hart said. “He does everything we ask of him. He can pitch, catch and play any position on the infield for us. He’s improved his stock more than anybody.

“Talent wise we are probably not as talented of a group (as last year), but maybe a group that can win more games. They buy in to more of the simplistic team related goals that we have.”

Hart has been focusing on instilling a “competitive edge- bring the fire every inning” type of attitude that he hopes will define the 2016 Burbank team. Last season’s team finished 12-12.

Across the diamond the Indians struggled defensively on their bunt defense as they slipped to 10-6 on the summer. All nine starters graduated from a team that went 24-5 back in May. Despite the heavy losses to graduation, Burroughs has exceeded expectations winning 10 games this summer, tied for most in the VIBL, including significant wins over LA City champion El Camino Real (twice), Kennedy, Hart, Saugus (twice) and Crespi. 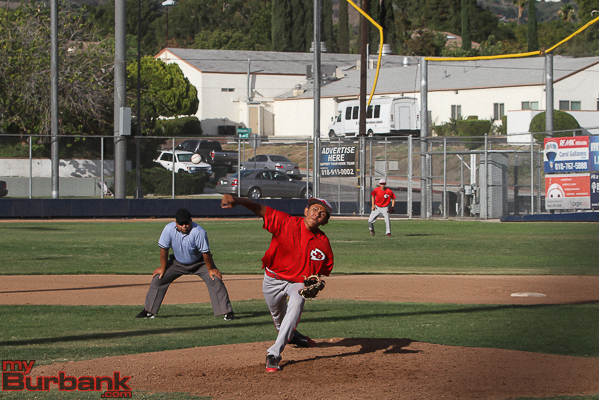 Despite the loss, Jesse Galindo has had a productive summer for the Indians (Photo by Ross A. Benson © 2015)

“From the first game I’ve seen a lot of improvement. We lost 15 seniors so we are a young team,” senior catcher Tanner Whitlock said. “Learning the speed of the varsity game is what we have been focusing on this summer. We’ve been getting better at that as the summer goes on.”

Whitlock had the game’s only extra base hit, a double in the fifth. Whitlock is making the transition from the infield to catcher, a position he hasn’t played since his freshman year.

“I’m rusty back there but I’m getting used to it and getting better every game,” he said. “I’m learning from every game and every pitch.”

It was only a summer league game but it provided a glimpse into the future of these two programs. Both teams are happy where they are at heading into July and the VIBL playoffs beginning July 10.

“We have two or three seventh inning wins this summer,” Whitlock said. “We are a scrappy team and we won’t go down without a fight.”

“This is the highest we’ve felt this summer,” said Leake of the win over their crosstown rivals. “I hope we keep playing like this every day and if we do we will be a really good team.” 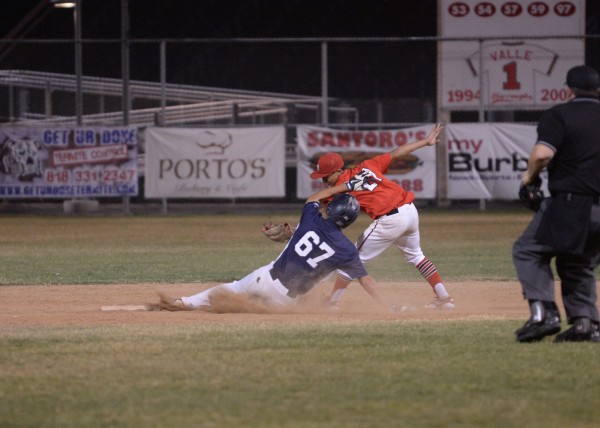 It’s only mid-July, but tomorrow night’s summer VIBL playoff game between Burroughs and Burbank should be quite exciting. Anytime the two rivals go head-to-head in any sport perks the interest of the average sports fan.

Why not gather together and enjoy a midsummer night’s meeting of hardball? Game time is set for 7 p.m. at Burroughs.

Yes, this isn’t the CIF playoffs. But it does represent a game that will determine who advances in the 14th annual Valley Invitational Baseball League playoffs. Matchups are listed below in the tournament bracket. 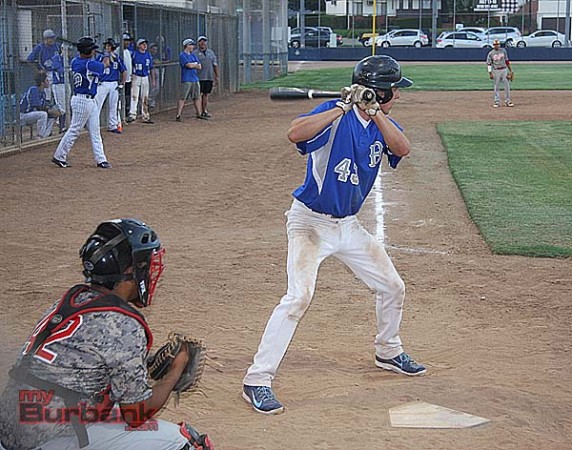 The JBHS/BHS winner will advance to the quarterfinals on Saturday against the winner of Cleveland/Loyola. If the Indians win, they would host the contest on Saturday. If the Bulldogs prevail, they would travel regardless. Games for Saturday are scheduled for 10 a.m. unless the two teams agree to another time.

Semifinals are set for next Tuesday and the championship game for Thursday, July 24, at 7 p.m. at Birmingham High School. The VIBL website is myburbank.com/VIBL.

Burroughs, the No. 4 seed, enters the game with an impressive 15-6 overall record including wins in 12 of its last 14 games. No. 13 Burbank sports a mark of 3-6. Each team was given a required 10-game VIBL schedule. Any other games played or cancelled were at each program’s discretion.

The Indians chose to play an aggressive summer slew of games and it has paid off. Recent significant victories include defeating Chatsworth, 4-3, in nine innings, Birmingham (6-0), Camarillo (4-1), Loyola (7-3), and Crespi, 7-0. 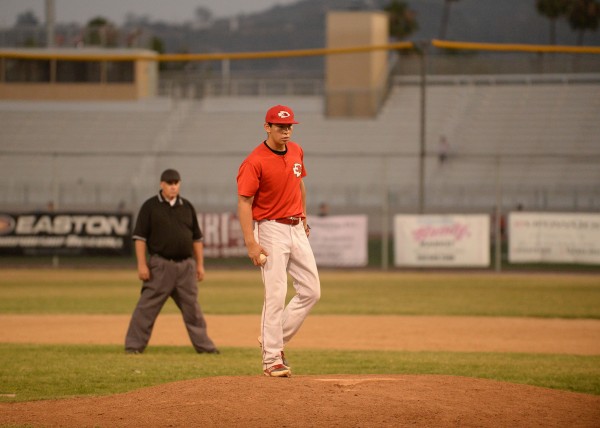 Burroughs summer success has come in large part due to the consistency of the pitching staff which currently has a 3.08 era. Ace Danny Bustos owns a 3-1 record with a 1.55 era. He is the expected starter to face the Bulldogs.

At the plate, catcher Tyler Lewis leads Burroughs in hitting with a .408 clip with first baseman Noah Hoed right behind at .405. Seven other Indian players are batting .361 or higher having played in at least 10 games. Newcomer Omar Tejeda from the JV squad has been a pleasant surprise at the plate and defensively at third base.

Burroughs had nine players with at least one hit against Crespi and Chatsworth (15 hits total; six players with two hits apiece). They are batting .326 as a team.

A complete list of Burbank stats was not available as of press time though shortstop Cameron Briggs has had an extremely productive summer at the plate and on the mound. Other players making a positive impression for the Bulldogs include Randy Higgens, Ryan and Danny Porras, Jake Noud and Garrett Dolan.

Each program has a host of seniors and plenty of game experience for the upcoming spring season. This summer tilt should be an entertaining ball game between the cross-town schools. Anything less would be a surprise.

Ryan Galan was the game-winning pitcher vs. Chatsworth (Photo courtesy of Mitch Haddad)

Thomas Wilson had the game-winning hit vs. Chatsworth (Photo courtesy of Mitch Haddad)

Cameron Briggs of Burbank prepares to hit vs. Cleveland (Photo by Dick Dornan)