While the victims names have yet to be released by police or coroner officials, word started to spread around Burbank about the five young people killed on Saturday morning when the car they were riding in failed to make the corner and crashed into a guardrail and then cement under crossing on San Fernando near the Scott Road off ramp. 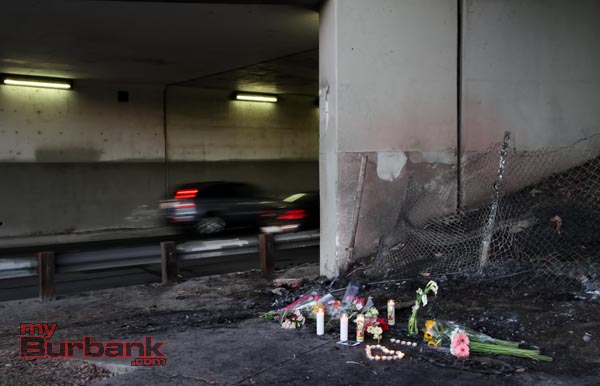 As cars speed by the memorial grew in flowers and memories and people too. (Photo by Ross A. Benson)

There were six in the car total, with one 18 year-old girl being pulled from the wreckage before fire consumed the Nissan. The lone survivor was taken to County/USC Medical Center with a reported broken leg and a dislocated hip and is expected to survive. It has been widely circulated that the five were all Burbank residents.

While the cause and conditions of the accident have not been fully investigated yet, people at the scene cared more about consoling each other and asking why five young lives were taken so early. 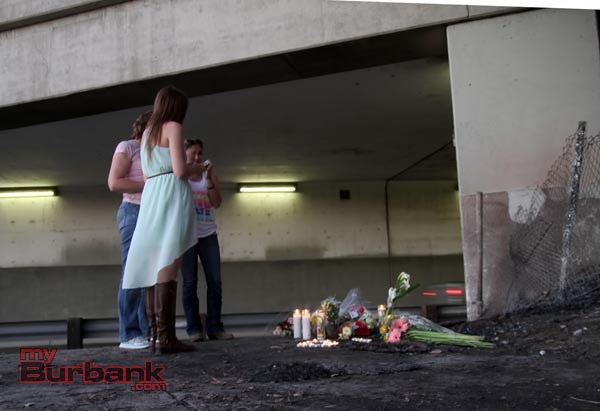 Flowers, pictures and personal items were left as a memorial on the spot the vehicle came to rest. Many sat quietly and started straight ahead while other were extremely vocal in their pain. As time went on, more and more people gathered at the site.

Burbank police responded to the scene to help with crowd control, helping to keep people out of the dangerous stretch of road that has seen many accidents over the years and is scheduled to be closed when Caltrans builds the new off ramp for the Empire Center. Members of the news media were also on hand to capture the many tributes.

Note: Ross A. Benson Contributed to this story 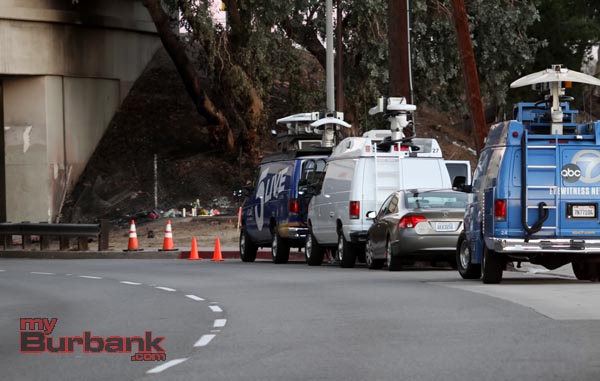 Every major TV station came to the scene for coverage. (Photo by Ross A. Benson)

Police are still investigating this accident that occurred at Bel Aire and Verdugo.  One of the cars hit a cement wall of the corner house, sending its driver to the hospital with Burbank Paramedics.