The redshirt sophomore and former Burbank High star running back made a significant impact last season and his coach and teammates have even higher expectations for him this season.

Head coach Mike Leach, fellow running back Jamal Morrow and linebacker Peyton Pelluer were on hand for Pacific-12 Conference Football Media Day Thursday at Hollywood and Highland to share their thoughts about Williams and the Cougars’ upcoming season. Washington State opens its season Sept. 3 at home against Montana State, the first of five consecutive home games. The Cougars will not play any regular season games in Southern California this season.

After going 8-5 last season, Washington State has many returners, led by quarterback Luke Falk. Also included are his top three in the backfield, where Williams shared time with seniors Morrow and Gerard Wicks. Last season Williams had 102 carries for 584 yards and six touchdowns on the ground. He also had 48 receptions for 342 yards and one touchdown. His 953 all-purpose yards were second on the team behind Morrow’s 1,063.

“He’s a focused guy. If you’re in a bad mood, just hang around James. He’s always in a good mood,” Leach said. “He plays hard and works hard. The most important thing is he really loves football. James is real talented. I think he’s going to get better and better and better. He got a lot of reps last year and I think he’ll get even more this year.”

Pelleur said he is glad he doesn’t have to play against Williams on Saturdays. 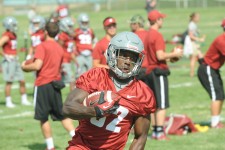 “I can tell you first hand that he is tough to tackle. He’s probably the slipperiest player we have on the team,” the senior linebacker said. “He gives me a headache and makes me look foolish sometimes. But he makes everyone better because of how hard he plays and how hard he runs. We’re definitely fortunate to have him on our team. I’m excited to see what he’s going to do this year. He’s had a great summer so far. He had a great spring as well. We’re excited to see him make moves on opponents instead of us for once.”

Morrow, who has shared playing time with Williams, said he likes many things about the former Bulldog.

“James is a character. He’s always going to make you laugh,” Morrow said. “You could have a bad day and you see James and you’ve got to smile when you see him. He brings a certain energy to our running back group. He’s a funny guy. You have to love him, especially the stuff he does on the field. Like the Oregon State play when he had two spin moves on one play and I was like ‘wow’. He’s definitely going to be a stud in this conference.”

Even though Morrow has more experience, he said he has learned from Williams.

“You just can’t tackle the kid. He’s always going to make the first guy miss,” Morrow said. “You look at the stuff he does and you’re like let me try to incorporate that into my game.”

Leach said he has liked some of the things he has seen from Williams in practice, even dating back to last season. Williams redshirted his true freshman year after tearing his anterior cruciate ligament and medial collateral ligament in his left knee as a senior at Burbank.

He (went) out there as a freshman and he’s kind of showing up some of the older defensive players,” Leach said of some practices. “They tried to hit him hard. He wasn’t even aware of it. He wasn’t aware that they were ticked off at him.”

James Williams while at Burbank High.

“I got worried about it, but he hit the club hand and he’d catch it anyway,” Leach said.

Morrow said he has seen Williams grow in so many ways in the two years he has known him.

“That redshirt year helped him a lot. He got his strength back and his confidence back,” Morrow said. “If you would have seen him when he first got up here, he was like thinking too much. He wasn’t sure. He was thinking about his knee. He came back that spring and had one of the greatest springs I’ve seen since I’ve been up here. In the summer, he’s looking fast and strong. We expect big things from him this year.”