Football is a very physical game that requires not only brute strength, but also uncommon speed.

There are two types of speed. Straightaway or vertical that wide receivers, free safeties and cornerbacks have and quick bursts that also sometimes demand a change of direction that elite running backs possess.

James Williams, the best tailback in Burbank High’s long football history, had the latter and it was on display during a standout three-year career for the Bulldogs. 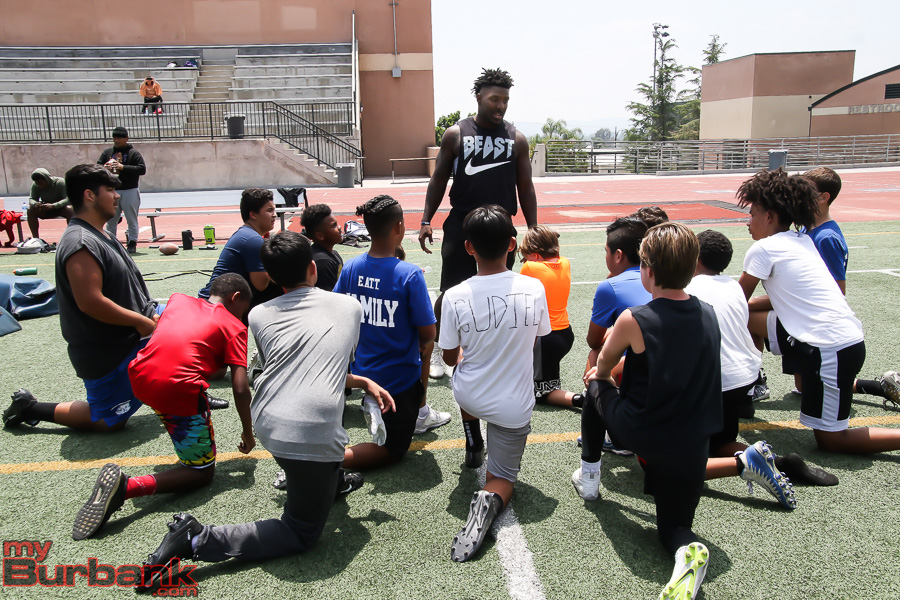 In his junior season, Williams ran for 1,469 yards in 164 carries and set a school record with 22 touchdowns.

Williams helped Burbank finish 10-3 overall and advance to the CIF Southern Section semifinals in the Southeast Division playoffs that campaign.

The ability to change direction on a dime was also evident when Williams, who redshirted as a freshman, played in the Washington State University backfield for three seasons.

For the 11 eager boys ages six through 16 at the first day of the three-day inaugural James Williams Football Camp at Kemp-Kallem Field on Tuesday, they learned how to explode off the ball and change direction.

Williams, an undrafted free agent who signed with the Kansas City Chiefs in late April, but was ultimately released, said it’s one of the most important things anyone who wants to play football can learn. 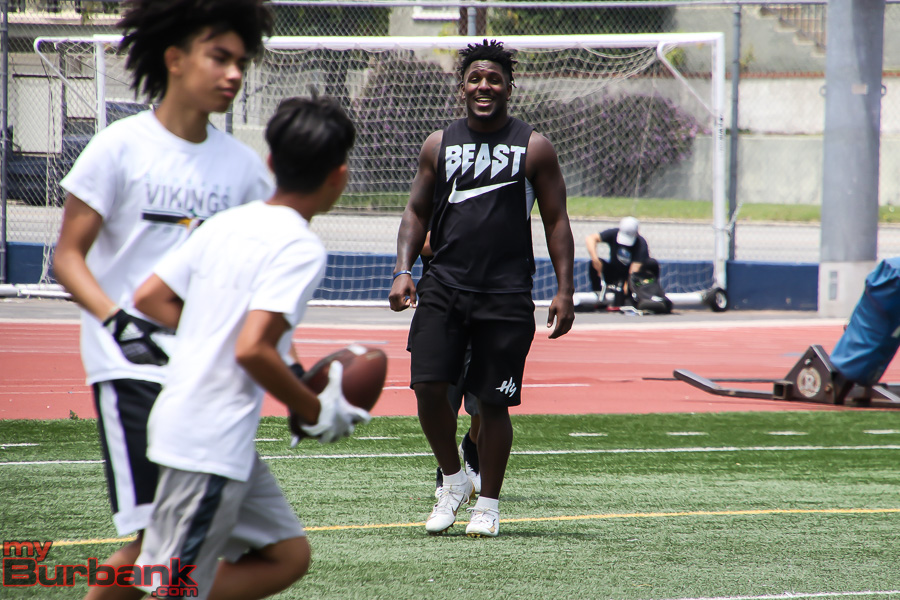 James Williams instructing young campers on the finer points of football. (Photo by Ross A. Benson)

“I went there for a month,” said Williams of the Chiefs camp. “I was hurt the first three weeks. I pulled my hamstring. The playbook was crazy. But I was getting it. Everybody had the playbook a week before I did. I made the most of it.”

Williams, who is also expecting a baby, said there’s a possibility the Arizona Cardinals or Tampa Bay Buccaneers may call, but if they don’t, he has no regrets.

“I want to keep my options open. I want to finish school. I can’t look back,” he said.

Williams, who was a two-time All-CIF Southeast Division first-team pick, said that when he went to summer football camp, he felt somewhat out of place and a little bit lost because he didn’t know what to expect. 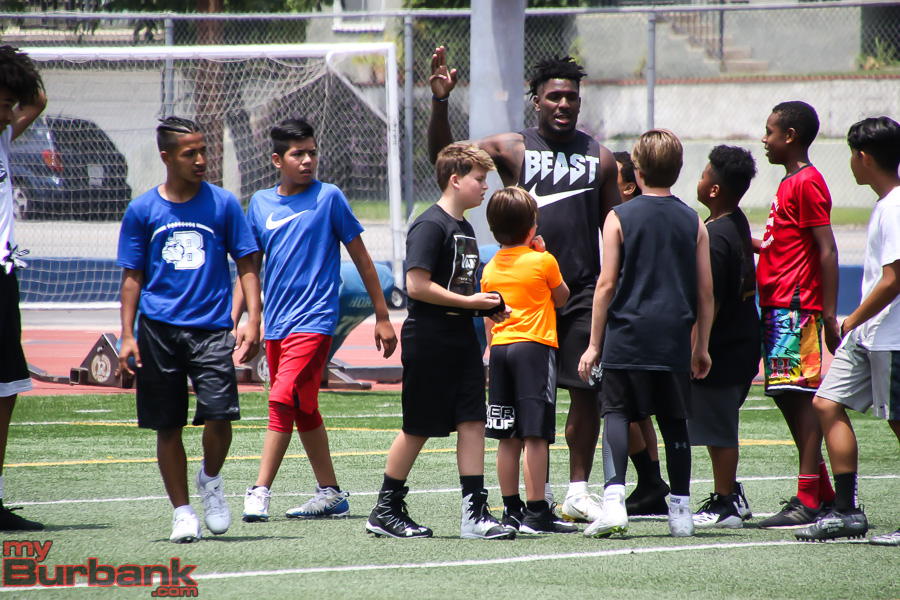 The youngsters are eager to learn about football, especially when it comes from James Williams. (Photo by Ross A. Benson)

“The reason why I wanted to do it [his camp], I was sitting back and I was thinking about when I was a camper and I didn’t know a lot of the fancy things they were doing at the Notre Dame and Crespi Camp,” Williams said. “I was in the back of the line just trying to figure out what they were doing. I want to do a condensed version of the drills that I did in college and the league.”

Burbank coach Adam Colman, who played quarterback at Burbank, helped out during the day’s activities which began at 11 a.m.

“When James reached out about doing a camp, it was an awesome opportunity for the city and the kids especially,” Colman said. “Growing up here, there’s always a couple of camps here and there, but they’re usually parks and rec camps. And now you get a guy like James, who played at the highest level and has those experiences and someone all the kids look up to.” 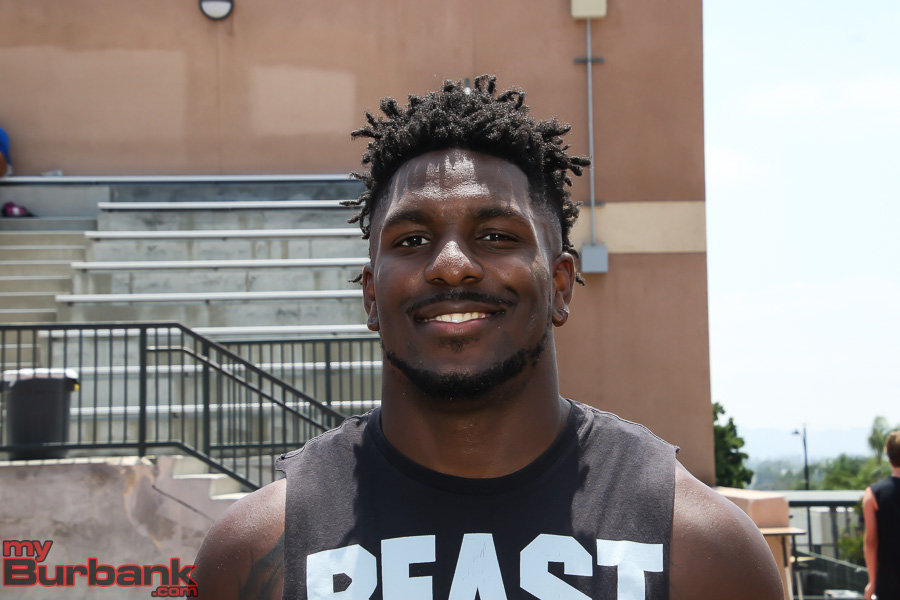 James Williams hopes to continue his dream of playing in the NFL despite being released by the Kansas City Chiefs. (Photo by Ross A. Benson)

Colman continued: “He wanted to make sure to make it happen for them. To see the guys who came up from Burbank and represent the city and being really proud of being from Burbank and going to Burbank schools,” he said. “It’s not every day you get a guy who played at the college level and the pro level and pass on their knowledge and hope it trickles down.”

The three-hour camp commenced with the boys stretching and exercising for 25 minutes.

Williams, who came to Burbank from Toledo, Ohio, finished with 3,090 all-purpose yards for the Cougars, wants to give back and hopes to make his camp and annual event.

Running drills and sprint drills were next on the agenda. Then four half-rounds were laid out on the field, one yard apart and were used for agility drills.

One of several water breaks followed before the youngsters faced their next challenge.

There were three cones set apart three yards. Williams, who ran for 1,443 yards with 17 touchdowns and tacked on 101 yards on 11 catches as a sophomore at Burbank and was tabbed the Pacific League Offensive Player of the Year, would then yell out a number which corresponded to the shortest distance, the middle distance and the longest distance.

Williams, who had 27 career touchdowns at Washington State, the fourth-most, would then change the numbers to make sure they knew which to run to.

For this drill, Williams said the key to doing it well and for maximum speed is to keep as low to the ground as possible.

The next assignment was to move between an obstacle with the football as they zig-zaged back and forth and then run toward a cone about 10 yards down the field. Again, this would help them with change of direction.

What followed next was one offensive lineman trying to hold off an oncoming defensive lineman who tried to get around his man and knock the football that was atop a tackling dummy.

The final event was a game between three receivers versus three defenders with Williams, who capped his time at Washington State with 1,583 rushing yards and 19 touchdowns along with 202 catches for 1,437 receiving yards and eight scores, dropping back and finding an open receiver. The ball moved down the field and eventually into the end zone.