Former Burroughs catcher Tyler Lewis helped bring the first league title to the Burroughs program since 1997 in 2015. He has now contributed to his college team at Whitman College in Washington reaching the NCAA DIII regionals for the first time since 1952 after winning the Northwest Conference Tournament. 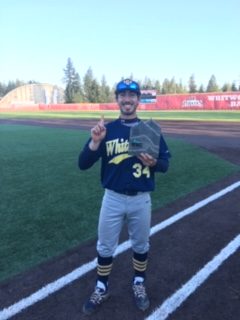 Seeded number three, the Blues defeated number two ranked Pacific, 7-1, on Friday, then number one seeded Whitworth, 5-3, on Saturday to advance to Sunday’s championship against Whitworth.

After loosing the first game 9 to 6, the Blues won the deciding game 8-7. This is the Blues’ first appearance in the Northwest Tournament and first conference title since 1952. The Blues will play in the NCAA DIII regionals May 17-19 opponents and location TBD.

Lewis, a senior, has been an instrumental part of Blues success. Recruited as a catcher and a two way player, Lewis was moved to right field this year to fill a gap in the outfield. His strong right arm gave him the nickname: “the cannon” holding opposing players from advancing to third or scoring on balls hit to right field.

Tyler came on strong in the second half of the season with a 250 average, scoring 17 runs, with 14 RBIs, 5 doubles, 3 stolen bases and 3 home runs, one a grand slam.

Tyler graduates with a BA in Biology and minor in History. He is applying to the USAF hoping to fly fighters in defense of our country. 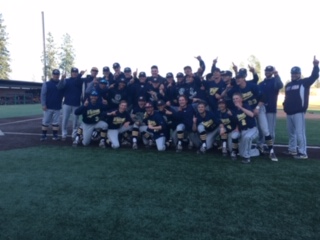