He has been nominated seven times since 2001, but it was a solo effort on a 32-minute, in-depth documentary in Africa, that finally garnered veteran broadcast journalist Peter Musurlian a Los Angeles Area Emmy.

At the August 3, 2013 awards ceremony in North Hollywood, one Emmy official commented, unofficially, that Musurlian’s Emmy might very well be the first time in 65 years that someone has won the award for an entirely “unassisted” effort. 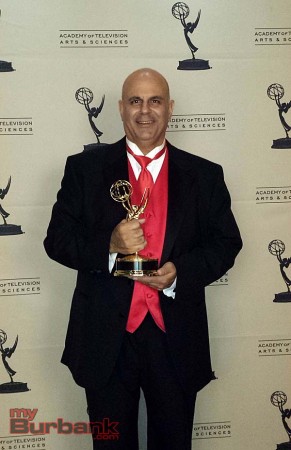 Musurlian solo-produced, shot, reported, wrote, and edited the documentary. In fact, he even shot his own reporter stand-ups while in Botswana, Africa. Musurlian did not even have a so-called in-country “fixer” to help navigate the country, as is often the case during such foreign reporting trips.

Before signing-on to his current post at The Burbank Channel in 1998, Musurlian reported for television stations in Montana, Texas, and Washington, D.C. He has shot video-in and reported-from more than 20 states, as well as the countries of: Armenia, Bosnia & Herzegovina, Botswana, Croatia, Georgia, Hungary, Mexico, Nagorno-Karabakh, Nicaragua, Panama, Poland, Romania, and Turkey

His Emmy-Award winning documentary, “Burbank’s African Sister City,” which will take you on a journey through cities, villages, shanty towns, palatial estates, and country clubs, also delves into the continent’s HIV/AIDS crisis and how how the government of Botswana dealt with the issue early, fast, and effectively.

Since its debut on The Burbank Channel, the film has been easily accessible on YouTube.