The Lion in Winter is a rip-roaring game of thrones that anchors itself to the full-throated life of a real English king, Henry II. Here be dragons who know how to breathe fire into dialogue that’s equal parts wit and menace. 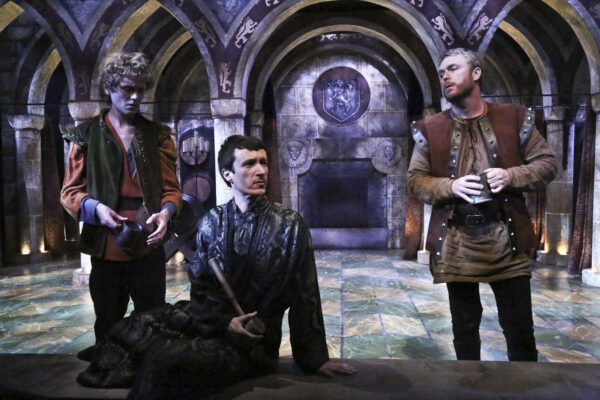 King Henry’s a piece of work. He schemes to pass his throne and his mistress to his favorite-but-feckless son. The eldest son, a ruthless warrior and the favorite of his formidable mother, can barely contain his fury. The coldly calculating middle son plans to outsmart them all.  Not so long ago, these three princes and their mother had tried, unsuccessfully, to unseat Henry by force of arms. Now comes a young French king plotting to give King Henry his comeuppance, something his father had never been able to do.

Director STEPHANIE VLAHOS, who had been a professional opera singer, understands that The Lion in Winter is the stuff of grand opera. She gives the confrontations between the characters an intensity that arias were made to capture. And if not arias, then a brilliant cast led by IAN BUCHANAN and MARIETTE HARTLEY, whose penetrating portrayals capture the clash of love and ambition. And the authentic period music is a wonderful grace note. 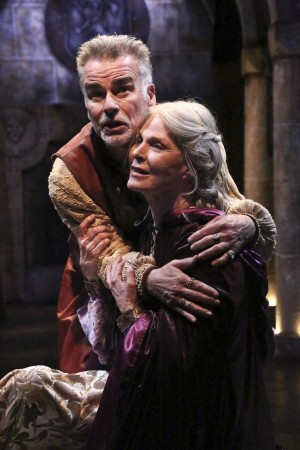 When very young, Henry II married Eleanor of Aquitaine, a commanding beauty even at 18.  They were the 12th Century power couple, whose rule extended from England to northern France. King Henry even devised decent laws and, at least by the standards of the time, ruled justly. And Queen Eleanor’s intellect shone as brilliantly as her beauty.

None of that stopped him from fooling around on her.  Or being the object of a scandal throughout Christendom by having a widely suspected, if unproven, role in the murder of the saintly Archbishop Thomas Becket. (Yes, he’s that Henry.)

If this is beginning to sound a little like a certain modern-day American political power couple, well, the more things change…

The final straw came when Henry intended to give three castles to his favorite and youngest son John at the expense of his eldest, Henry.  Eleanor and her other three sons rebelled against Henry (the Revolt of 1173-74), throwing army after army against him for 18 months, but to no avail. In the end, Henry’s family resigned themselves to his rule, with Eleanor consigned to castle arrest.

The Lion In Winter begins a decade or so after these roiling events. Eleanor (MARIETTE HARTLEY) is just arriving for Winter Court, one of the few occasions when Henry (IAN BUCHANAN) permits her a change of scene. Also arriving are the three surviving sons (the eldest had died): now-eldest Richard (BRENDAN FORD), Geoffrey (PAUL TURBIAK) and John (DOUG PLAUT).  Soon the young French king (PAUL DAVID STORY) will be joining them, and greeting his sister Alais (JUSTINE HARTLEY), who is also Henry’s mistress.

Then the fun begins, as the needle of fate swings from alliance to dalliance to betrayal and back again, within performances of unswerving quality.