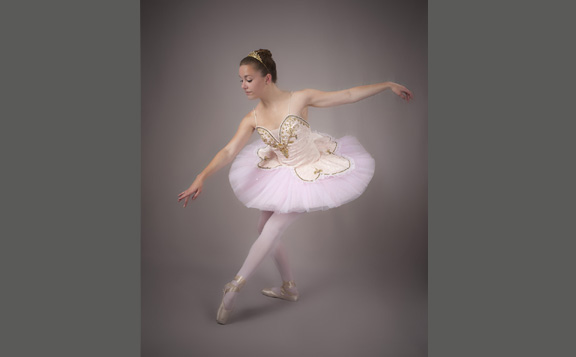 Hannah Hart of Burbank will be performing in the Pacific Ballet Dance Theatre’s “Dance in the USA” tonight.  It is the culmination of over 15 years of dancing for the young ballerina, but it is a performance she almost didn’t get to make.

Originally from Cape Cod, Massachusetts, Hannah began taking dance lessons when she was 3 years old.  She moved to Burbank with her mother and sisters in 2006, to pursue an acting career.   She heard about the Media City Dance Company (now Pacific Ballet Dance Theatre) from a friend, and began taking lessons there while attending middle school. Since then she has danced in several of their shows, including the Nutcracker, and Axis Mundi, where she was a demi-soloist.

Although dancing takes up much of her time, Hannah hasn’t neglect her school work.  In her senior year she took Honors English and Advanced Placement Biology, maintaining a 3.95 GPA.  The 18 year-old graduated from John Burroughs High School in May.  She is planning on majoring in Environmental Science in college.

Tonight’s show at the John Anson Ford Amphitheater in the Cahuenga Pass, has required many hours of practice in recent months. At one of those practice session in early June, Hannah felt something snap in her foot.  She had broken a bone.  The doctor prescribed a splint and crutches for the next six weeks.  It looked like Hannah might miss her final performance. but she is one dedicated dancer. She went to every rehearsal — on crutches.  She didn’t dance, but had to be content just watching others dance.  Not an easy thing for her to do.

“I almost started crying at that first rehearsal because I couldn’t dance,” said Hannah

Near the end of July, she got the doctor’s OK to dance again.  The rigorous schedule of rehearsals five times a week will all come to fruition at 8:30 p.m. tonight, when the curtain comes up for “Dance in the USA.”   It should be an exciting night for the young dancer, but she won’t have time to celebrate.

Early Saturday morning Hannah is leaving for college.  She and her mother, Bridget Barstow, will be driving up to San Francisco, where Hannah is enrolled as a freshman at the University of San Francisco.  Her dorm at the private college has a view of the Golden Gate Bridge.  It will be quite a change from the view she has of the Doughnut Hut on Magnolia Blvd. from her present home on Keystone St., where she lives with her mother, step-father Owen Keenan, and three younger sisters, Molly Hart, and Caroline and Bridget Keenan.

Although she is leaving behind her family, friends, and Pacific Ballet Dance Theatre, as she embarks on her college career, Hannah does plan to take some dance classes while she is in San Francisco. Ballerina, actress, environmental scientist — whichever career, or combination of careers, she chooses, I’m sure we have not heard the last from this talented young lady.

Get Out Of Town!: Grand Canyon South Rim

Burbank Library Hosts Screening And Discussion About Armenians In America