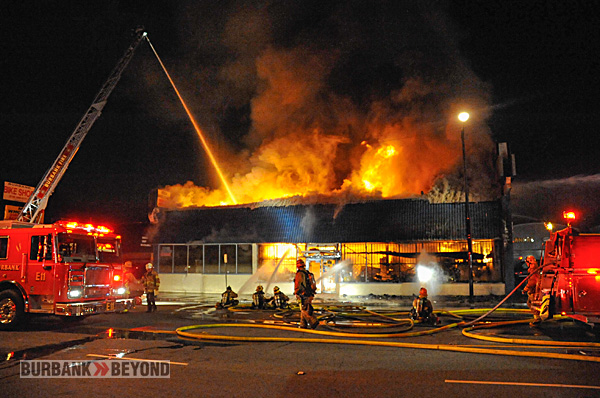 Burbank Firefighters were called at 3:28 am Friday morning, November 9, to a report of a structure fire near the corner of Victory and Manning.

Burbank’s Engine 14 was first on scene and reported seeing flames in the building and the attack began.  A second-alarm was called at 3:39 am and finally a third-alarm was asked for and dispatched at 4:06 am.  In all, close to 60 firefighters from Burbank, Glendale and Pasadena were all the scene to knock down the flames and protect the nearby businesses.

The business, Wholesale Giant, located at 4410 Victory Blvd. was a complete loss and firefighters did not achieve a knockdown of the flames until 7:07 am.

The business advertised itself as a ‘Cash and Carry’ business featuring tobacco products.  During the heat of the battle, multiple large ‘popping’ sounds came from the business as small butane and propane lighters and supplied started to explode.

Reports at the scene were that the fire possibly started in the rear of the business although Burbank Fire Investigators were on scene and had yet to start their investigation into the cause.

No injuries were reported to any firefighters.

Photo Gallery: Burbank Fire Responds for Another Mountain Rescue in the Hills Above Burbank