Madison Mayer portrayed pilgrim Sarah Goodson complete with an English accent and described what crossing the Atlantic on the Mayflower may have been like to first grade classrooms. 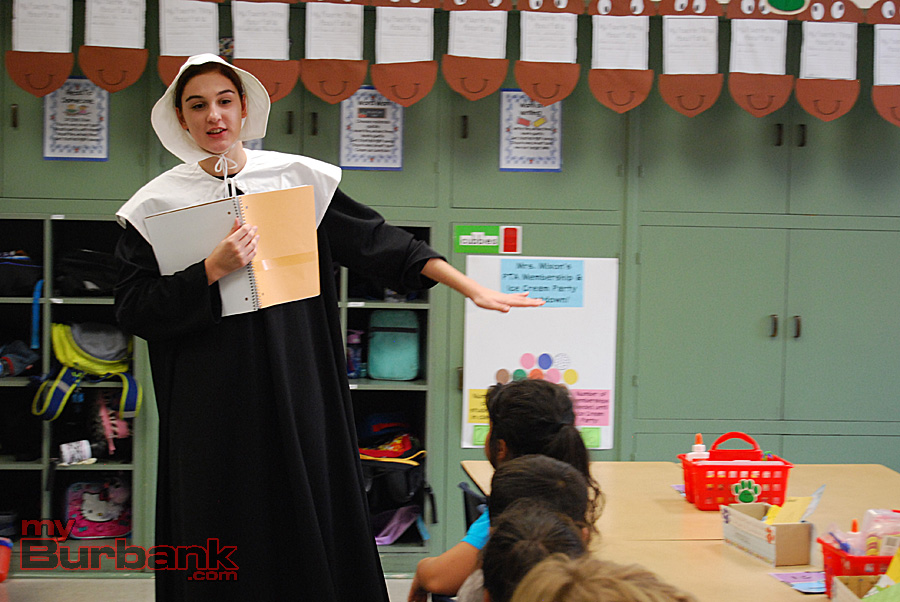 Madison Mayer describes the rocking of the Mayflower crossing the Atlantic Ocean. (Photo By Lisa Paredes)

Helen Keller’s teacher, Annie Sullivan, who was herself blind, was portrayed by Maddie Seiffert. Second-graders learned about Annie Sullivan’s desire for an education in the face of challenging odds.

“This is the second year I’ve been lucky enough to play Annie Sullivan in Time Travelers,” commented Seiffert. “I love her; she’s a stubborn woman and I feel connected with her because of it.” 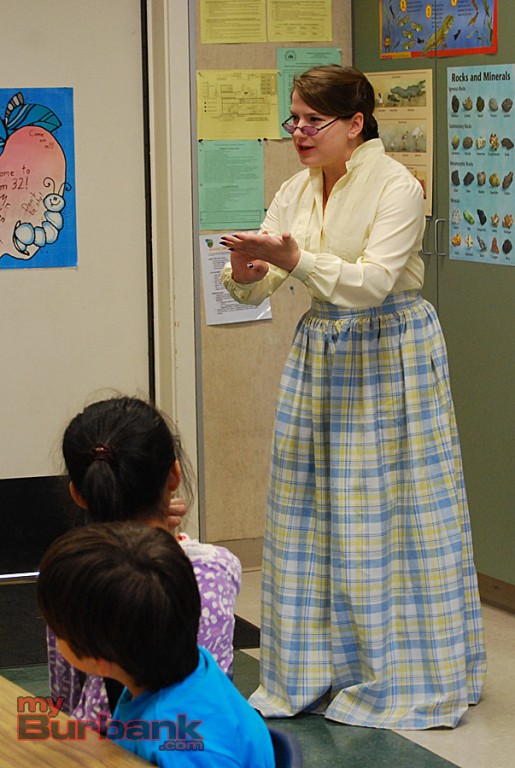 “Her story is incredible and one I first learned in Mr. Myers’ classroom while reading The Miracle Worker,” she added. “It feels like full circle, starting with reading her in his class and finally playing her.”

“It’s also remarkable because while I’m learning sign language now, so I can bring that to the classroom. I make the kids spell the alphabet and if they’re fantastic, they learn more like numbers and specific signs they want to know. It’s incredible to watch their eyes light up as their fingers spell and their love of learning just beaming from their faces. Playing Annie is one of my favorite parts of the year!”

Third-graders were visited by Sarah Weaver as Sacagewea, who talked about exploration of America on the Lewis and Clark expedition.

Griffin Dooley played the role of naturalist and preservationist John Muir. He told fourth-graders about early life in Scotland, his family’s emigration to a Wisconsin farm and his travels throughout the Sierras.

Sully Zack entered the fifth-grade classrooms complete with lantern and tricorn hat, reciting the famous Henry Longfellow poem “Midnight Ride of Paul Revere.” He, too, talked about life in his particular time period in America and some of his historical actions, engaging the kids with a little humor, too.

“Traveling through time to bring the story of Paul Revere and his Midnight Ride to the excited fifth grade students at McKinley Elementary was such an awesome experience!” Zack said. “The students were so welcoming and eager to learn.” 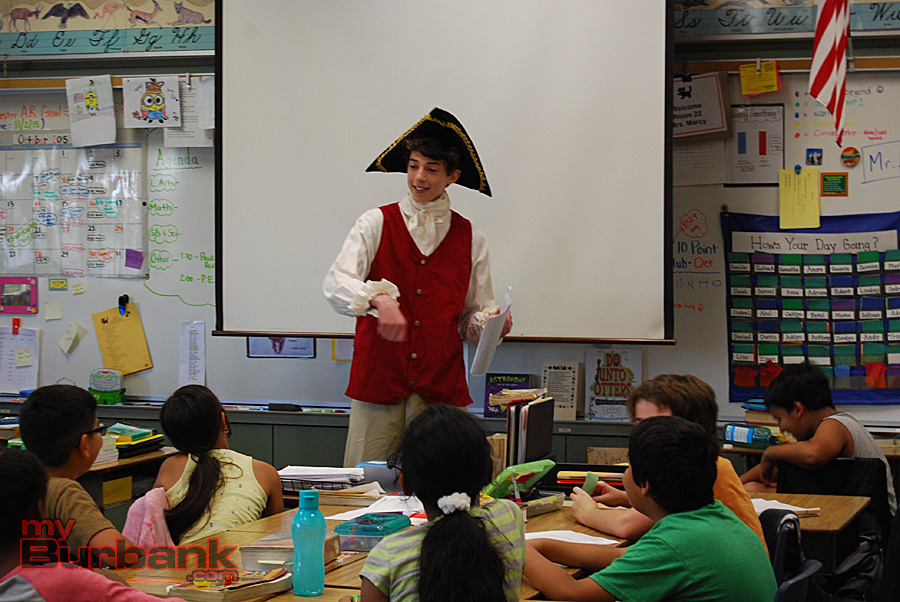 “I loved being able to teach the class about the life of Paul Revere, but my favorite part had to be answering their questions– because in doing so, I  got to test not only my historical knowledge, but also my improvisation skills,” he went on to say. “I had such a blast, and I can’t wait to do it again.” 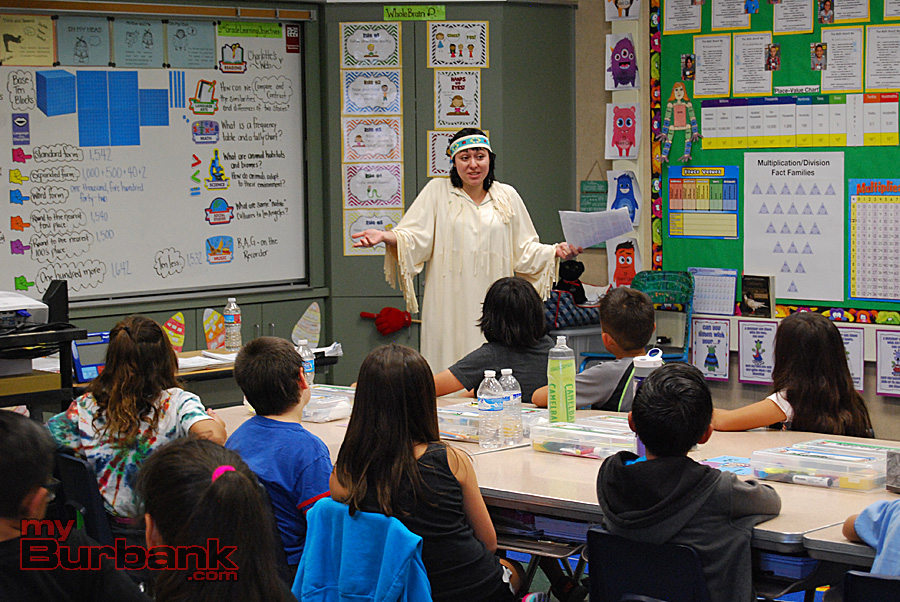 Burbank High School students went to Miller in 2014 and McKinley Elementary joined the progam that same year. JBHS and BHS students visit elementary schools in Burbank in the fall and spring, portraying 10 different characters every year.

“As co-author of the book, Time Travelers: A Living History, along with Shiela Cavalluzzi, I remember our great passion for wanting to bring more history into our children’s classrooms… thus this program was born,” commented Costanza-Moskowitz. “I cannot tell you how gratifying it is to see our ‘baby’ is still vital and thriving in elementary schools today!” 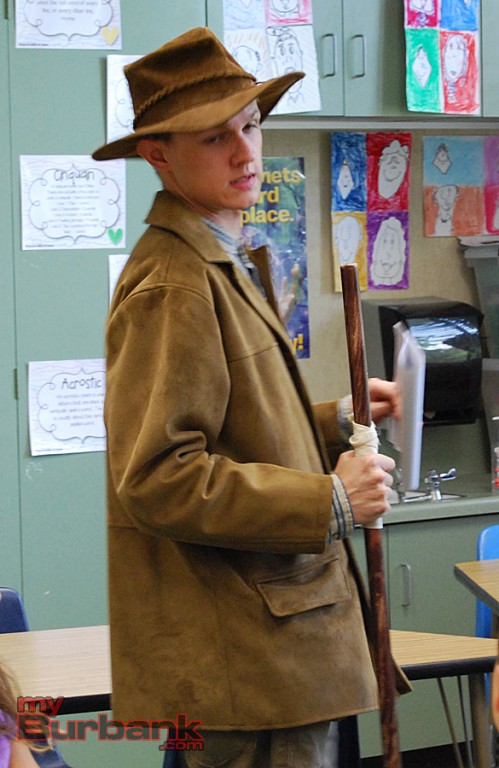 “Kids learn in so many just-being-talked-about kinds of ways, so putting a visual, auditory and tactile program like Time Travelers in front of them is or should be, a no-brainer,” she continued.

“Thank you to Lisa Dyson and the many others who came before her, in keeping Time Travelers alive and well. One might say you’re making history happen. Today!”

Support from high school drama teachers Myers and BHS’ Ted DeVirgilis is vital to the success of the program, added Dyson.

She also thanked the participating elementary school PTAs for their ongoing support of the program since its inception.

“This is wonderful opportunity for drama students to research their character(s), perform that character multiple times in front of different audiences,and be able to improvise as their Time Traveler during Q & A sessions.,” commented Dyson. “It’s excellent real world training for students who wish to continue studies in theatre arts. And its fun!”