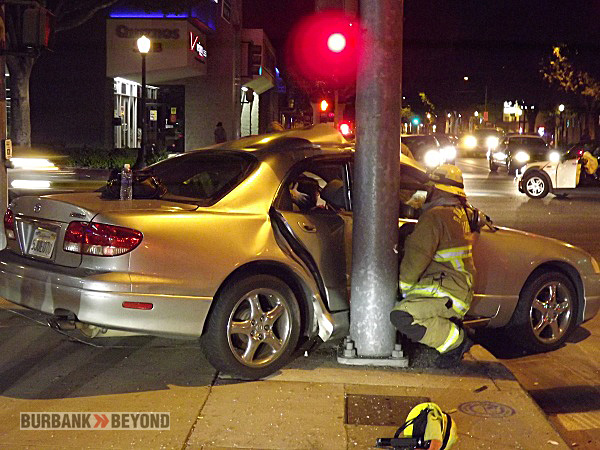 At around 10:15 p.m. Sunday night, Burbank Fire and Paramedics along with Burbank Police responded to reports of a two car traffic collision with a vehicle striking a light pole at the intersection of Hollywood Way and Magnolia Blvd.

Burbank Police were first on scene and reported one car with minor damage in the middle of the intersection, and one car up against a light pole on the northwest corner of the intersection. The vehicle that struck the pole, a beige sedan, was reported to have gone through the intersection heading westbound on Magnolia just as the light turned red, clipping the car that was turning north onto Hollywood Way off of Magnolia.  The sedan was then flung sideways and smashed into the pole on the passenger side.

The driver of the sedan had her dog on her lap during the accident but the dog was unharmed. The woman however suffered multiple injuries but refused transport by paramedics to the hospital. The driver of the other vehicle was the only occupant and was unharmed.
Multiple lanes around the intersection were blocked by the emergency crews, and westbound traffic on Magnolia was blocked at the intersection for close to an hour for the duration of the investigation and the clean-up.