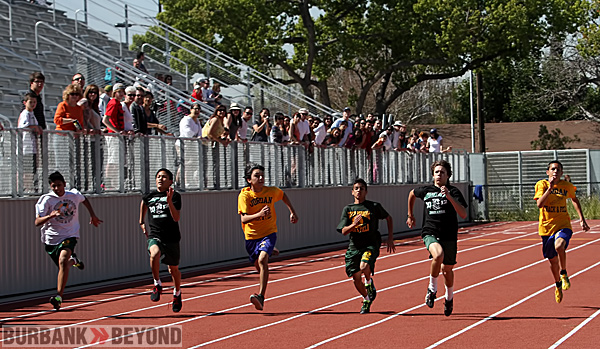 Some traditions continued as new ones were born when the three middle schools opened the gates of the new Memorial Field Saturday, March 10 for their annual Tri-School Track Meet.

John Muir Middle School won the meet for the 10th time in 11 years in the first ever sporting event at the new Memorial Field. After the event some members of the public stuck around to set foot on the surface of the new field for the first time.

The three middle schools renewed the longstanding tradition in 2001 after a hiatus since 1984, when the sites had been 7th through 9th grade and were still junior highs. Many Physical Education teachers at the middle schools are former Burbank Unified School District alumni and were thrilled to bring the event back eleven years ago.

“We have memories of it and wanted our students to have the same type of memories,” said Branko Sevic, also a PE coach at Muir.

Muir’s Khalid Taylor and Jordan’s Izzy Funes with the MVPs of the 7th grade – each set three records on the day. Taylor won the 60 M, 100 M, 4×100 relay (with John Atherton, Dillon Rosen and Joey Miller) and finished second in the hurdles. Funes won the 400M, the long jump and the 100M. She also was a part of the Cougars’ 4×400 relay team alongside Dominique Silva, Emma Bartam and Bella Nava.