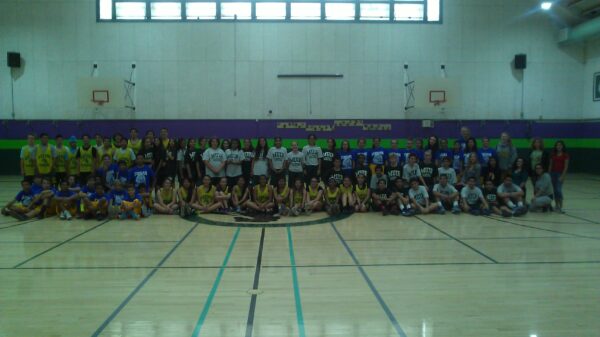 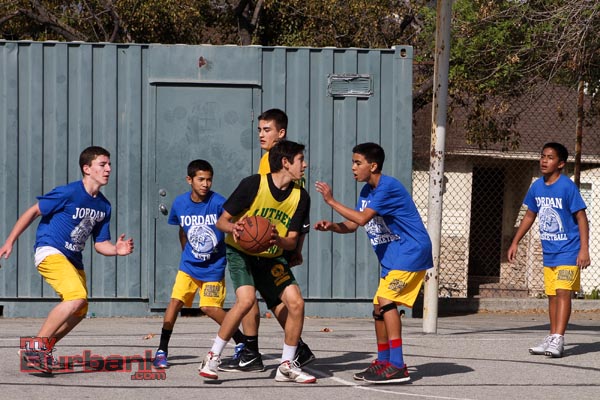 A Luther player looks for space against a Jordan defender (Photo by Ross A. Benson)

Utilizing the indoor gymnasium and outside blacktop courts, more than 100 students descended upon Muir to play basketball and forge the beginning of long-time friendships.

After many intense and grueling games of basketball, only two schools remained standing and claimed the title as “champions.”

A list of the championship winners, game recaps and a photo gallery can be found at the end of this article.

But on this day of hoops and friendly competition, the real winner was the city of Burbank. This event featured students who were given the opportunity to participate based upon good grades and good character. 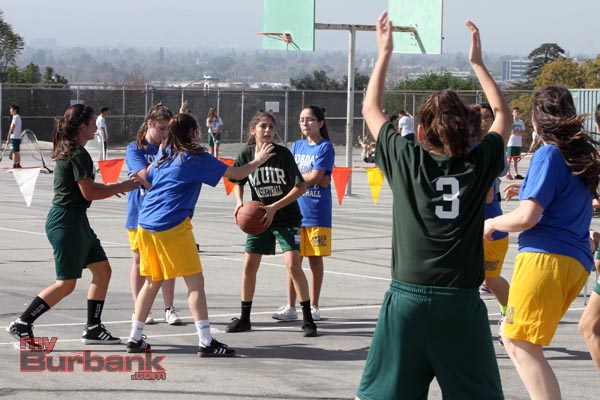 Muir battles Jordan in this matchup (Photo by Ross A. Benson)

In addition, many of the districts best physical education teachers were in attendance to supervise, organize and enjoy the future of Burbank High and Burroughs High best student-athletes.

“This is one of my favorite events. Today you get to see the stars of tomorrow,” Muir coach and event coordinator Doug Nicol said. “It gives me a chance to see all the kids from all the schools.

“For me, it’s about bringing the kids together. It’s about the community. Letting them have lunch together and play together and competing against each other. It’s a great opportunity for all our kids and schools.”

Nicol and his co-coordinator Branko Sevic did an outstanding job of bringing the schools together and play in a well-organized and disciplined manner. 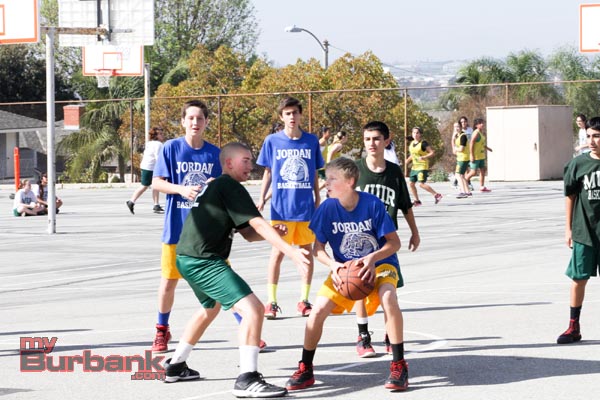 Jordan player gets pressured by Muir (Photo by Ross A. Benson)

Jordan physical education teacher and Burbank High boys basketball coach Jerry DeLaurie and Robyn Anders, Assistant Principal at Luther Burbank, were there and enjoyed every minute of it.

“What I like about this event is it gives the kids the chance to play against each other without an audience, without parents, and coaches to some degree,” Anders explained. “It’s structured in a way where they call their own fouls and learn sportsmanship with each other. As eighth graders, they are meeting some of their future teammates. They make connections right away.”

“I think it’s great fellowship. They get the chance to go out there and play. Getting to know each other and developing camaraderie,” DeLaurie said. “It’s a really fun day and these kids have really earned it. They are good students and it’s a great joy for them to come out here having a lot of fun.”

DeLaurie added it’s a chance for the coaches to witness personal growth in the students because of how the event is structured. The teams play without coaches and officials which allows them to work and interact amongst each other. The players subbed freely and called their own fouls.

“Every day in my class we emphasize sportsmanship, displaying good character and working with each other cooperatively,” DeLaurie said. “As an educator, we teach them to be good sports. This is a testament to all the teachers how we are teaching our classes and our sports.” 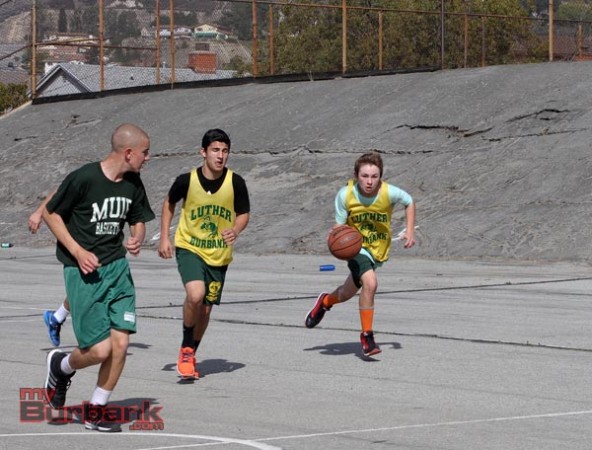 Luther pushes the ball up the court against Muir (Photo by Ross A. Benson)

Each school was represented by two teams in both the boys and girls divisions. Each team played eight games before lunch with the semifinals and finals held after the much-needed break for the 100-plus hungry 8th graders.

When the day had ended, the interaction of all the students is what caught the attention and mattered most for everyone. Here are thoughts shared by some of the event’s participants:

“I wasn’t expecting it to be this hard playing all these games. I thought our team would do better but we made it to the playoffs so it’s good. It’s a nice experience seeing all the other schools and how good they are in basketball.”

“We got to meet all the kids and mingle together. It’s pretty fun. Our team works together well.” 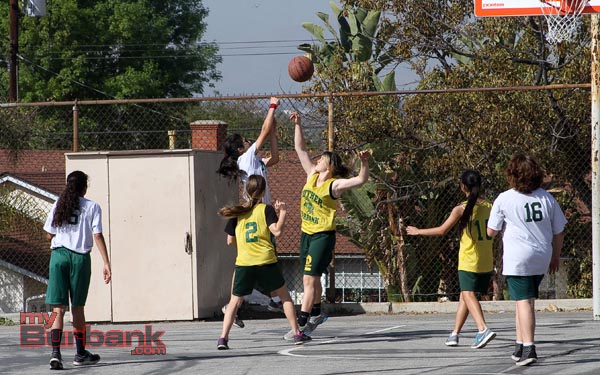 A Muir player takes a shot against Luther (Photo by Ross A. Benson)

“It’s going good. We miss a day of school. But I think it’s pretty fun interacting with other schools and getting to meet new people. And you get to see other competition for high school next year.”

“You get to meet the competition and see who you might play in high school.”

“My favorite part was playing against the other schools and seeing how they play. It’s been a pretty fun day. But it’s only a game and not anything too big.” 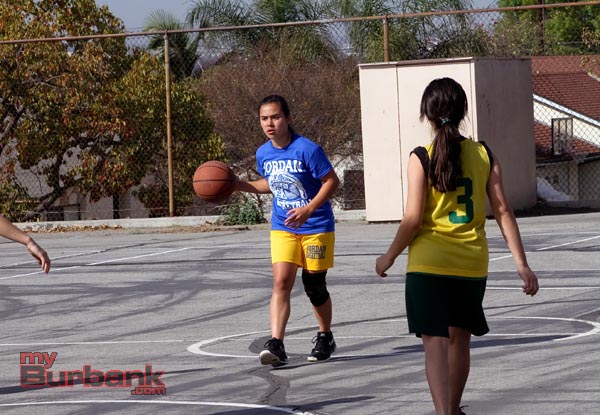 Jordan player dribbles up court (Photo by Ross A. Benson)

The #2 seed Muir team was beaten by the #3 seed Luther team, 12-9. It was a close game that was not decided until the last minute. 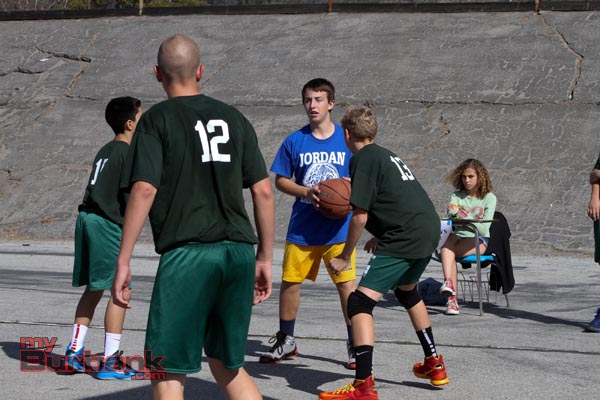 A game that was close for the first five minutes. Muir (the #1 seed) went on a 6-0 run at the 5-minute mark to gain a lead it would never lose. Jordan (#4 seed) played hard.

The game was close in the first 10 minutes, but then the #1 seed Mustangs went on a 7-0 run, highlighted by a Max Meltzer scoop shot, and Alan Edgar driving layup that gave Muir the lead for good. Both teams worked hard, but the championship went to Muir, their first boys championship for them in three years. 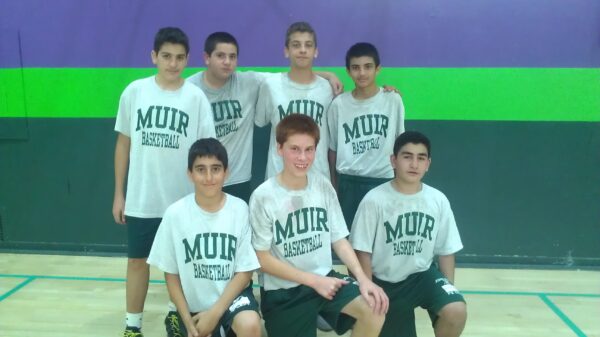 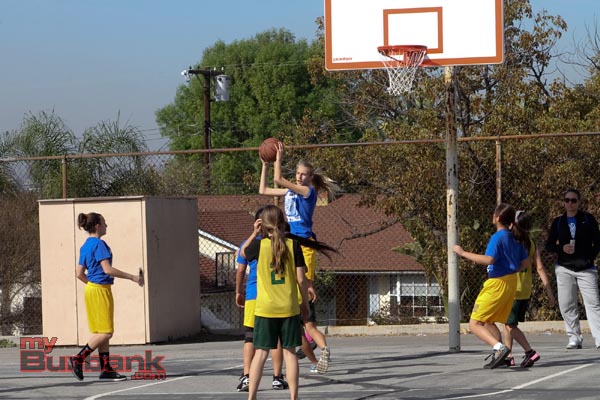 A Jordan girl reaches high for the rebound vs. Luther (Photo by Ross A. Benson)

Jordan (#1 seed) dominated the game. They scored the first eight points and never looked back and won in convincing fashion against a very talented Luther (#4 seed) team.

The game was close for the first 10 minutes and then Luther (#2 seed) pulled away for the victory. Great team play and good rebounding on the part of Luther gained them the win setting up a championship meeting between the top two seeds.

Jordan was undefeated and looked vulnerable as the Luther team held an early 7-6 lead. However, the Cougars, with great team play, were able to pull away in the final five minutes as they went on an 8-0 run to close the game and wore out the Yellow Jackets to gain the victory.

They finished as the only undefeated team (10-0) in the entire tournament and gained Jordan its first girls championship since 2011.

A Muir player takes a shot against Luther (Photo by Ross A. Benson)

Luther pushes the ball up the court against Muir (Photo by Ross A. Benson)

Jordan player dribbles up court (Photo by Ross A. Benson)

Muir battles Jordan in this matchup (Photo by Ross A. Benson)

A Luther player looks for space against a Jordan defender (Photo by Ross A. Benson)

Jordan player gets pressured by Muir (Photo by Ross A. Benson)

A Jordan girl reaches high for the rebound vs. Luther (Photo by Ross A. Benson)