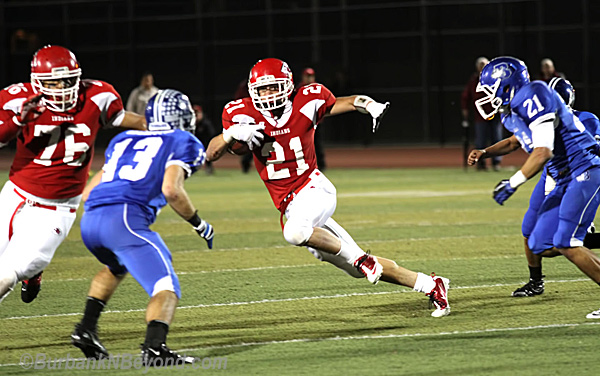 Zander Anding turns on the jets during the Indians 34-7 victory over Burbank. The Indians will now take on Los Altos in the first round of the CIF Playoffs. (Photo By Ross A. Benson)

The CIF Southern Section announced playoff brackets for Friday, November 18’s opening playoff round. Burroughs High drew a tough opponent in Los Altos High. Although the Conquerors finished fourth in the Hacienda League this past season, they were relevant in an always tough league which features West Covina, Bonita, and Diamond Ranch.

Los Altos is a program on the upswing thanks to first year coach Dale Ziola. Last season the team was winless, this year it finished 7-3 in the regular season and was 3-3 in league play under Ziola. The Conquerors are ranked sixth in the Southern Section Division Southeast VII rankings. The Indians (6-4 overall and 6-1 in Pacific League play) are ranked eighth in the same section.

The Conquerors feature running back Justin Fa’aola and quarterback Shane Virnala. Fa’aola ran for 267 yards and three touchdowns in Los Altos 52-35 win over Diamond Bar on November 11. He has 1181 yards on the season to go with 11 TDs.

Virnala has completed 60% of his passes for 1484 yards on the season. He has also thrown for 13 TDs and run for six. Los Altos averaged over 30 points per game this season as an offense – which like the rest of the Hacienda League features a ground and pound style of offense.

“They are a lot like us, they run the ball a lot and they’ve got a good back, actually a couple of good backs,” Burroughs Coach Keith Knoop said. “It is a running league, their team is not overly big and physical but they are a scrappy bunch.”

It was a goal for the Conquerors to make the postseason this year after a 0-10 finish last season. It will be interesting to see how they match-up with a Burroughs team whose goal was to not only when the Pacific League for a third straight year, but to make its mark in the postseason as well.

“That’s the goal,” said Knoop, in his 15th year as the Indians’ head coach. “We’ve got to turn up the heat and prepare for a fist fight (in the postseason), but with a group of experienced players like we have, we understand that.”

Last season, the Indians won their first playoff game since 1987 with a first round win at El Rancho.

Burroughs defeated Burbank 34-7 on November 11. It is led by start running back Zander Anding who rushed for 349 yards in the game and who finished with 2,453 yards on the season. He will get his touches and he will get his yards against Los Altos, who surrendered almost 23 points per game this season.

The game will be played at Glendale High School as construction continues on Memorial Field at Burroughs High. The winner will draw the winner of the Mayfair/La Serna first round match-up. Mayfair eliminated the Indians from last year’s playoffs.