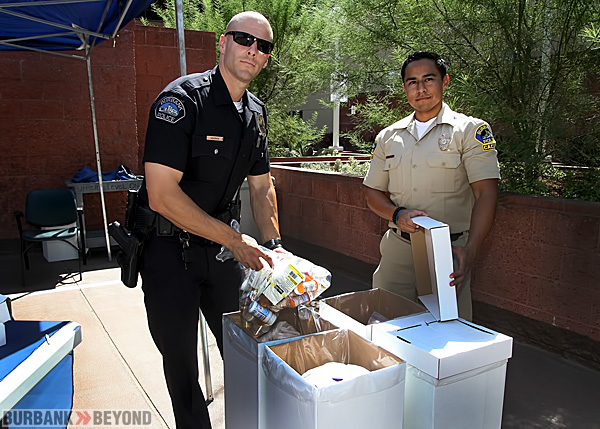 Burbank Police Officer Joshua Kendrick along with Police Cadet Jonathan Montalban package up some of the bags, boxes, and containers of drugs turned in Saturday.

The Burbank Police Department  once again partnered with the federal Drug Enforcement Administration to give the public an opportunity to safely turn in any old or unwanted prescription drugs with National Prescription Drug Take-Back Day.

The Drop-Off was held Saturday, September 29, between 10 a.m. and 2 p.m. in the parking lot at the rear of the Burbank Police Station, 200 N. Third St.  Members of the public drove into the lot from the entrance on Palm Ave. between Third St. and Glenoaks Blvd.  According to Burbank Police, no questions were asked.

In the last Drug Take-Back Day held in April across the country, 276 tons of unwanted or expired medications were turned in. The drugs are safely and properly disposed of.  It is reported that prescription drugs left unused in homes are high susceptible to diversion, misuse, and abuse.   Drugs should not be flushed down the toilet, or throw in the trash where they end up in landfills. 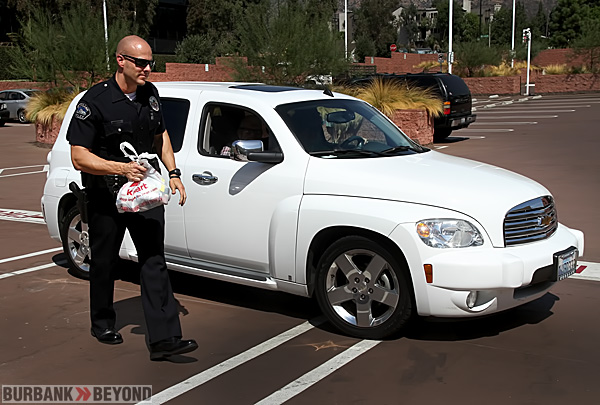 Burbank Police Officer Joshua Kendrick receives one bags of hundreds turned in on Saturday during Burbank PD and the DEA’s Drug Take Back event. (Photo by Ross A. Benson)