Unorganized Crime is a great ride that ramps up the tension then hurtles us through one plot twist and razor-sharp line after the other. Critically acclaimed actors CHAZZ PALMINTERI and ELIZABETH RODRIGUEZ head a very strong cast that delivers 70 minutes of noir heaven. 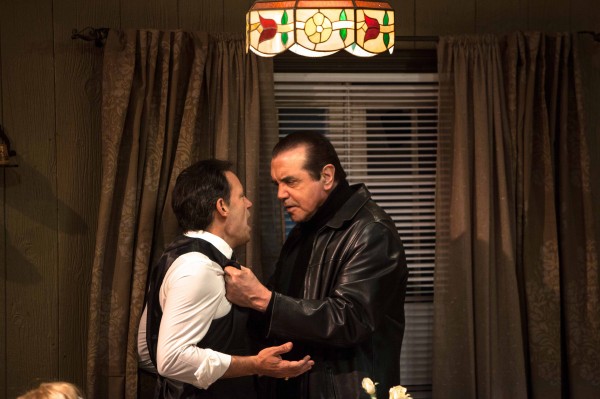 Kenny D’Aquila and Chazz Palminteri star in the World Premiere play “UNORGANIZED CRIME,” written by Kenny D’Aquia and directed by David Fofi and now playing at the Elephant Theatre in Hollywood. ( Daniel Reichert)

Gino’s brother Sal (Academy Award-nominee CHAZZ PALMINTERI) turns up in Gino’s apartment. Unlike Gino, Sal’s a made man many times over, and projects menace as casually as a lion shaking dew from its mane.  Sal brings Gino sad news, but also a second chance to redeem himself in the eyes of the family. Haakim barges in, eagerly expecting Rosie to relieve his distress over her lack of rent money. 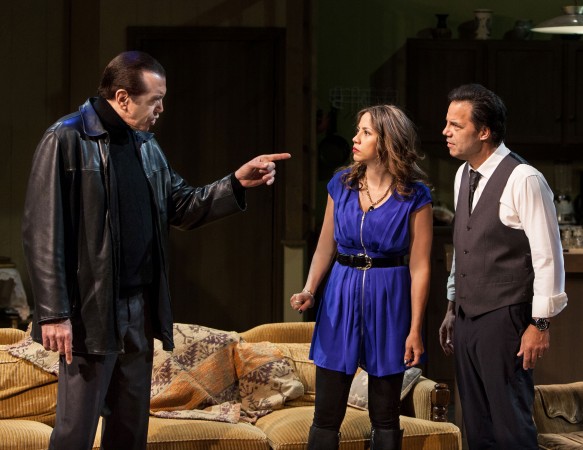 Welcome to a world where males are brutes or wimps, with men nowhere in sight, and women must navigate among them as best they can. It’s a world brought to throat-gripping reality by Playwright KENNY D’AQUILA (who’s also Gino) and the A-list acting.

I also took Unorganized Crime to be a cautionary tale, in the tradition of The Godfather I and The Godfather II. See what happens when the brave are not taught to be tender hearted, and the tender hearted are not taught to be brave. Would-be industrial titans are crime lords instead, and would-be caregivers stand by fecklessly as their loved ones are abused. In the world beyond the stage, see the lines being blurred by crooked CEOs and by hand wringers that never get around to being hands on.

Unorganized Crime runs through Saturday, May 31 at the Elephant Theatre, 1076 N. Lillian Way (at Santa Monica, one block west of Vine) in Hollywood. Performances are Thursdays, Fridays and Saturdays at 8 p.m. and Sundays at 7 p.m.  Ticket prices are $34.99 for all Performances.  Tickets may be purchased online by visiting www.tix.com or by calling (800) 595-4849.  For further information on the play, please visit www.unorganizedcrimetheplay.com.