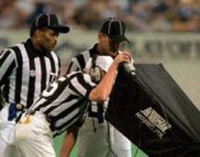 In NFL football it is almost impossible for a non-quarterback to win the league’s Most Valuable Player award. In NBA basketball league honors often go to the players who were snubbed the year before, not necessarily the most deserving players. And in the MLB, the MVP selection is  often a subject of controversy (See Braun, Ryan over Kemp, Matt).

Additionally, with fan input for All-Star selections in all three sports, these honors are popularity contests every bit as much as student government elections and prom court nominations are.

One of the highest honors that can be bestowed upon a high school athlete is being selected a member of their All-League team from their respective league. Unfortunately, like the pro sports they mirror, high school All-League teams are often as much about who was not named, as who was named.

So was the case earlier this month, when Pacific League coaches held their annual All-League Selection Night as Burbank High — who had 10 wins in 14 league games — saw only two players make the first team in “no-brainers” Dylan Mersola and Daniel Starkand.

Ricky Perez and Paul Frias made the second team leaving at least three deserving players in Harrison Hernandez, Andrew Hernandez and Ian McKinnon off the teams entirely. In McKinnon’s case he was selected as the team’s honorable mention candidate which is a spot reserved for a coach’s selected player, usually the guy from his squad that got snubbed.

“The process is a joke sometimes the way coaches go about it,” said Burbank’s coach Bob Hart. “It is always a really frustrating process because not everyone is honest about things.”

Hart left his meeting Monday, May 14 as soon as the voting was concluded, in protest of the way the meeting had been conducted. In the old days when we coached against each other, Hart and I would car pool together. We would spend the car ride home complaining about the process.

All-League meetings are the same in every league. There is the coach who attempts to bully others based on his success in the league over a period years. In the old Foothill League this person was Bud Murray, in the Pacific League it is Phil Torres. Torres’ squad won the league this year, breaking a run of three straight for Arcadia, and deservingly his team had many players on the first team.

But the truth is, even in years where his team is not as successful, Torres usually has his way at the All-League meetings by pushing around coaches and manipulating the deck in his players’ favor. To an extent it is his job as a coach, but this league has made it easy on him for years — largely by allowing CV to host the league meeting every single year. Most leagues rotate who hosts their meetings, but for reasons that cannot be explained CV’s Athletic Department hosts the meeting each year. Let’s face it, it is hard to be rude to a host.

Other characters at All-League meetings include the guy who is overly prepared and gives the other coaches stats atop stats. Remember the line in the Tom Selleck movie, “Mr. Baseball?” “I led the American League in doubles in the month of August!” In my coaching days this person was me. Sometimes that can work in one’s favor, sometimes it can work against you.

There is also the coach who comes with no stats. Usually in the Pacific League this person is Muir’s coach, a program down on talent for decades. These coaches promote one guy using clichés like, “He’s every coaches dream,” and often end-up with someone on the list based on the sympathy vote more than the numbers.

Most unethical is the coach, who in an effort to see his guy make the cut, calculates how to make it happen. Coaches are suppose to give the most points to the most deserving player. If there are 11 spots on the first team, he would give 11 points to the most deserving player. His last vote would be a one. These coaches will give a strong player fewer points and a weaker player more points in the hopes his guy will make the cut. This defeats the integrity of the process altogether.

“The experience was an eye-opener,” says first year Burroughs coach, Kiel Holmes. Although Holmes was happy with his selections — Brian Pozos (1st team), Chris Peale (2nd team) and Luis Pereya (2nd team) — he said it was obvious to see some coaches ulterior motives.

“Some coaches really spun the numbers in their favor, some presented stats that the rest of the table knew were questionable, I just tried to take it all in and take mental notes in my first experience with it,” Holmes said.

Voting should be based on three things. 1) What the player’s numbers look like overall in comparison to the competition, 2) how that player did against one’s team head-to-head, 3) How that player conducted themselves on and off the field.

Burroughs had at least one player this year deserving of a higher honor, but since he was disciplined in three of 14 league games it was impossible for Holmes to push that player in good faith. Item number three is every bit as important as item one and two.

I can only speak firsthand about my experiences as ten All-League baseball meetings during my coaching career, but my colleagues who coach other sports share that it is the same in every sport and every league in the area.

If we as adults don’t do the thing that is proper instead of the popular, how can we expect our athletes to? Remember this Pacific League coaches if you are one of eight with voting power in an All-League meeting someday.