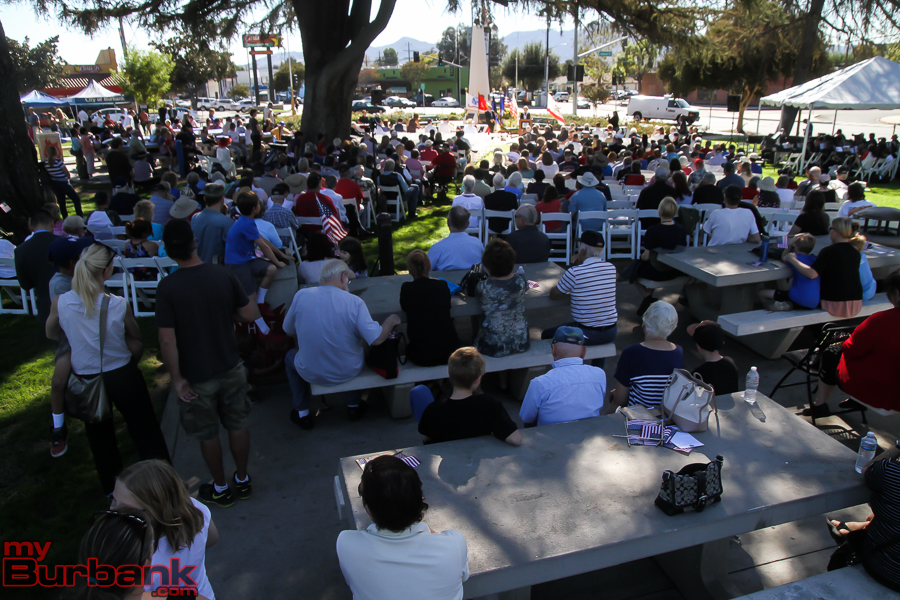 The Burbank Veterans Committee  who for the paste 28 years held Ceremonies  at the McCambridge Park War Memorial honoring the Veterans who have served our Country.

This years program was one which will be remembered by all who attended. The guest speaker this year was Chief Warrant Officer 5 (RET) United States Army Gary Linfoot.  Linfoot who was assigned to the Night Stalker Pilot Program from the Special Operations Aviation  Unit. Members of this unit are known as some of the best Aviators in the Country.

Chief Warrant Officer Linfoot crashed during his 19th combat tour in Iraq. He survived the catastrophic mechanical falure. He was paralyzed from the waist down from a spinal cord injury. He said he was motivated to serve following the sacrifices his relatives made.

“”Veterans have always been my personal heroes and people that I’ve always looked up to,” he said. “They played a great part in forming me as a young man.”

Linfoot gets around today wearing a exoskeleton that has been specially fitted for him. His wife Marci is his caregiver and Chief Officer now.

Also mentioned in yesterday’s ceremony was Milo Sanchez who is 95 and a life long Burbank resident, he flew 50 missions as a tail gunner in a P-24. Milo who served in World Wat II and he currently has a grandson serving in Iraq. Sanchez retired after working for Lochkeed for 35 years.

Here are some images from the ceremonies at the war memorial: