Vehicular traffic will remain open on Victory Boulevard as workers repave the roadway with rubberized asphalt, however, lane closures and detours will be in effect during certain phases of the project which will take place during the daytime and sometimes at night.

Notices have been distributed to nearby residents and business owners, but those driving from outside the area are warned to expect delays at street entrances and driveways during construction. Drivers on Olive Avenue and Magnolia Boulevard are advised to take alternate routes during the project.

The contractor will post “NO PARKING” signs 48 hours in advance of commencing work in areas where parking restrictions will be necessary. 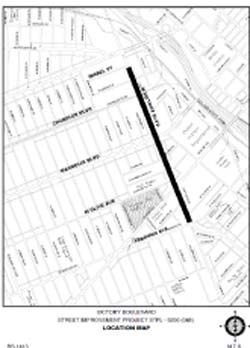