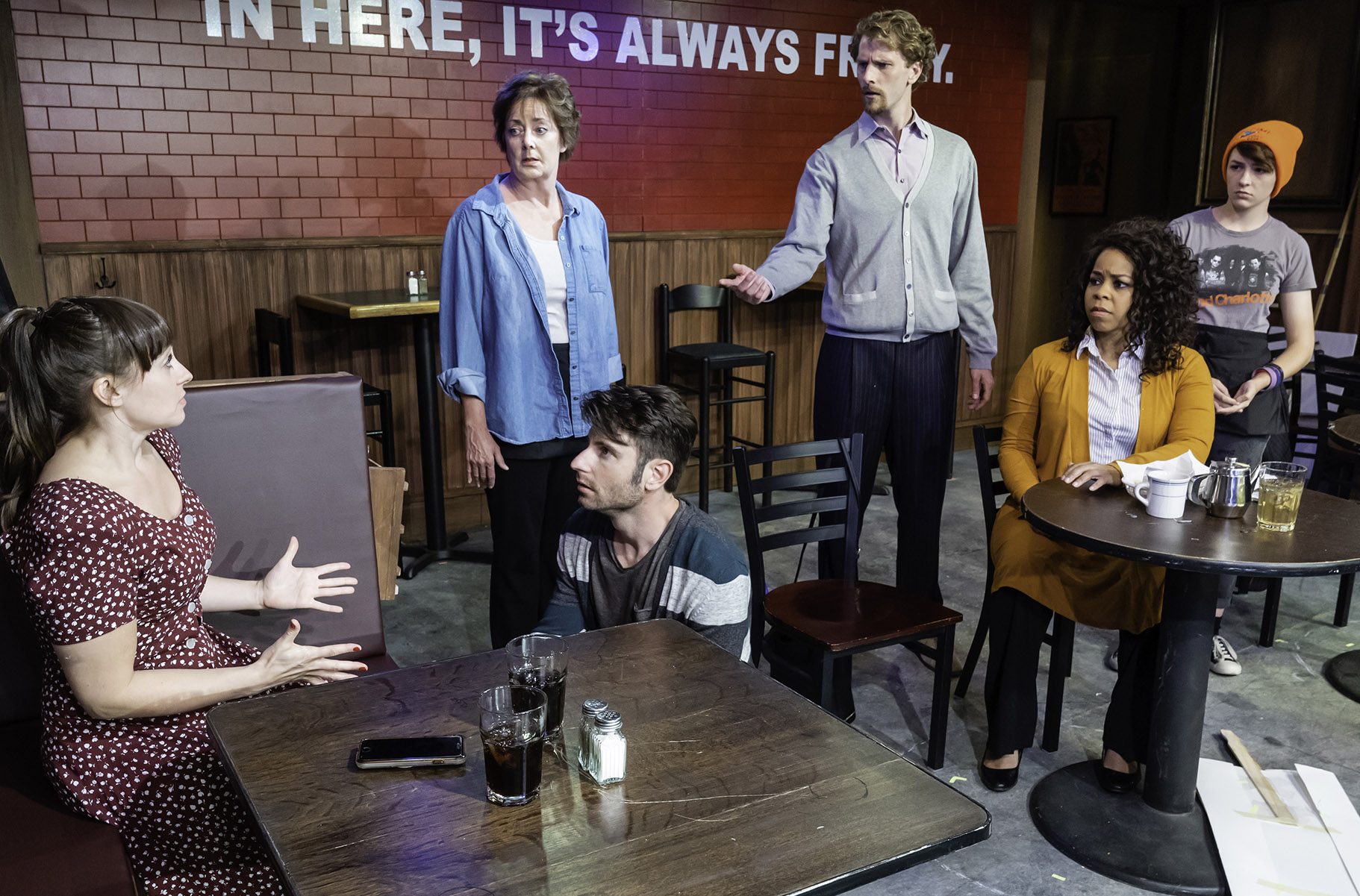 Hold on to your seats. Playwright Judith Leora will blow you away with her west coast premiere of Elijah, a gripping one-act drama with a cast that fully lives up to her Category 5 script.

The set is a nice recreation of TGIF Fridays (Victory Theatre always does a great job with the sets), the sort of room that usually has enough privacy for that breaking-up speech but enough people around to ensure that things don’t get too ugly.  On the wall hangs a picture of two hands with long, bright red fingernails that cradle a cornucopia of fruits and vegetables.

“Nature is red in tooth and claw,” indeed, and is displaying a Texas-sized tantrum, flooding the interstates with torrential tears and scattering trees and roof tops across the fruitless plains.  And so to avoid getting drowned or caught up in the whirlwinds of hurricane Elijah, diverse strangers are seeking shelter on high ground, in the only restaurant still open for business.  Sort of.  Given the circumstances, a number of items are missing from the menu.

Oh, and something’s about to take place at the town’s prison, undeterred by neither rain nor, etc: a serial rapist/killer of young girls is scheduled to fry in the electric chair.

Let’s meet the characters:  Dawn (played by Molly Gray) is ostensibly on a romantic road trip to Galveston.  So why did she head for an obscure Texas town hour from the Gulf Coast?  Her boyfriend Greg (Jordan Wall) is trying to be cool with all this in a “that’s OK, honey” sort of way, but you know he really isn’t.

Tim (Jesse Merrill) is a gay, atheist New York lawyer out of his element, low on blood sugar and very hangry; Patience (Elle Vernee) is a straight, deeply Christian local.  You know they’re going to clash, but the fault lines between them are not as facile as you might expect.

Rounding out the cast is troubled teen Ashley (Mackenzie Rickaby) who’s the only server and doing the job for the first time, having been drafted by her aunt and guardian Lori (Kathleen Bailey,) a no-nonsense lesbian who runs the joint.

And so commences a hurricane of a different sort, one that rips off masks and makes every dysfunction flap in the breeze for all to see, making the need for mutual respect and forbearance greater than ever… and harder than ever.

A lesser playwright might have focused on race or sexual orientation as the source of conflict.  Instead, she focuses on what people fundamentally value, and why, while being true to her characters and placating the gods of comedy.  And Leora lets both sides make their point.

The program notes state that Elijah  “is the story of a young woman’s struggle to overcome her past and move on.”   And that is true enough. But she is also the catalyst for a particularly profound lesson:  Boxer Jim Tyson famously quipped, “Everybody has a plan until they get punched in the face.”  By the end of the play, we might also say, “Everybody thinks they have the answers until experience punches them in their gut feelings.”

It is to the cast’s—and to director Maria Gobetti’s–great credit that by the end of the play, with the winds temporarily abated, we sense that their characters succeeded in hearing that “still, small voice.”

Elijah runs Fridays and Saturdays at 8 p.m. and Sundays at 4 p.m. through December 15. Tickets range from $28 to $40.  Senior and group rates are available. The Victory Theatre Center is located at 3326 W. Victory Blvd. in Burbank, CA 91505.  For information and to purchase tickets, call 818-841-5421 or go to www.thecictorythreatrecenter.org.

BTW, another of Leora’s plays that deserve to have their day in New York is Show Pony, which was deservedly the LA Times Critic’s Choice.  When it premiered at Victory Theatre, the mother-in-law’s-tongue potted plant was one of the visual elements on the Mad Men era stage.  The lacerating wit and humor of the play lived up to the symbol.

Show Pony concerns five racially diverse women who are trying to break through the proverbial glass ceiling.  On the surface, it’s a 2.0 version of 9-to-5; there’s even a homage element where the boss is confined to a hotel room, though not by force. In this play as well, Leora goes deeper than the #ME TOO garment rending on the mainstream media. In fact, the boss is, at least by recent standards, progressive.  But beyond—and often behind—unconscious racism and sexism is class prejudice.

At the Victory Theatre, the key character was a striking white woman, and one with height privilege to boot, who grew up in Hicksville (a classist term, we should note.)  So her formative years weren’t in the right neighborhood, with the right sort of folks, to learn the secret handshakes and passwords to get her admitted through the gate to the upper-middle-class communities of success.  (Like Clarice Starling, she needed a knowledgeable mentor, though hopefully one not prone to cannibalism.)  Among other issues, Show Pony explores whether the sisterhood is willing to offer this kind of guidance, and does so with great wit and insight.