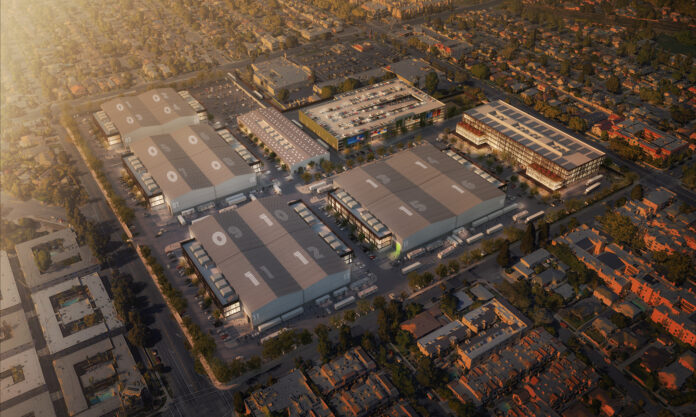 On Monday, Oct. 18, Warner Bros. and Worthe Real Estate Group announced a deal had been made for the company to lease back a studio redevelopment of the Warner Bros. Ranch Lot located in Burbank.

The project will see numerous new additions being brought to the site from Worthe Real Estate, such as a 320,000-square-foot office complex, 16 new soundstages with additional production space, a multi-level parking structure, mill space, and a commissary. The location is to be owned by Worthe in partnership with San Francisco-based investment firm Stockbridge. In a release from Monday, Worthe Real Estate Group President Jeff Worthe detailed his enthusiasm in overseeing the nationally-significant redevelopment.

“Worthe and Stockbridge are excited to continue to expand our relationship with Warner Bros.,” Worthe said. “This new development, at 926,000 square feet including 16 soundstages, will be the largest studio development in the country when the project begins development next year.”

Also in the release, Warner Bros. President of Worldwide Studio Operations Jeff Nagler described the project’s mission of growing production possibilities for the studio. Warner Bros. Studios houses 32 soundstages at their main lot and eight more at The Burbank Studios ( Formally the old KNBC Studio) and will hold a total of 56 soundstages once the company takes up residence at the lot in 2025.

“We are very pleased to further our ongoing relationship with Jeff Worthe and his outstanding team, and we’re excited for this opportunity to utilize the best-in-class Ranch property that the Worthe Group is creating over the next few years,” Nagler said. “Continuing to enhance our state-of-the-art studios and full-service offerings for our productions and partners is a key priority for our company, and the new Ranch Lot development will certainly fulfill this goal in the Los Angeles area.”

This studio expansion follows Governor Gavin Newsom’s signing of Senate Bill 144, which was authored by State Senator Anthony Portantino and outlines a large investment in entertainment production and construction. Newsom approved the bill, which includes a $150 million incentive for sound stage production and a $180 million increase to the current film and television tax incentive program, in July of this year.

The Warner Bros. Ranch Lot property, which is a site for offices of both Warner Bros. Animation and The CW, was firstly operated by Columbia Pictures in 1934 and later taken over by Warner Bros. in 1990. Many iconic productions have taken place at the lot, such as the filming of television programs “Bewitched” and “I Dream of Jeannie,” and more recently shows like “Young Sheldon” and “Animal Kingdom.”

In April of 2019, it was announced that Worthe and Stockbridge would be acquiring the Ranch Lot in 2023. As a part of this deal, Warner Bros. will become the sole long-term tenant of two office buildings on the property designed by architect Frank Gehry which are currently under development. A portion of the Burbank Studios campus ( Formally KNBC Studios)will also be purchased by Warner Bros. from Worthe and Stockbridge under the agreement, which will offer eight soundstages, production office space, a commissary, and a mill building.

As reported in the Wall Street Journal in July, audiences staying at home during the pandemic have resulted in a higher demand for new films and television shows. Resultantly, production crews are hard-pressed to find places to film, and implementing more soundstages is an increasingly valuable asset to studio companies.

The additions of this project will further Warner Bros.’s entertainment output as the demand for filming space continues to be driven higher throughout the country. When speaking about the redevelopment, Worthe described how the undertaking will yield lasting successful results for Warner Bros.

“We are excited to participate in expanding Warner Bros. production capacity here in Burbank,” Worthe said. “Many productions have left California and taken those good jobs with them. This will be the permanent home to a host of new TV shows and movies for many years to come.”