Tweet
One of the most exciting shows of the year is ready to burst on the scene! It’s time for Pop Show 34: What I Stand For! The John Burroughs Vocal Music Association continues their amazing tradition of singing, dancing, dazzling costumes and eye catching sets for their 34th year in a row!
The last year was an exciting one for the Vocal Music Program at JBHS. Powerhouse sang on 3 episodes of The Voice. It was also the year that both Powerhouse and Sound Sensations were awarded Grand Champions in their divisions in the Show Choir Competition in New York.  This year looks to be on equal footing for great music, dance and performance opportunities for all our choirs! 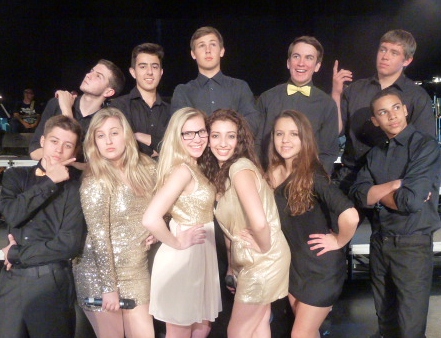 While Pop Show was born 34 years ago based on the show choir genre of music, it was the breakout hit Glee’s (pilot episode which was filmed in the John Burroughs choir classroom), that has set the show choir world afire and fuels the spirit of this entertaining show. That spirit is evident in every song and show choir set that the VMA will present.  The evening will feature all of the school’s five Show Choirs, a cappella groups, the show stopping Dance Ensemble, a variety of small groups, duos and soloists performing music and choreography they have chosen themselves.  The Vocal Music Association has over 200 students involved in the performances.  Burroughs’ Pop Show has a reputation that brings students, alumni and fans from all over Southern California, for these performances. One of the evening’s highlights is sure to be the competition sets. Pop Show will be your first chance to see this year’s exciting contributions to the show choir world.

Being the “real thing” and not a fictional television show, Pop Show 34, along with showcasing amazing talent, helps raise the funds, which enable this program to excel.  During these difficult economic times, programs such as this are dependent on raising additional funds in order to pay for any extras. Your attendance and support helps this outstanding arts program to continue.
Performances are Thursday, February 28th, Friday and Saturday, March 1st and 2nd at 7 p.m. and Sunday, March 3rd at 2 p.m., in the John Burroughs High School Auditorium, 1920 W. Clark Avenue, Burbank Ca 91506.General Admission to Pop Show 34: What I Stand For is $16; $11 for students and seniors.  Reserved seats are $25.  For tickets please visit www.jbhsvma.com or order online at http://www.itsmyseat.com/JBHSVMA/ .