A Nevada woman driving a pick up truck left a two-block long trail of destruction as she attempted to flee from California Highway Patrol units who were attempting to stop her for reckless driving. 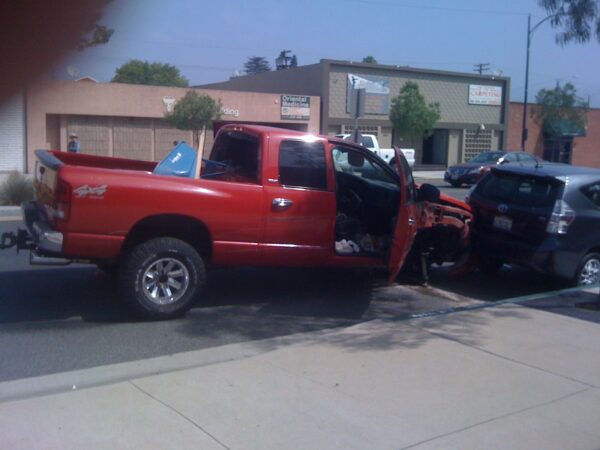 After losing both of its front wheels, the truck finally came to a stop as it struck a parked Toyota at the corner of Lima St. and Burbank Blvd. (Photo by Stan Lynch)

The incident began around 10 a.m. when the CHP tried to pull over the bright red Dodge Ram pick up truck she was driving on the 170 Freeway.   Instead of stopping, the woman exited the freeway at Burbank Blvd.   With several CHP units in pursuit, she then headed east on Burbank Blvd. towards Burbank, before finally crashing the truck into Toyota parked near Lima St. after striking 14 other vehicles .

Along the way, according to reports, she struck one moving vehicle and four parked cars, before sideswiping 10 more cars parked on Burbank Blvd. between Hollywood Way and Lima St.   One of the two large blue wheelbarrows in the bed of the truck bounced out onto the corner at Avon St.  The right front wheel and part of the trucks suspension system lodged between two of the parked cars.  The left front wheel fell off in the middle of the street.  The truck ended up with its front end on the pavement as it rammed the last of the cars in the block. 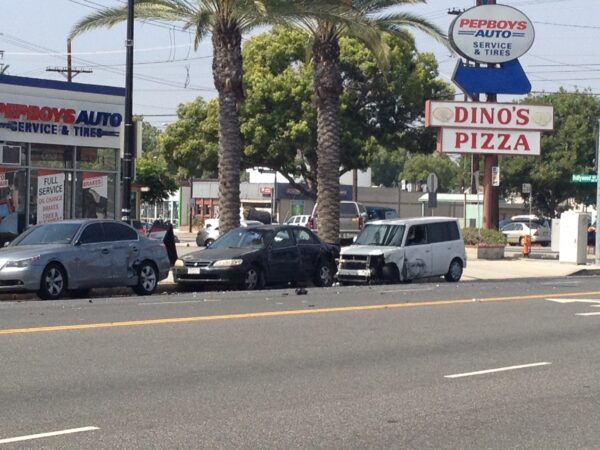 According to witness Teri Rozzell of Burbank, who saw the pursuit come to an end, after the truck came to a stop the woman jumped out and attempted to flee on foot.

“I saw this woman running down the middle of the street in heels and a wrap around skirt. Officers with guns were drawn chasing after her yelling at her to stop,” said Rozzell.

The unidentified woman was finally taken into custody by CHP officers. She was reportedly checked out by Burbank Fire Department paramedics before being taken to the Los Angeles Police Department’s Van Nuys Jail.  All of the parked cars were apparently unoccupied at the time of the crash.  The condition of the people in the first car she struck is unknown at this time. 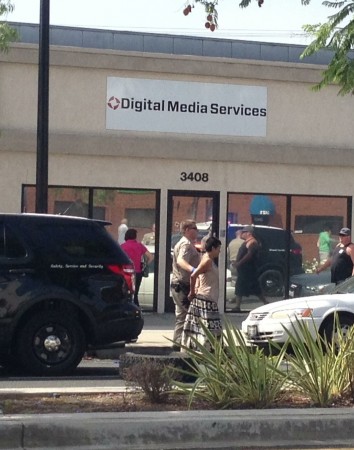 Burbank Police officers responded to the scene and closed all eastbound lanes of Burbank Blvd. between Hollywood Way and Lima St.  The street remained closed for more than two hours. At least eight CHP units were lined up in the street behind the crashed pick up truck.  Several CHP officers were at the scene for hours investigating the incident. 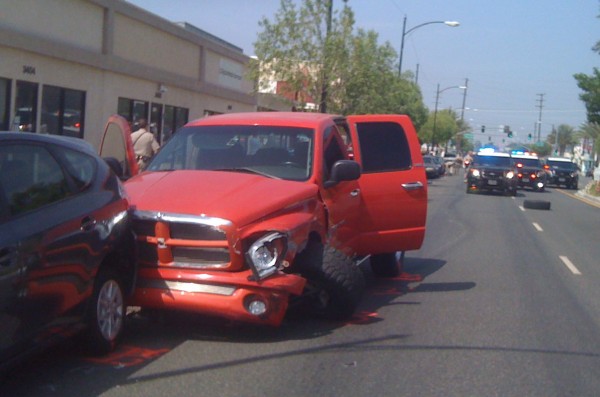 A long line of CHP vehicles line Burbank Blvd. as the red truck finally comes to a stop after both front wheels are torn off. (Photo by Stan Lynch)