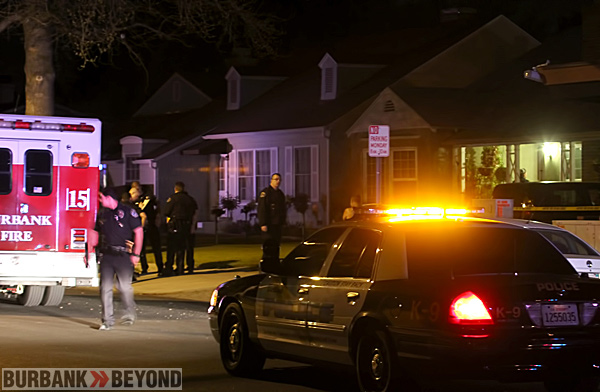 Burbank Police officers along with dectectives gather information regarding a suspicious death in the 500 Blk N. Sparks St. (Photo by Ross A. Benson)

UPDATE: David Perry, 43, whose home addess is where the dead woman, Dorothy Jean McGuire, was found,  was arrested on Saturday for murder in her death.  Bail for Perry was set at $1 Million.

On Friday March 2,  at approximately 7:31 pm, Burbank Police Officers responded to a report of a woman down in a vehicle in the 500 block of North Sparks Street.   On arrival, Burbank Fire Department personnel were already on scene and pronounced a White Female in her mid-30’s dead in the passenger seat of a vehicle parked in the driveway  of the house at 512 N. Sparks St.

At this time, the cause of death is unknown. Burbank Police Investigators are continuing their investigation into the woman’s death.

The Los Angeles County Coroner’s office responded and is assisting Burbank Police Department with the investigation. The deceased woman’s identity has not been released pending notification of the next of kin.

Early Saturday morning, after further investigation by the Burbank Police Department, it was determined  that a crime had occurred involving the deceased woman.  Burbank detectives had interviewed a man who had some connection to the victim.   Since the crime occurred in the jurisdiction of the Los Angeles Police Department, reportedly in La Tuna Canyon, the case was turned over to homicide detectives from the the LAPD Foothill Division, who were continuing to interview the man regarding the woman’s death.