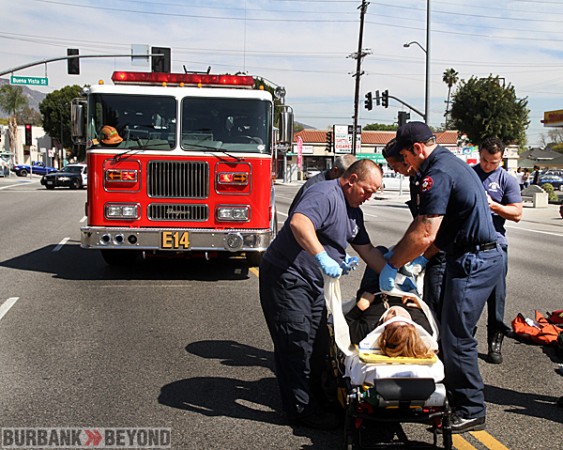 Burbank Paramedics package up a patient who was struck on Magnolia just East of Buena Vista Saturday afternoon. (Photo By Ross A. Benson)

Burbank Police and Firefighters responded to the 2500 block of W. Magnolia Blvd. on Saturday afternoon,  after several citizens called 911 to report that a woman had been  struck on by a car in front of the Handy Market.

Police responded “Code 3” (red lights and siren) along with firefighters.  When they  arrived on scene, they found a woman lying in the number one lane of eastbound traffic.    Paramedics treated the unidentified victim at the scene, and transported her to Providence Saint Joseph Medical Center with the complaint of pain.

Several traffic officers started interviewing all the witnesses who saw the accident happen.  On Saturdays, the Handy Market sets up a large grill in their parking lot, and sells barbecued tri-tip and chicken.   Additional officers blocked Magnolia Blvd. in both directions until the accident was cleared up.