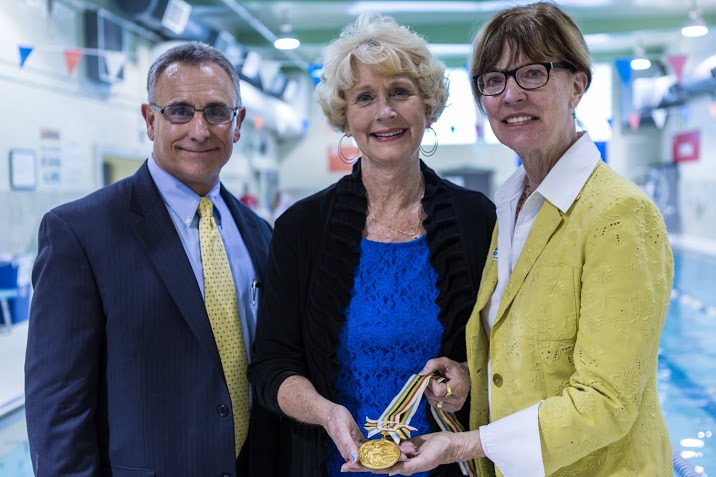 As part of the celebration of both its history and its vision of the future, Wednesday the Burbank Y – which received the first business license issued by the city of Burbank – unveiled more than $1 million in renovations of its aquatics center and pool, men’s shower facilities, enhancements to the Child Development Center, gym renovations and other facility upgrades to further serve its membership.

In 2014, the Burbank Community YMCA celebrates 90 years of being a centerpiece of the Burbank community – helping people to learn, grow and thrive – as a leader in youth development and in teaching and imparting family values, healthy living and social responsibility.

On hand for the festivities, serving as co-masters of ceremonies, were

Burbank City Mayor Emily Gabel-Luddy and two-time Olympic gold medalist swimmer Cathy Ferguson, a Burbank High School student and Y member who trained at the Y’s pool. Ferguson competed at the 1964 Olympic games in Tokyo, winning gold medals in the 100-meter backstroke and as a member of the U.S. team in the 4×100-meter medley relay.

Elementary Ashley Erikson - October 26, 2021 0
Darlene Crain’s second grade class from Bret Harte Elementary, have created clay monster mugs which are on display at the Ugly Mug Coffee House until Halloween. Owners of the Ugly Mug Coffee House, Steve and Emily Nalbantian, had children attending Bret Harte when their coffee shop first opened. “I remember thinking how it was such a great name for a coffee place and the idea just came to me,” said Crain, who tries to do this art project each year with her students.

News Ashley Erikson - October 26, 2021 0
The Moms of Burbank or MOB for short is an essential social support group for local moms and caregivers that organizes weekly playgroups, monthly service projects, parent night out events, and holds an active private online community. Earlier this year, member Pearl Wu, was diagnosed with breast cancer, and became the inspiration for an upcoming Halloween themed 5k run in which members of MOB will be running in order to raise money for a non-profit organization called Metavivor that funds research for Stage IV metastatic breast cancer.