The fourth graders and fifth graders of Providencia Elementary School delighted a packed audience of parents and well-wishers with their May 14 “Spring Concert of Movie Music.” With piano accompaniment, the budding cellists and violinists played several pieces beloved by children of all ages:

“Once Upon a Dream” from Sleeping Beauty (4th Grade)

And a special treat, “Fiddler’s Hoedown” from featured student musicians from the Music Unites the World Festival. 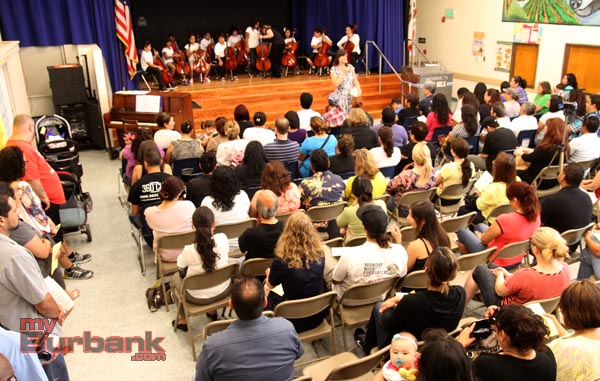 Principal Jennifer Culbertson told the audience that Providencia is unique in offering a music program for all of its students, from Kindergarten through the Fifth Grade. From Kindergarten through the Third Grade, all students receive music instruction weekly. And once in the Fourth Grade, students are expected to take on the challenge of playing an instrument. They get to choose whether to tackle the violin or the cello. 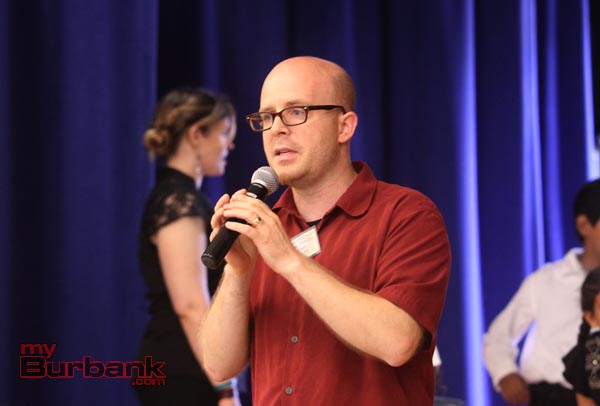 Ryan Rowles Director with Education through Music speaks to the parents and guests during concert. (Photo by Ross A. Benson)

“Education through music develops the whole child—emotionally and socially as well as academically,” stated Ryan Rowles, a director for Education in Music LA. “It also develops students’ abilities to learn transferable skills.”  He went on to explain that playing an instrument demands that the student develop new physical coordination skills, as well as develop the mental ability to translate notes on a page into rhythm and sound. Rowles notes that these musical learning experiences have translated into stronger academic performances in other subjects. 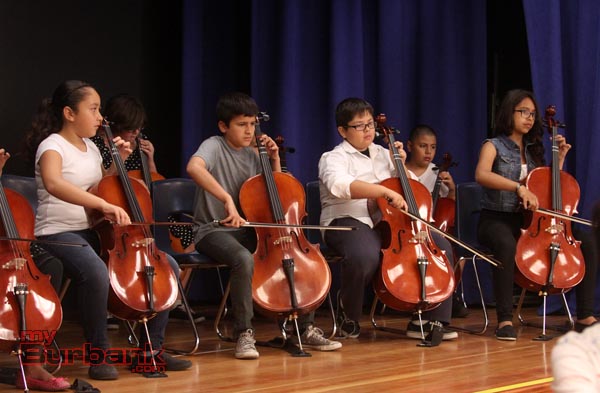 Providencia’s music program could not exist without broad community support. “We have to raise $16,000 yearly,” remarks Principal Culbertson. Support also comes from major corporations and organizations like Education in Music LA and the Burbank Arts for All Foundation. Arts coordinator Peggy Flynn (recently honored by BAFA) reminded the audience that seven years ago (2006), the LA County Arts Commission challenged the 81 school districts within the County to include arts education in their K-12 curriculum.  The Burbank community rose to the challenge and, among other activities, established BAFA. “Today, the Burbank school district has not only become a regional leader in arts education, but also a national one,” said Flynn, “thanks to arts programs like the one at Providencia.” 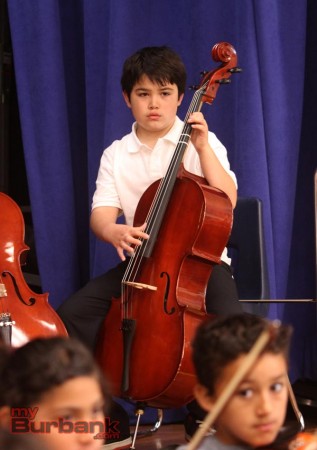 The Leadership Burbank Class of 2013 proved to be yet another example of the community’s broad support for the arts.  Following the conclusion of the concert, the audience learned that the Class of 2013’s community service project focused on arts education. With a major assist from Providence St. Joseph’s Medical Center, the Class of 2013 purchased 16 violins for Providencia (and 15 for Edison Elementary), as well as music stands.  As a result, students can now practice the violin at home, not just at school.

But there significance of Providencia’s music program goes well beyond musicianship. “Music turns out to be a great way to mainstream special education students with others,” stated Principal Culbertson.  “A student with autism came out of her shell because of the music program.” And students sometimes discover that special education students may be among the most talented in the music class, giving them a new perspective about their classmates. 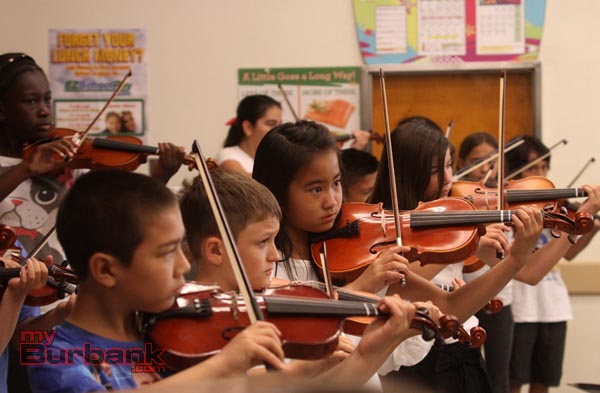 Many Providencia students may never have tried to make music but for the school’s music program. It calls to mind a story related by Tom Rath in his seminal book, Strengths Finder: A man found himself at the pearly gates and asked Saint Peter, “Who was the greatest general of all time?” “Oh that’s a simple question,” Saint Peter replied. “It’s that man over there.”  But the man responded that Saint Peter had to be mistaken. “I knew that man on earth, and he was just a common laborer.” “That’s right my friend,” agreed Saint Peter. “He would have been the greatest general of all time, if he had been a general.” 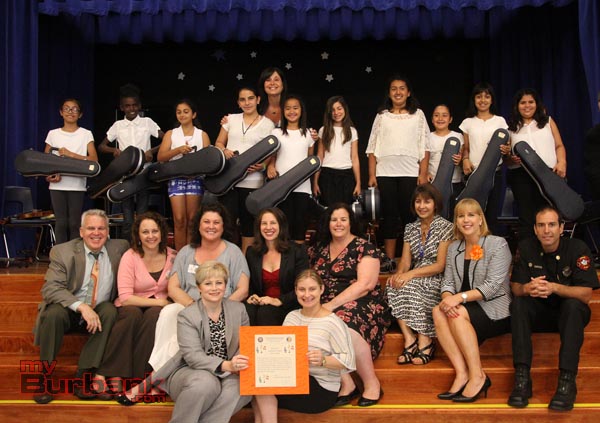 Providencia students show their new violin cases, which will enable them to take the violins home to practice, along with some members of Leadership Burbank who presented them to the students. (Photo by Ross A. Benson)

At the Spring Concert, we saw the earnest young faces concentrating on their violins and cellos. Perhaps some of them will become great violinists or cellists. Several years from now, perhaps others will wow us in a Burbank High or Burroughs High concert event, like the present-day high school students that will be wowing us this weekend. And maybe some will one day be content with a very special audience of one, charming their future spouse with a song. 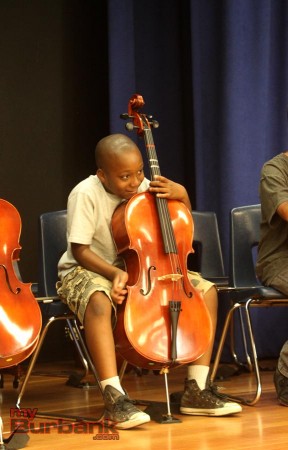 And maybe, just maybe, one of them might find the cure for cancer. Or found the next Microsoft. Or find a better way than war.

The creative mind is a wonderful thing.  The violin piece laboriously learned at nine may, through the mind’s mysterious alchemy, enable the adult version of that mind to make a world-changing breakthrough.

But on a bright May morning, it was wonderful just to see engaged children entertaining us with their music. 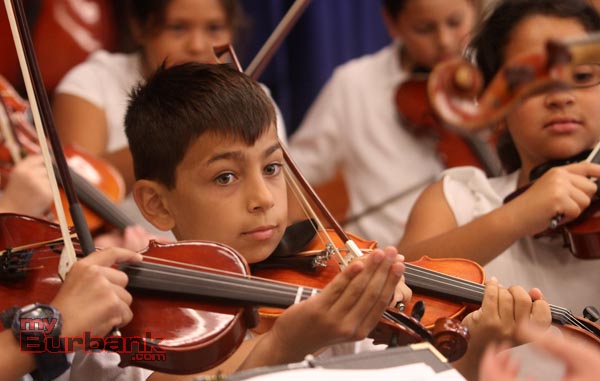 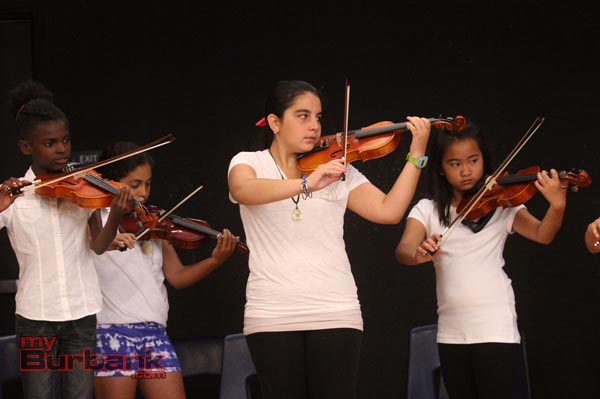 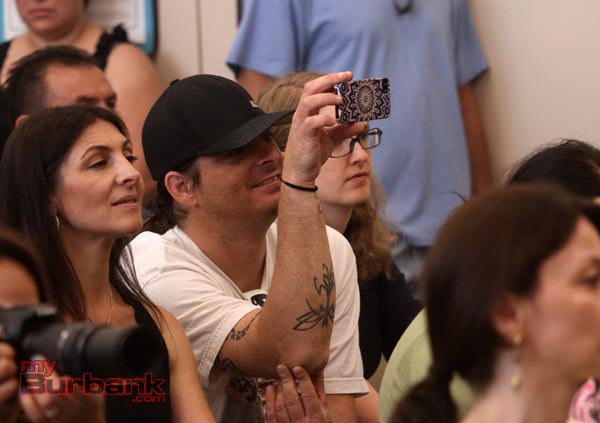 A happy parent video’s his child during Tuesday’s Violin concert. (Photo by Ross A. Benson) 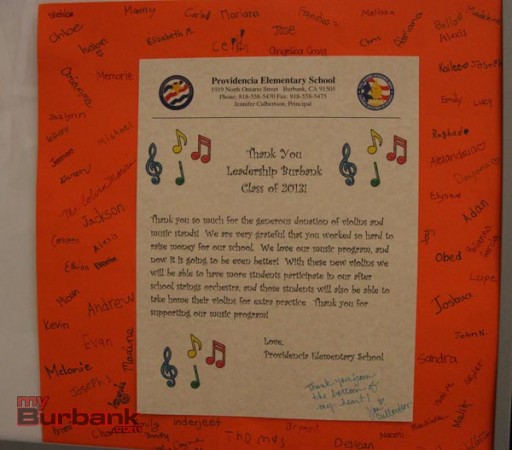