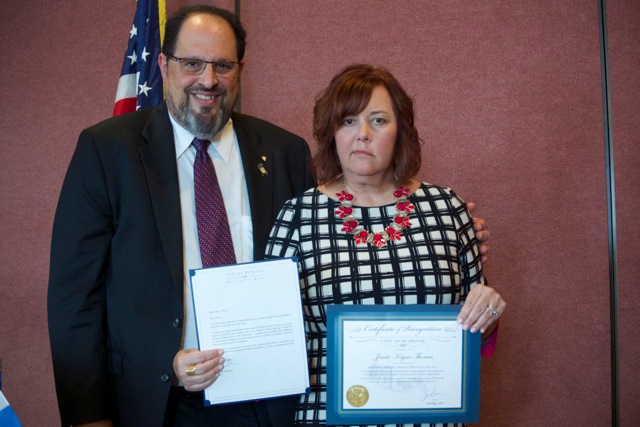 This year’s recognition is “a great tribute to a great person,” said Gary Olson, Executive Director, Burbank Chamber of Commerce. “Jamie has meant so much for our community over the years. How wonderful we have a great turnout to honor her.”

“Jamie brings focus, commitment and structure to the VoluntEARS’ work,” praised her boss Joan McCarthy, Disney’s Senior Manager for Community Engagement. “She brings a lot of fun and enthusiasm. She also brings food!” (Cooking is one of Jamie’s loves, along with her zest for the outdoors.)

With the Taproot Foundation, she piloted the first formalized skills-based VoluntEARS program to make the popular group even better at serving the community. Taking the initiative is just something Jamie naturally does, according to Lisa Rawlins, Warner Bros. Senior Vice President for Public Affairs. “She’s always the first to volunteer for whatever needs to be done. And it’s always done on time, with a smile and great leadership.”

Mayor Gordon commended Jamie “for her dedication in helping others. I congratulate you on your well-deserved success.” He was “very excited to have had the opportunity to honor Jamie.”

“This is completely overwhelming,” said Jamie as she joined Zonta Club President Brittany Vaughan at the lectern. Gesturing to her family, Jamie said, “The fact that you guys are here today to share this with me means so much.”

Her family knew she was a community powerhouse, but recently their focus had been on other things. It was only recently that Jamie had won a life-or-death battle. When she said to her audience, “I am cancer free,” she drew a second of three standing ovations. She credits the Disney Cancer Center and the support of family and friends for her victory.

“I’d like to tell you what an angel Jamie is,” said hubby Mike Thomas, “but I saw her jaywalk once.” Maybe. Their two dogs aren’t talking. But in a voice choked with emotion Mike added, “I’m a lucky man to call her my wife.”

Jamie recalled her days with the “notorious” Burbank Leadership class of 2005, which produced a bumper crop of community leaders, many of which were on hand to celebrate Jamie’s recognition. The Burbank leadership experience “opened her eyes to the various ways we can support the Burbank community.” (Zonta made a donation of $500 to Leadership Burbank in Jamie’s honor.) Jamie loves Zonta too. “They empower women. They also do a fantastic job of bringing together business and community.”

For her part, Club President Brittany is “humbled and honored to have been able to present Jamie as Zonta Club of Burbank’s Woman of the Year. Jamie brings joy and enthusiasm to all of her endeavors,” Brittany continued, “and Burbank is lucky to count her as one of their own. I am so pleased that Zonta was able to highlight the accomplishments of such a remarkable woman.”