Campers pose for a quick group shot. The camp was held at Luther Burbank Middle School over a three day period (Photo By Craig Sherwood)

With more than 60 campers in attendance, the 10th Annual MVP Winter Basketball Camp sponsored by the City of Burbank’s Park and Recreation Department concluded last week with plenty of excitement and fun. 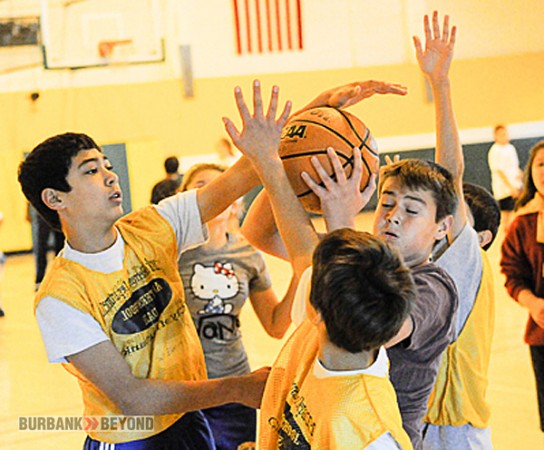 Campers mix it up for a rebound (Photo By Craig Sherwood)

“It’s been a really fun week where we could play basketball games and work on stuff,” said Joseph Augustine, 11, who attends St. Francis Xavier. “It’s fun to play against your friends.”

Augustine and Wilke were one of 65 kids in grades fourth through eighth who came out to the camp at Luther Burbank Middle School. MVP Camp Director Mike Graceffo did a wonderful job of coordinating the three-day session by emphasizing a theme for each day that focused on fundamentals and team play.

“I just feed on this. I love the energy and the enthusiasm of the kids. It’s about the kids not the egos,” Graceffo said. “We are trying to teach the kids the proper way to play with fundamentals. At the same time, I want the kids to have fun. That’s what it is all about.”

The camp ran from 9 a.m. to 12 p.m. Wednesday through Friday of last week. After celebrating the holidays, the MVP camp was the perfect remedy to get the boys and girls active again while school was still on winter break. 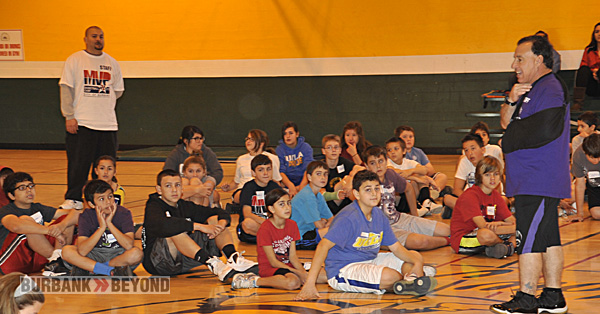 Graceffo created eight teams (Duke, North Carolina, UNLV, UCLA, Clippers, Lakers, Bulls and Bobcats) where they had practices and games against each other. It created a competitive atmosphere amongst the teams.

“You meet new people and get to play against them. You get to see how good they are so when you play their teams you can play aggressively or not,” Wilke explained.

Coaches from local high schools and camp counselors gave up their time to instruct the campers the finer points of basketball.

“We bring in coaches from different areas. They all come here and are willing to teach the kids,” Graceffo said. 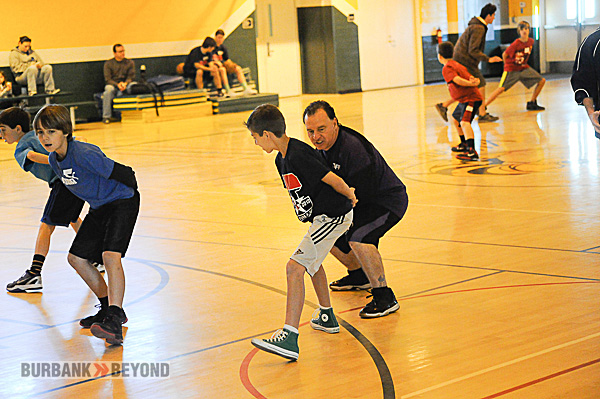 “I learned how to play defense the correct way by sliding your feet and boxing out,” Augustine said.

After another successful camp, Graceffo looked forward to a summer week-long basketball camp as well as seeing the campers develop into fine young men and women. Graceffo is synonymous with youth sports in Burbank and this camp was again a rewarding experience for him.

“It’s cool to see all over town the kids wearing their MVP basketball t-shirts,” said Graceffo, who has run this camp for the last six years. “The rewarding part for me is seeing the kids come back to camp to help out or reading about these kids later on when they are starring at their local high schools. That makes me feel real good.” 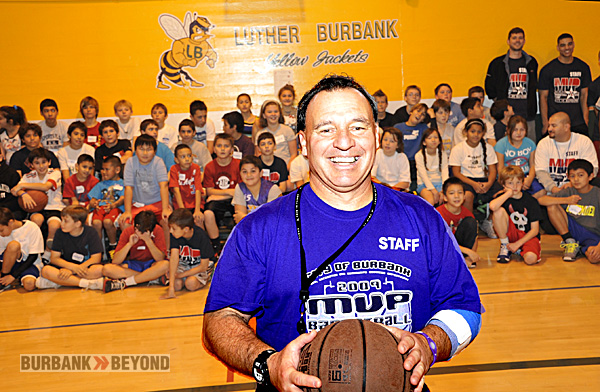