Two local organizations have been calling attention to the plight of domestic violence victims and sexual crimes against people around the world through separate projects.

The Zonta Club of Burbank Area has collaborated with the Burbank Domestic Violence Task Force to create the “Baring Their Soles” project, which is continuing through Thursday evening, said chairwoman Marva Murphy, a Zonta member. 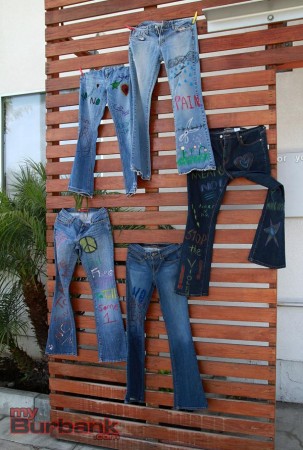 An art installation featuring four telephone booths has been placed in the Burbank Town Center, on the third floor outside the Burlington store. Three of the booths are empty and one is filled with shoes that represent the 337 victims (79 men) of reported domestic violence cases in Burbank last year, Murphy said. The four phone booths represent the one in four women who will become victims of domestic violence in her lifetime.

Telephone booths were used to attract attention because they are unique, Murphy said. And some younger people have not seen a telephone booth and don’t know what they are.

“The telephone booths are also a reminder that help is just a phone call away,” Murphy added.

The project is to create an awareness of the problem as well as the services available to victims in Burbank. There are resource cards available at the exhibit that were created by the task force for people to take home. The cards have been printed in five languages — English, Spanish, Korean, Armenian and Tagalog. The cards are available at the city manager’s office and some of the parks.

Once while Murphy was at the exhibition, she was approached by two women — one was local while the other was from out of town.

“They thought it was wonderful that Burbank had so many resources available and were making the effort to bring awareness to the community,” Murphy said. “The visitor said she was going to send the information to her daughter in Washington, D.C., to show her what was done. Her daughter is involved with services for victims of domestic violence.”

Doug Murphy, the chairman’s son, was creative director for the project, and he created artwork for the installation that is inspired by Roy Lichtenstein, an American Pop artist of the 1960s.

Family Service Agency of Burbank has also conducted a project, but has broaden the scope to people around the world who have been victims of sexual assault. 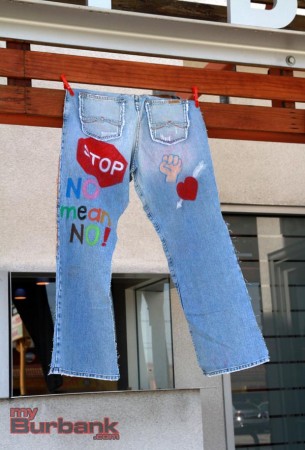 For the past 15 years, Peace Over Violence has run the Denim Day in L.A. and USA campaign on a Wednesday in April in honor of Sexual Violence Awareness Month. For more information on what prompted the campaign, visit denimdayusa.org.

In support of that, clients of the Burbank Family Service Agency decorated and painted 30 pairs of jeans and hung them outside of the agency in support of Denim Day for the last five years, said Christine Ramos, director of family violence services and the residential program.

“They take jeans and decorate them with phrases or images that are empowering to women who have suffered from sexual abuse. For ones who have experienced it, they express some of their feelings about it and what they would say to other people about it,” Ramos said. “Others who haven’t been victims, but know women who have been, they offer their support.”

People have come into the agency to ask what the project is for, so it is building awareness, Ramos said.

One of the more poignant pieces in the collection had just one simple phrase —
“No is a one-word sentence.” Another had a face with a hand over it, like keeping the person quiet. And others had rainbows and butterflies offering a more uplifting and encouraging message to victims. 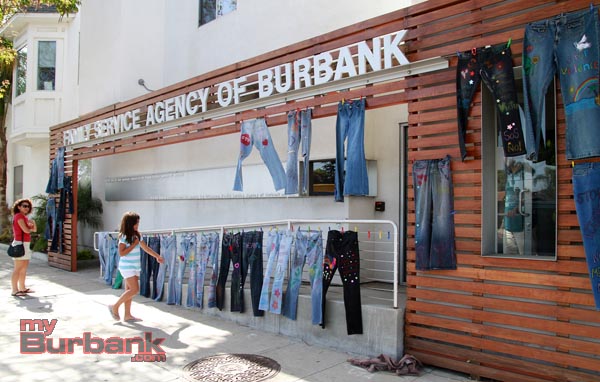