OK, I know it is not technically in Burbank, but sometimes you have to push the envelope in the burger business and in all honesty, I have heard some outstanding recommendations about Forman’s in Toluca Lake – about a tenth of a mile out of Burbank.

To start with, you are in L.A. and you know what that means – parking problems.  There is some  street parking (good luck with that) and in the rear are all those weasels who want to charge you money to park. I do believe however, that Forman’s validates parking although I was lucky enough to find parking on….wait for it….Forman!

When you enter the atmosphere is friendly and you are greeted. They request that you order any food at the bar although they do bring it to you and also handle refills.

I knew that myBurbank had been here before for a restaurant review months ago but I did not read that in advance as to not form any opinions.

After checking out the menu, I went with the

Tavern Burger which consisted of jack cheese, avocado, arugula, tomato, red onion and honey mustard. You know I had to make a couple of changes like replacing the jack chesse with cheddar and although I prefer thousand island, I stayed with the honey mustard to try something new.  I did however, had the arugula removed. There is no way that I want leaves, bushes, and anything else arugula has to offer. Give me iceberg lettuce any day of the week. 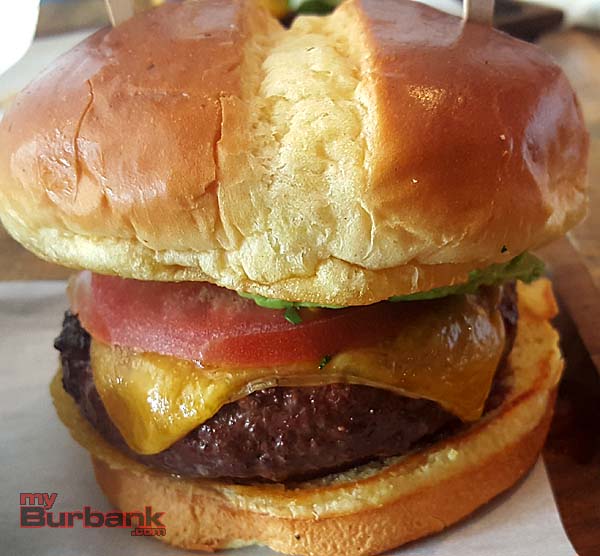 The price of the burger is a little steep ($14) but they did state that they used their own proprietary blend and was house ground daily, cooked on a wood grill and served on a potato bun. I wondered how you could cook on a wood grill when there was fire below it without it catching on fire, but that is a thought process for a different day.

Once the burger came it looked amazing.

The bun looked at first like it might be a little overbearing, but the meat just looked juicy and the cheddar cheese was prominent. The bun also had a nice toast to it and they decided to put the onion between the patty and the bun so the bun would not get soggy and self-destruct quickly. See, I do pay attention top the smaller details.

One bite in and that was it. This thing had a GREAT taste. Whatever the blend they use for the patty is, they nailed it.  I can always tell how much I like a burger by the amount that I need to drink while eating it.  I never touched that straw once until I was done. 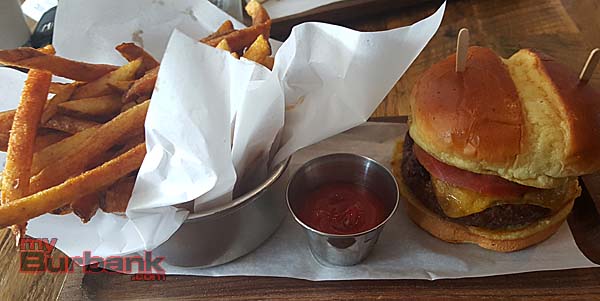 The cheese also had a great taste which I got on every bite and the avocado also contributed to the overall taste. Yes, it’s $14, but I really felt as though I got my money’s worth.

Side Notes: Also ordered the fries – well done of course – and they were actually nice and crispy. They were hand made fries that had some nice seasoning with them. They also came with a ketchup container. There was no cole slaw (damn it) on the menu – just wished there was because if they could do that with a burger, what could they have done with cole slaw!