The 2018 year in sports in Burbank was not the best, nor the worst on record. The best individual performances were in track and field, as Burroughs Jagdeep Chahal was the CIF Southern Section Division 1 champion in the boys 1,600 meters. Elizabeth Switzer led the Burroughs girls’ track team by qualifying for the state championships in the pole vault. Burroughs golfer Kiara Hernandez was also outstanding in being the best in the Pacific League. The following is a look back at the best teams that Burbank and Burroughs highs put forth in 2018.

10. Burroughs boys soccer
The Indians went 15-9-1 in 2018 and finished second in the Pacific League with a young core that was made up mostly of sophomores.
Carlos Rosales led the midfield and Carter Wells became the heart of the defense. Freshman Manny Gonzalez scored 16 goals, a program record under coach Mike Kodama. This group will get only better in 2019 and 2020.
9. Burroughs softball
The Indians finished runner-up to Crescenta Valley in the Pacific League standings. But Burroughs once again put together a solid season, finishing with a 14-5-1 record and advancing to the second round of the CIF Southern Section Division 3 playoffs. Pitcher Presley Miraglia moved to play at Cal State Long Beach.
8. Burroughs girls soccer
The Indians had a stellar season going 15-3-3 overall to place second in league. Burroughs won its first CIF Southern Section playoff game since 2009 with a wild-card victory over Brentwood School. Freshman Lauryn Bailey and junior Abbie Riggs were two of the Indians’ key offensive players. Olivia Cashman and Emily McHorney were two other top players.
7. Burroughs girls cross country
The Indians finished second in the Pacific League behind Burbank, ending a domination by Crescenta Valley and or Arcadia, that had won the league title every year for more than a quarter century. Burroughs also went on to advance to the CIF Southern Section finals. Sophomore Jordan Guzman and freshman Sophia Navarro led the way for a team that figures to have created arguably the most competitive rivalry with Burbank High of any in the city.
6. Burbank football
The Bulldogs turned in yet another fine season, even though they lost the league title to Arcadia. Burbank won every game it was expected to win and put together a fine 7-4 campaign. Seniors Matthew Porras, Erik Harutyunyan and Duncan Smith will definitely be remembered for the mark they left at the school and all are projected to play in college.
5. Burroughs girls basketball

The Indians turned in another fine season in 2018, finishing with a 23-8 record and a share of the Pacific League title. The team was blessed with a solid freshmen core who are now sophomores, led by Faith Boulanger and Kayla Wrobel. This has consistently been one of the top teams in the city under veteran coach Vicky Oganyan and that doesn’t appear to be changing any time soon.
4. Burbank boys track and field 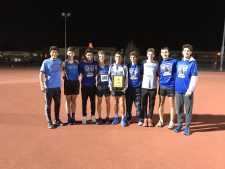 The Indians won their ninth consecutive Pacific League title under coach Joel Brinton. Burroughs also advanced to the second round of the CIF Southern Section Division 1 playoffs, only to be eliminated by national power Loyola of Los Angeles. Diego Rosal and Cole Kaitz were the leaders for Burroughs.

The Bulldogs won their first league title outright since 1978 and advanced to the CIF Finals, finishing 10th in Division 1. Burbank was led by senior Shalom Mejia and junior Sol Fernandez. Although this was an experienced group that will lose several top runners to graduation, there is a great group coming up replace those that will depart. Expect Burbank to be very strong again in 2019.

City of Burbank Craig Sherwood - March 2, 2021 1
City files suit to have Tinhorn Flats shut down. Asks for injunction to have electricity cut and doors padlocked along with paying all court costs