“Symbolism is the practice of representing things by symbols, or the practice of investing things with a symbolic meaning or character. A symbol is an object, action, or idea that represents something other than itself, often of a more abstract nature.” 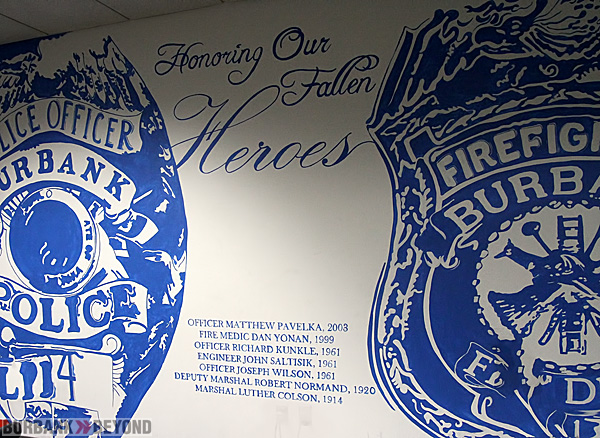 In 2010 artist Jessica Rodrigue painted a large mural in the gymnasium located within the Police and Fire Department Headquarters Building in downtown Burbank.  The mural features faded badges from both departments, a couple high rise buildings, an eagle, emergency vehicles, a background of American flags, capped with the title “Honoring Our Fallen Heroes” above a roll call of officers and fire fighters who lost their lives while serving the community.

If you ask a police officer or fire fighter what they see in the mural, each will give you a different interpretation of the symbolism contained within the painting.  BurbankNBeyond had a rare opportunity to talk with a small group of police officers and firefighters, learning how they view, interpret, and consider the symbolism contained in the mural.

“I see the badges” mentions Fire Department Captain Jim Baldridge.  “The badges fade out on top, giving the feeling something is missing” he continues.  “What’s missing is our fellow firefighters.” 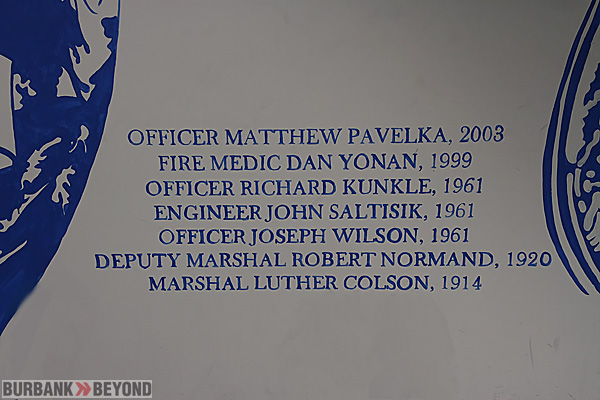 The fire fighter’s badge carries number 91, that of Firefighter/Paramedic Dan Yonan, lost in 1999.

In the background we hear the constant chatter of radio and dispatch traffic, an audible reminder the job of protecting citizens and visitors to Burbank is not prepared to take a break for interviews, and the interview could be over in one second if the need arises, allowing either or both fire fighters and police officers to move quickly towards danger or disaster.

Captain Baldridge believes the high rises are symbolic of 9/11.  Firefighter Richard Morris added “you see the tall buildings, and you think of all the firefighters and police officers who have lost their lives in the line of duty, and those who are on duty every day.  I see the mural, and there are a lot of thought-provoking images.”

Sgt Ryburn jumps in, explaining while it is good to honor those on the wall, it is also important to “not be added to the wall” ourselves.  “The gym is a place to maintain our physical fitness, focusing to keep on top of our game, as we do not want to be added to the wall.” 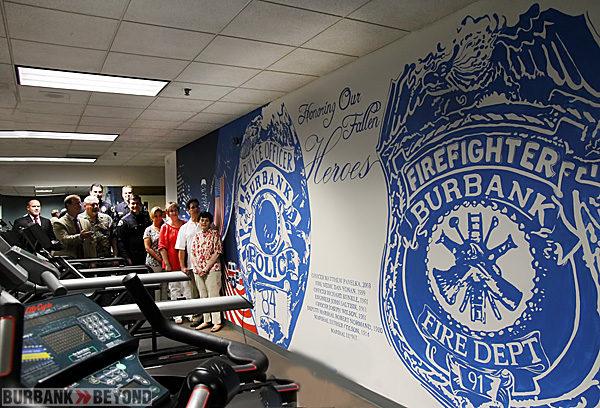 The mural is viewed by the Matthew Pavelka’s family and other Burbank Police Officers during a recent visit to the Burbank Police Station. (Photo by Ross A. Benson)

The small group of officers and firefighters gathered, looking at the wall, having a bit of quiet small talk with each other, reminiscing and talking through memories of those fallen.  Memories of police officers supporting a firefighter’s funeral, fire fighters lending professional and emotional support to officers during the investigation of a fallen police officer (Officer Matthew Pavelka, Badge 84, killed in the line of duty on 15 November 2003).

Sgt Ryburn breaks the moment with an image from a day long ago, when Firefighter/Paramedic Dan Yonan was laid to rest.  “I will never forget that day.  I was a motor officer when he passed away.  It was raining the day we had his funeral, and we saw flags all over Forest Lawn.  It was such an honor to escort the casket.  He was one of our own, it was an honor to escort Dan to his final resting place. In Burbank we know each other, we’ve gotten used to seeing each other, being with each other.”

It is hard to keep police officers and fire fighters in a somber mood for long.  Within a few minutes they are back to joking and teasing.  Captain Baldridge offers “like all families we have our differences, and can be just as tenacious as brothers.  However, the gym is a great place for us to get together and build relationships.” 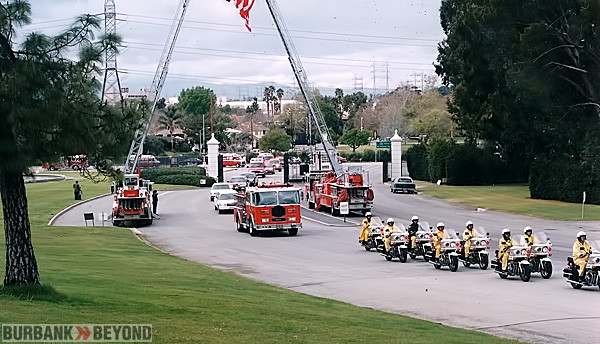 The funeral procession of Dan Yonan’s funeral.(Photo by Ross A. Benson)

A few more stories about practical jokes, rivalries, competition, and the differences between generations of cops and fire fighters.  The old guys are in the gym providing guidance to the young, and when needed putting context to the symbolism presented by Ms. Rodrigue’s mural.

A younger police officer, Officer Ashley Sudbrook steps in, and is “volunteered” by the old guys to share a few thoughts on her impressions of the mural.   “This department does not take anything lightly, and nothing is forgotten.”  She continues to explain the gym is a great place for both the police and fire fighters to “hang out” and get to know each other. “This is a great place to pass along war stories” among our colleagues.

“We know when we come to work, we might not go home that night” reminds Officer Sudbrook.  “However,” she says, while looking up at the mural, “we know our efforts will not be forgotten.”

While the group continued standing in front of the mural, conversation had veered off to discussions on the relationship between police and fire fighters, with the only reference to the wall being an occasional comment on how appropriate it is to have the badges together on the wall, as they should be, in a city like Burbank.

Those honored on the wall: 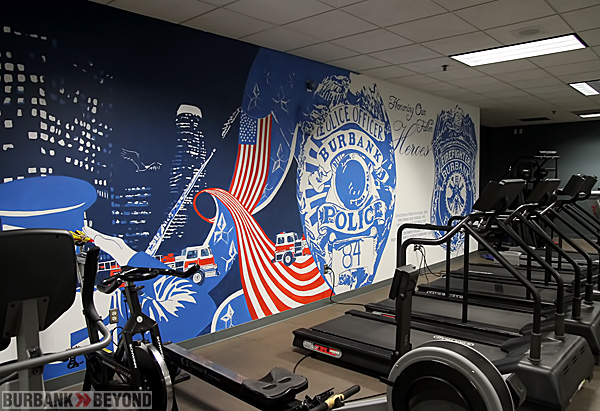 The mural as shown painted on the weight room wall. (Photo by Ross A. Benson)