The Burbank Bob Hope Airport Authority and the City of Burbank held a Community Workshop in the aging terminal on the evening of September 16. The session opened with a 50 minute presentation by members of the Authority, including President Susan Georgino, Executive Director Dan Feger and Deputy Executive Director Monica Newhouse, focusing on the safety concerns driving the push for a new terminal. The amenities and security parameters required and requested by both government, airlines and passengers were acknowledged, along with a discussion of the adjacent space available for new construction. 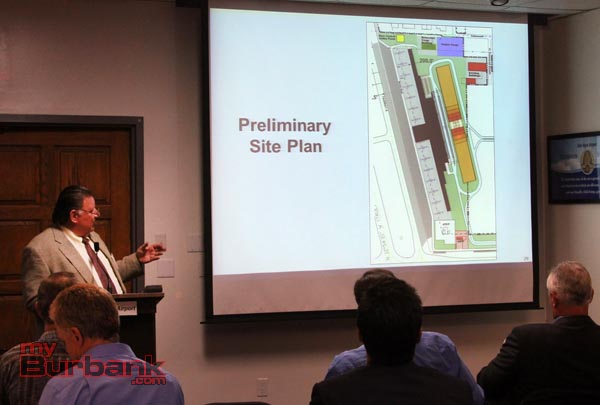 Replacement Terminal Consultant/terminal planner Mark Conway and Mr. Feger also discussed preliminary terminal plans and use of adjacent available sites proposed for the development along the northeast quadrant of the airport property. The preliminary plans focus on a two-story linear terminal, with seven north gates and seven south gates, situated parallel to existing Runways 15 and 33, which run next to each other in a north-south direction. A five-story parking structure with about 3600-4000 spaces, with a close access to the terminal would be built between the terminal and Hollywood Way. The parking structure could be designed and built with north and south wings, allowing for a street view of the replacement terminal entrance through the center. 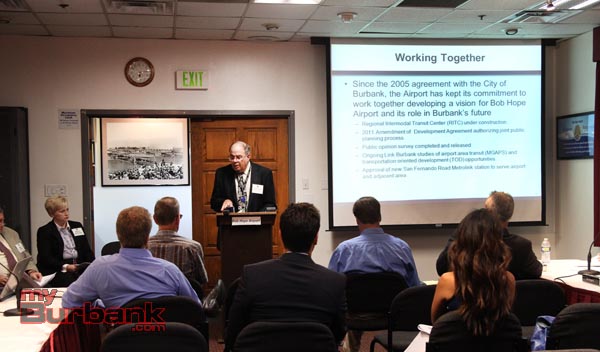 Bob Hope Airport Exex. Director Dan Feger speaks to the crowd about how the Airport is looking forward to working together. (Photo by Ross A. Benson)

The Airport Authority speakers stressed multiple times that the plans are for a replacement terminal only, with the same number of 14 gates as in the current 83-year-old terminal. The current terminal does not meet FAA standards for distance from the runway, nor does it meet current earthquake safety regulations. The amount of parking spaces planned for the entire airport footprint would not exceed the current 6331 parking spaces. In fact, the emphasis was placed on connecting the replacement terminal easily with the new Regional Intermodal Transportation Center (RITC), allowing for about 2300 or more parking spaces near that facility. 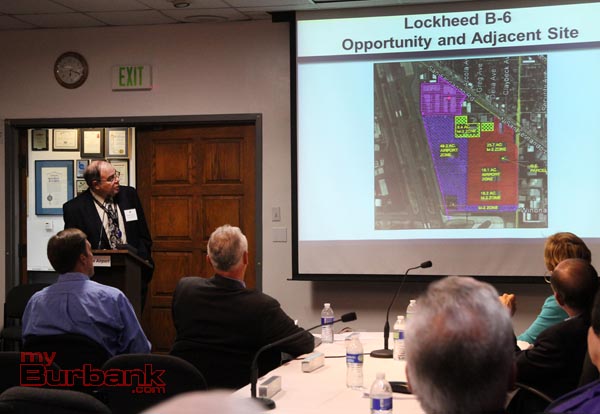 Bob Hope Airport Exex. Director Dan Feger speaks to the crowd about where they propose a new terminal. (Photo by Ross A. Benson)

Intermodal Transportation The currently-under-construction RITC, estimated to cost around $100 million dollars, was a touchstone throughout the presentation. The City of Burbank and the Airport Authority envision creating a hub for business and travel through the connection of airport and the RITC along Empire Ave., directly across from the Burbank Bob Hope Airport Train Station at the southern end of the airport property. The RITC will consolidate car rental services, a bus station for local and regional services, a parking structure and an elevated walkway connecting the RITC and the airport. The Bob Hope Airport Train Station serves Amtrak and Ventura County Metrolink trains.

The recently-approved new Metrolink station to be built at the northeast end of the airport area at Hollywood Way and San Fernando Rd., servicing the northern San Fernando Valley, Santa Clarita and Palmdale trains, is another part of the plan to augment the RITC and the replacement terminal at Burbank Bob Hope Airport. 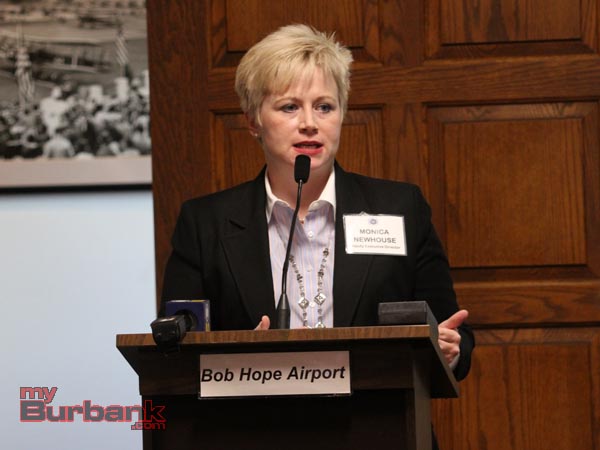 Officials also have a vision of a complementary development of shopping, restaurant, entertainment, hotels and meeting facilities, east of the replacement terminal, along Hollywood Way between San Fernando Rd. and Winona Ave. They envision a self-contained business and transit community of sorts. People fly or take the train into the airport from all over the state and country and never have to leave the area, being able to use business and meeting facilities and have all the amenities needed for comfort and entertainment located on the property.

58-Acre Land Parcel and Development Historically, the land around the airport has been a mix of residential and commercial/industrial. More recently, there has been explosive growth in businesses in the information technology and media industries. Additionally, if the City of Burbank and the Airport Authority don’t develop and use the 58-acre parcel of available land along Hollywood Way between Cohasset St. and Winona Ave., it will be sold to a third-party and the land will be developed in some way. That 58-acre parcel is one of the last remaining pieces of land in all of Los Angeles and the San Fernando Valley available for large development.

The City of Burbank and the Airport Authority view this 58-acre parcel as an opportunity to create a unique economically-positive development, with business tax revenue going to support City of Burbank services. 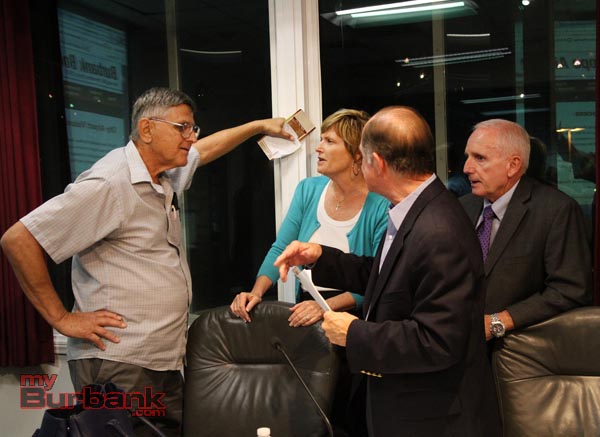 Community Concerns While over 64% of Burbank residents polled support a replacement terminal, the Authority still has a few community members concerned about the change and how it may affect their lives and property values. The community question and feedback session directly followed the presentation and lasted for about 45 minutes. Over 20 members of the Airport Authority and city officials from Burbank and Glendale were present, including Burbank Mayor Emily Gabel-Luddy and Councilmember Bob Frutos and Glendale Mayor and Authority Commissioner Dave Weaver. About 30 members of the community were also present, plus several members of the media.

Several residents from the Burbank and Los Angeles neighborhoods in all four directions near the airport were present. Katie, a Los Angeles resident on the western side of the airport near Vanowen, was concerned about the potential for increased air traffic and noise and wondered how this new building and development will affect property values. Katie’s home has had the noise-reduction upgrades made to her home, paid for by the airport’s noise reduction program, and she did say they work, and greatly reduce the airplane noise. 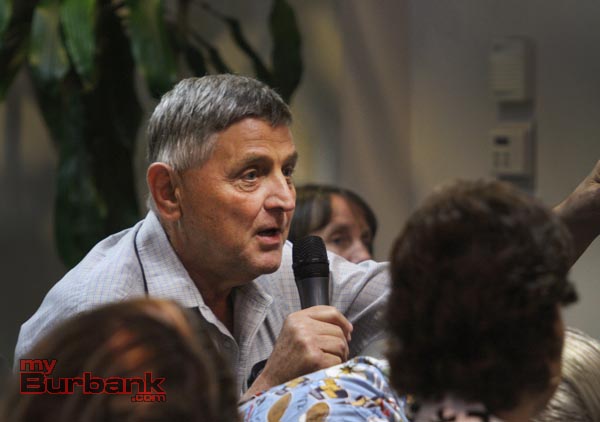 Members of the Authority emphasized several times that the number of gates will remain the same, thus limiting the number of takeoffs and landings to the current capacity of the airport. They also mentioned that with upgraded facilities, slightly longer planes able to carry more passengers would be able to use the airport, resulting in actually fewer flights. These newer, longer planes, 737s and 800s, are more recent technology and quieter than the planes currently using the airport. Noise abatement programs would also continue. 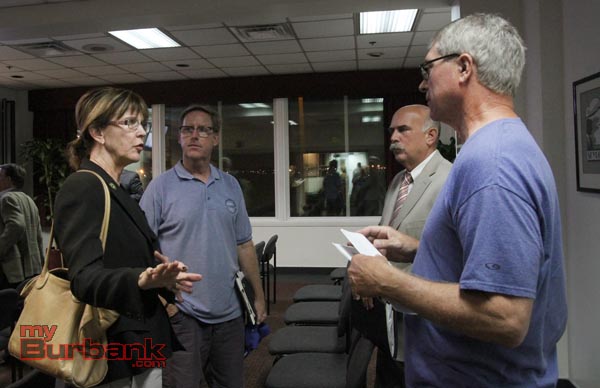 The Authority has worked very hard to answer community concerns and they still do have some work to do to answer some questions more accurately. Of particular interest at the question and answer session was the need for more definitive numbers, all the way around. The workshop provided the first look at the proposed replacement terminal, but not much was discussed about the potential economic development area of the adjacent 58-acre parcel.

Measure B Vote About 20 years ago when the FAA told the Airport Authority the terminal was too close to the runway and moving the terminal was brought up to the city of Burbank, several homeowners groups got together to protest the proposal, shook up the makeup of the City Council and struck a deal with the Authority covering noise abatement costs. Because of the provisions passed years ago by Burbank voters in Measure B, in mid-2015 Burbank voters will have the opportunity to decide the future of the Burbank Bob Hope Airport and the City of Burbank’s proposal for a replacement terminal and nearby development of the 58-acre parcel.

While there has been historic acrimony between the Airport Authority and the Burbank City Council, at this point in time, both groups have realized the importance of working together, with the community, in order to make real progress that addresses residential and business concerns, along with the economic, government, safety and environmental factors of the current age. Estimated costs for the replacement terminal discussed is currently about $300-400 million dollars, and would not be paid for by the local tax base of Burbank, Glendale and Pasadena, but rather through federal money, the airport, operators, passengers and vendors.

“This is about getting public input into this process. We want to hear from the public and what they think about a vision for a replacement 14-gate terminal building,” states Mr. Feger. “What this effort represents is the City of Burbank, the Burbank-Glendale-Pasadena Airport Authority, airport users and the public working together for a better future.”

The majority of Burbank voters, surveyed in a 2012 public opinion poll, support the construction of a replacement terminal with the same 14 gates as the current terminal, located farther away from the runways to meet FAA standards and built to meet earthquake standards. Most people surveyed also commented they would like to see more passenger amenities in a replacement terminal and preserve the convenience and ease of use the Burbank Bob Hope Airport currently provides.

Information & Feedback Online A complete video recording of the presentation from the morning of September 16 and other Commission meetings are available online here. The complete community questions and comments section will be posted online shortly, on the same website. Members of the community are encouraged to email questions and comments to the Airport Authority regarding the future plans for a new terminal and the possible development of the frontage parcel along Hollywood Way from Winona Ave. to San Fernando Rd. and Cohasset St., via the comment form found on their website. The next free, public Community Workshop will be held at 5:30 p.m. at the Burbank Airport Marriott on September 26 and parking will be validated.