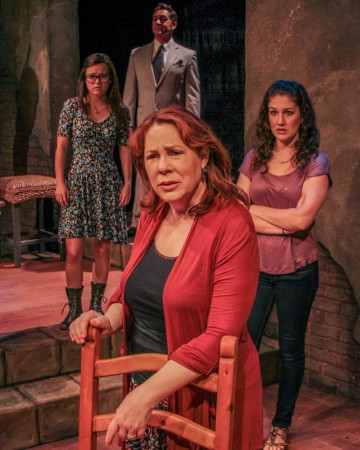 “You take one look and you say ‘authentic’,” remarked a fellow audience member as we both admired the set design. “Authentic” describes the entire play. TAYLOR GILBERT gives us an exceptionally realistic portrayal of raw emotional and physical suffering. Her work demands serious consideration for an LA Drama Critics Circle award for Lead Performance.

The play begins with Type A Anna (TAYLOR GILBERT) orchestrating the preparation of the annual Thanksgiving dinner. It’s second nature to a hands-on manager like her who’s been running a successful restaurant since forever.  She squabbles with her equally strong-willed, college-aged daughter Callie (DANI STEPHENS), with Anna’s down-to-earth mother Vivian (BRYNA WEISS) as referee and occasionally effective keeper of the peace.

Meanwhile, brainy and open-minded younger daughter Evie (HANNAH MAE STURGES) is coaxing her artistic father Tal (KEVIN McCORKLE) to leave off working on his sculpture and get ready for the big meal. Make that “minefield.” His brother-in-law Ben (JOHN CRAGEN) is an ambitious politician who looks askance at his artistic creations. And his wife Zoe (ANNA CARINI) is a Christian evangelist who’s troubled by the casual atheism of Tal and his family. Anna: “We believe in science and art…and food.”

They’re about to have Thanksgiving dinner together. 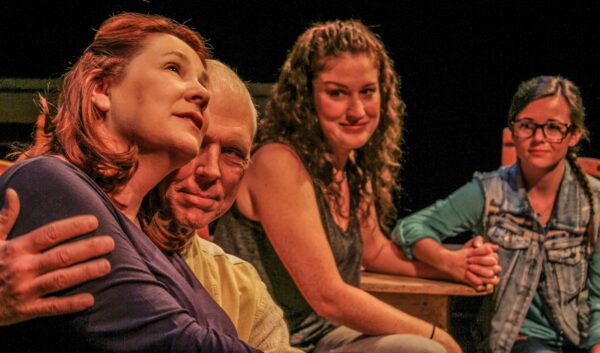 They’re also about to have an uninvited guest: The Man (JACK MILLARD.) That’s when Sovereign Body leaves mere excellence behind and enters into the fresh realms of genius.

Kudos to playwright EMILIE BECK for creating a story of enduring power. Kudos to director SCOTT ALAN SMITH for making all the instruments of stagecraft play together beautifully. And kudos to all the actors for reminding us why so many people long to create the magic they created in Sovereign Body.

Sovereign Body continues through May 24 at the Historic Lankershim Arts Center, 5108 Lankershim Blvd. Performances are Fridays and Saturdays at 8 p.m.; Sundays at 2 p.m. Tickets are $34. For tickets, please call 866-811-4111 for details or visit www.RoadTheatre.org to purchase tickets online or to view the complete schedule.