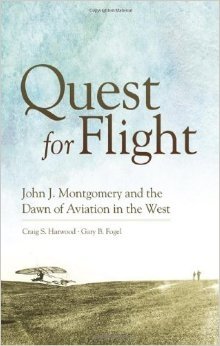 Author Craig S. Harwood visits the Burbank Central Library Thursday evening to talk about aviation pioneer John J. Montgomery, the subject of his book Quest for Flight. Montgomery and a group of Californians turned their ideas and dreams into reality with the first flight of a heavier-than-air craft in 1883 near San Diego.

While the Wright Brothers have collected much of the fame and recognition for the first flight, the true story of Montgomery and his associates has been largely ignored, even though the story was made into the 1946 historical movie Gallant Journey. The movie, starring Glen Ford and Janet Blair, followed the aviation pioneer’s efforts to build and fly gliders from childhood through his death in 1911.

Quest for Flight compiles historical fact and context to bring the truth of the earliest American aviation pioneers to light.

“Our purpose in writing this book was 1) to define John J. Montgomery in history, and 2) redirect the focus of traditional American aviation historical narratives (geographically speaking) from the east to the west to show that California based men and women made pioneering contributions in the aerial fields (aeroplanes, ballooning and airships) around the turn of the nineteenth century,” Harwood commented.

“Another intriguing aspect of the narrative of Quest For Flight is how it draws out of obscurity the role that women played in this visionary field of aeronautics and the resulting impact it had on societal attitudes toward women engaged in a male dominated and high risk field,” he added.

Co-written with author Gary Fogel, Quest for Flight has won a number of prizes and awards and garnered acclaim from reviewers. Harwood, a distant relative of Montgomery, will also sign copies of the book after the program.

The Central Library is located at 110 N. Glenoaks Boulevard and the program runs from 7 to 8:00 p.m. Copies of Quest For Flight will be available for purchase.