Author Kartik Hosanagar talks about the widespread influence of algorithms on everyday life in his new book, A Human’s Guide To Machine Intelligence, at the the Buena Vista branch of the Burbank Public Library on Wednesday evening, April 3.

“Algorithms touch our lives every day, from how we choose products to purchase (Amazon’s “People who bought this also bought”) and movies to watch (Netflix’s recommendations) to whom we date or marry (Match.com or Tinder matches),” commented Hosanagar. “In our imagining, we generally nod politely at recommendations by algorithms and make our own choices.”

“Algorithms are also advancing beyond their original decision-support role of offering suggestions to becoming autonomous systems that make decisions on our behalf,” Hosanagar continued. “For example, they can invest our savings and even drive cars on their own.”

“They are also a part of the workplace – for example, advising insurance agents on how to set premiums and helping recruiters shortlist job applicants. There are very few decisions we make these days that aren’t touched by algorithms.”

“The first wave of artificial intelligence has already arrived, and it is currently being used more pervasively in influencing how we make decisions than most of us realize,” commented Burbank Librarian Hubert Kozak, who organized the event. “Unfortunately, most of us have become aware of the use of algorithms when they are suspected of being responsible for some undesirable, or unintended result or some catastrophic tragedy. They are not ‘evil’ or rogue technology.”

“Machine intelligence has the potential to improve our lives in dramatic ways,” Kozak added. “What Hosanagar is concerned about is the area of interface between humans and these machines, the issues about how we will be able to come to trust what they do.”

“He argues that this will come from us having an understanding of how they work, their ability to make clear to us how they derive particular decisions (explainability), the amount of control we are able to retain about their decisions and transparency from developers and companies about the data used to ‘train’ them.”

“We tend to think of algorithms as objective decision-makers but they are in fact prone to many of the same biases we associate with humans,” said Hosanagar. “A recent example is the use of algorithms in U.S. courtrooms to compute risk scores such as a defendant’s risk of re-offending.”

“These scores are then used by judges, parole and probation officers to make criminal sentencing, bail and parole decisions. Recent research shows that these algorithms were biased against black defendants.”

“An important moment of insight for me as I was writing this book came from realizing that we can better understand the causes of rogue algorithmic actions by looking at what drives problematic human behavior,” Hosanagar added.

“In psychology and genetics, human behavior is often attributed to the genes we are born with and our environmental influences – the classic nature-versus-nurture argument.”

“It turns out that algorithms are no different. The actions and behaviors of early computer algorithms were fully programmed by their human creators. This was their nature.”

“However, modern algorithms also learn big chunks of their logic from real-world data. Much as a child observes and learns from her environment, modern algorithms learn how to drive cars and chat with people by observing humans doing the same tasks.”

“This is their nurture and it is starting to become more important as AI is being used more and more. So, many of the biases and unpredictable behaviors of modern algorithms are picked up from the data on which AI algorithms are trained. In short, our algorithms are hanging out with bad data!”

Hosanagar has proposed some checks and balances for regulators to consider in A Human’s Guide To Machine Intelligence. He also talks about rights that every person affected by algorithms should expect, what he calls an “Algorithmic Bill of Rights.”

“This as an important social issue, one that relates to information access, searching, and control (as well as privacy) and it seems to me that these are particularly appropriate issues for a library to bring to people’s attention,” Kozak also said. “Those have always been the work and concern of libraries, but now organizing and making useful the information in the world is something that online mega-companies do, for profit, and that can compromise the information product you get.”

“People need to be aware of that.  This book is a basic primer for the non-specialist, a lucid overview from a talented teacher and speaker.”

As the John C. Hower Professor of Technology and Digital Business and Professor of Marketing at The Wharton School of the University of Pennsylvania, Hosanagar’s research focuses on the digital economy and the impact of analytics and algorithms on consumers and society, internet media and marketing and e-commerce.

Hosanagar has some predictions on what people will see next for technology, Artificial Intelligence and algorithms.

“In the next five years, we will see lots of driver-less cars on the road. We will have AI assistants running our lives for us. And we will have AI companions and chatbots that we will be interacting with,” he said.

For more information on the author and his book, visit his website here.

Hosanagar presents A Human’s Guide To Machine Intelligence at 7:00 p.m. on Wednesday, April 3. The Buena Vista branch of the Burbank Public Library is located at 300 N. Buena Vista Street in Burbank. The event is free to the public and there is plenty of free parking available on site. 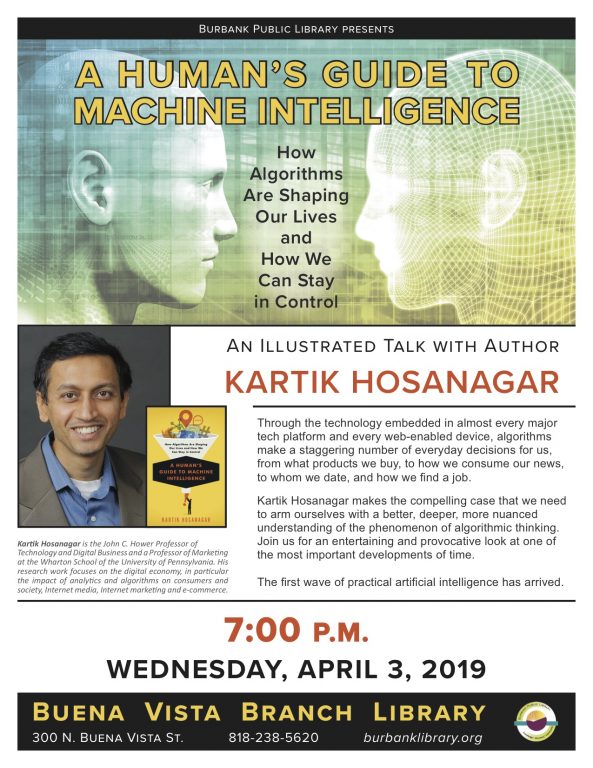